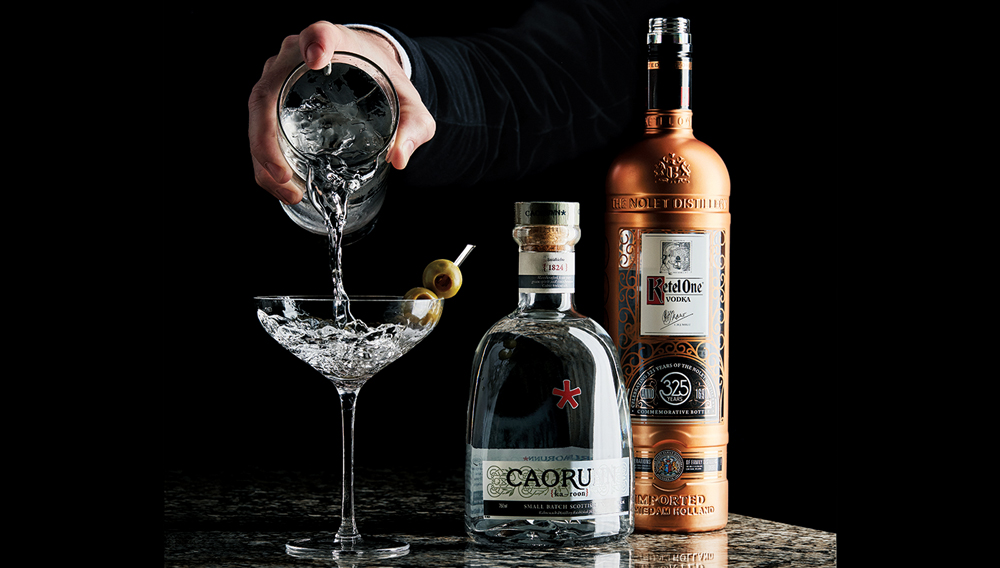 Caorunn Scottish Gin
When one thinks of London, one often thinks of gin. But when one thinks of Scotland, that thought rarely occurs. At least, not until recently. The U.K. nation is in the throes of a gin craze, and this trend includes the newest Speyside gin, Caorunn, named after the Gaelic word for the rowan berry. This acidic red fruit is one of five wild-foraged Celtic botanicals used in the creation of this light and spicy dry gin. Produced in the Balmenach Distillery, which dates from 1824, Caorunn offers an ideal way to enjoy what is rapidly becoming one of Scotland’s most fashionable drinks, the gin and tonic ($40).

Ketel One 325th Anniversary Bottle
To commemorate 325 years of distilling, Nolet’s company president Carolus H. J. Nolet and his 11th-generation sons Carl Jr. and Bob decided to spotlight Ketel One, which is named after the distillery’s original coal-fired copper pot still, Distilleerketel No. 1. To pay tribute to this crisp, soft European winter-wheat vodka, which combines copper pot and column distillations, the Nolets created a limited-edition, 1-liter bottle with matte copper plating and gold embossed coins. When asked if a special spirit was made, Carl Jr. replied, “The bottle contains Ketel One, because it’s the best vodka we know how to make” ($32).

Mount Gay Origin Series: the Copper Stills Collection
There are two basic ways to distill rum: in a continuous column still and in a pot still. Except in the case of most white rums, both methods result in a distillate that is then aged. However, the flavors produced by column and pot stills are different, and opinion is often divided as to which—if either—is better. To enable aficionados to experience the differences in distillation, Mount Gay’s master blender, Allen Smith, has assembled a set of two 375 mL bottles of rum identical in components and aging; the sole distinction between the pair is that one of the rums has been column distilled, while the other has been pot distilled (Mount Gay normally blends both types). We found the column-distilled rum to be smooth, creamy, and mildly sweet, while the pot-still version, which was slightly smoky and buttery, revealed more spice. But now, for the first time in this brand’s 314-year history, aficionados can taste the difference for themselves ($95).

Casa Noble Alta Belleza
Casa Noble’s founder and maestro tequilero, Jose “Pepe” Hermosillo, has been crafting premium, award-winning tequilas since 1997, continuing his family’s seven-generation tradition. Today, his Casa Noble distillery in Jalisco, Mexico, is one of the few that produce only certified organic, kosher tequilas. Now Hermosillo has created his rarest tequila yet, the first of a limited series to be brought out once each year under the banner of Colección del Fundador. Alta Belleza (“high beauty” in Spanish) is a single-barrel, triple-distilled extra añejo that has been aged for 5 years in French oak. The tequila was then finished for an additional 6 months in French oak wine barrels formerly used to age Robert Mondavi’s renowned To Kalon Cabernet Sauvignon. This deep amber liquid exudes rich flavors of cooked agave mingled with traces of almonds, cinnamon, and other spices. Only 563 bottles have been produced ($1,200).