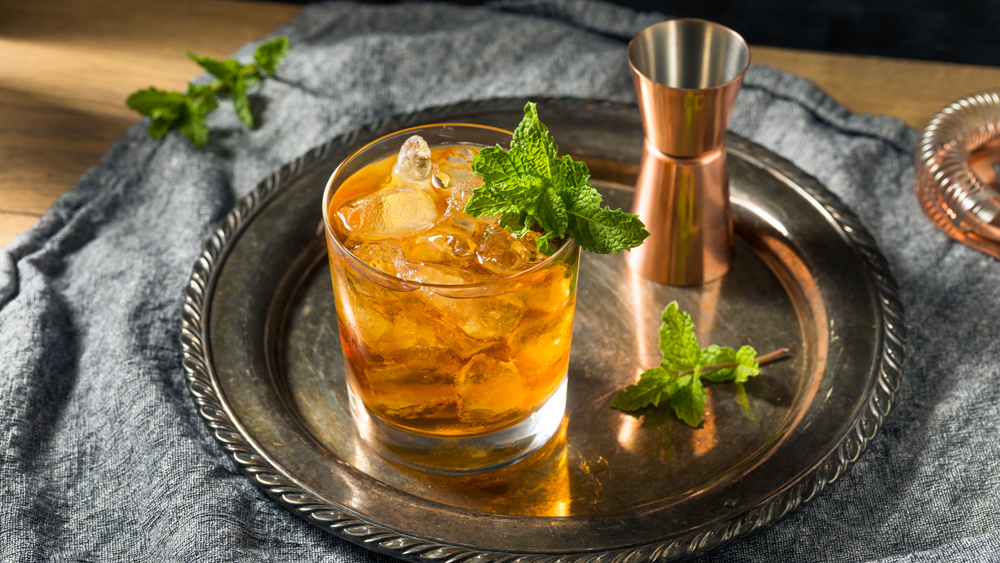 There’s an issue with the Stinger, a disconnect between what it is and what people think it is, and it needs to be resolved before we can really talk about it.

It helps to disambiguate: What is a stinger? What image does the word “stinger” conjure? To me it sounds like a missile, or some minor routine torture that older brothers visit upon their siblings. The most common use of the word is to describe the part of a bee that sucks. A stinger, generally, conveys a swift sharp strike. It stings.

Contrast this with what you perhaps think you know about the Stinger cocktail. The second I say “creme de menthe,” I can feel your imagination becoming sepia-toned, and if you’ve even heard of it at all, you probably think it’s something soft and sweet and hopelessly antique. But here’s a question—if it’s so soft, why is it named after a quick punch to the head?

Contrary to popular opinion, the Stinger can indeed sting. Weighing in at a record low of two ingredients, the Stinger is just a combination of creme de menthe (a mint liqueur) and Cognac, and it has more in common with a Mint Julep than a Grasshopper. It is not a relic and it’s not sweet, or at least it doesn’t need to be. The Stinger is like a Cognac Old Fashioned, if you replaced the part of the Old Fashioned that isn’t alcohol (the sugar) with more alcohol. And if that still sounds to you like something for your great grandmother, then I want to hang out with your great grandmother.

The Stinger can be a phenomenal drink, strong and rich and cooling, achieving a depth and complexity that is legitimately confusing considering it’s about as hard to make as a vodka soda. It comes to us from the turn of the century, and its provenance is unknown—even our most diligent cocktail historians haven’t the first clue who invented it, and of course it doesn’t really matter. What matters is how to make it, but here we have a new problem: Not too little information, but too much.

Lots of people have published recipes for the Stinger, and everyone agrees on the ingredients and garnish—it’s the ratios and the preparations that are all over the place. I won’t list the recipes themselves in the interest of space, but when I think of my favorite sources of classic cocktail information—Death & Co, Jim Meehan’s Bartender’s Guide, David Wondrich’s Imbibe!, the Bartender’s Choice app, Punch, Imbibe, Liquor.com, and more—every one of them has a recipe for a Stinger, and I’ll go ahead and tell you that every single one is different. Is the Stinger a sweet shaken mixture of equal parts Cognac and liqueur? Or a dry stirred Cognac drink with barely any creme de menthe? Is it served on crushed ice, or on cubed ice, or on no ice at all?

With all of this in mind, I humbly present three options, for three different Stingers. The one to make depends on what you want from it and where you are in the course of your evening, but I assure you, no matter what you’re in the mood for or what century you’re in, there is a Stinger for you.

Add ingredients to a rocks glass with crushed ice and stir for five to eight seconds. Garnish with a mint sprig and enjoy.

This is my favorite version—sufficiently dry enough to not be confused with a dessert cocktail, but still explosively flavorful. Now, the Stinger is unusual in that it’s an all-booze drink that many recipes nonetheless instruct to shake (as opposed to stir). I do not recommend this, as it thins out the texture and makes it all a little weird. But what those recipes are aiming at—a healthy amount of dilution—is absolutely correct and important. Crushed ice solves that problem handily. In fact, this cocktail is nearly impervious to overdilution: The longer it sits on the crushed ice, the better it gets.

The Cognac Old Fashioned with a hint of Mint

Add ingredients to a mixing glass with ice and stir well. Strain into a cocktail glass without ice and garnish with a mint sprig.

This recipe, taken more or less whole from Jim Meehan’s Bartender’s Guide, is the most subtle of all the Stinger builds, the creme de menthe subdued to the point where it’s just a slightly minty exhale on what is otherwise a Cognac Old Fashioned. A great substitution for an Old Fashioned any time an Old Fashioned would be called for, which is to say, pretty much any time after sundown.

Dessert for Someone Named Gertrude

Add ingredients to a rocks glass with crushed ice and stir for five to eight seconds. Garnish with a mint sprig and enjoy.

This is the closest thing to what most people imagine when they imagine a Stinger—something very sweet and intensely minty. This is designed to be the last cocktail you have on any given night, as it’s the mixological equivalent of brushing your teeth.

Cognac: For the combination of price and taste, I love the Pierre Ferrand 1840 Cognac in this drink, a slightly higher proof bottling literally built for cocktails. If not that, learn toward a richer style—if you use too light a Cognac the cocktail will want for depth, but it’s not like it’ll be bad. The only thing that’s bad is that some Cognacs, in this drink, have a strange earthiness that clashes with the mint. It’s an individual brand feature, not a general style, so either use the Ferrand or just know that some otherwise great brands like Frapin don’t seem to work for this particular drink.

White Creme de Menthe: The success or failure of your Stinger will be based on what brand of creme de menthe you get, because in order for a cocktail to work with only two ingredients, both have to be good. The two liqueurs I have had and endorse are either Tempus Fugit Creme de Menthe or Giffard Menthe-Pastille. Honestly, it’s hard to just stumble into making Stingers, so if you’re setting out to do so, it’s worth the effort to get the good stuff.

Other Ingredients: Some recipes call for a bit of gin spliced in or a bit of simple syrup or some orange bitters or absinthe. I tried all of them and they’re all pretty good, but they’re not better. It’s more satisfying and delicious to calibrate your Cognac and creme de menthe to work together just the way you want them to, as opposed to recruiting ingredients that don’t belong. In other words—instead of adding a laugh track, spend more time on the jokes.