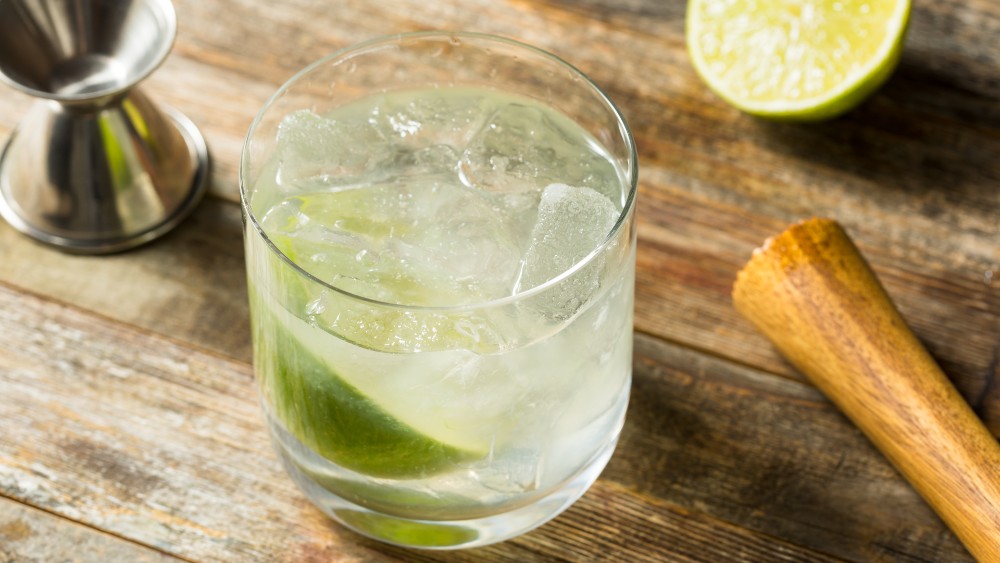 Don’t be fooled by the Ti’ Punch. Sure, the ingredient list may seem innocuous, seductive even—rhum, lime and sugar? Why, that’s practically Mojito territory! And sure, they are enjoyed, exuberantly and in some quantity, by seemingly every adult in Martinique and Guadalupe regardless of age, gender or outward capacity for drink. Both of these facts might lead you whistling towards a Ti’ Punch, expecting a hug. This would be wrong. The clue is in the name—don’t think “punch” like something fruity ladeled from a pewter bowl. Think “punch” like a quick blow to the head.

The Ti’ Punch—Ti’ being Creole word for “petite,” meaning little—is the national drink of the French speaking Caribbean islands of Martinique and Guadalupe. It is thought of as an aperitif and is offered as a matter of courtesy before every meal but breakfast. Frequently, your Ti’ Punch won’t be made for you so much as you’ll be directed to a do-it-yourself Ti’ Punch station that your host has arranged on a counter somewhere. You trot over to it, and make it, by tradition, like so: To a rocks glass add about a teaspoon of a cane sugar syrup, squeeze a quarter-sized disc of lime, and a couple ounces of rhum agricole blanc. You stir to mix it all together, et voilà, you have yourself a Ti’ Punch.

What’s so rough about that? Well, let’s start with the spirit—in the French Caribbean they make rhum (as they spell it) from fresh sugar cane juice as opposed to molasses, so their rhum agricole is grassy and funky and frankly a little weird, offered via double-barrel blast of being unaged (no oak to soften the spirit’s eccentricities) and high proof (between 50-55 percent alcohol). Then there’s the recipe itself, the quantity of the ingredients. There’s only the smallest bit of sugar and a few drops of lime juice—this is not a twist on a Daiquiri, it’s a twist on an Old Fashioned, with lime instead of bitters. And finally—notice anything missing? How about ice? While many people (including me) do add ice, for traditionalists, this is strictly a room temperature cocktail, and in Martinique, that room is often in the high 80s.

So why, you might be asking, would anyone drink a hot, overproof, weird, unaged rhum Old Fashioned? Because once you acquire a taste for rhum agricole, you fall in love with it. Like mezcal to tequila, rhum agricole has a depth and complexity that can make regular rum seem sanitized and even a bit anodyne. What’s more, the Ti’ Punch is, in my humble opinion, the best possible way to drink the spirit, highlighting all of its charms and nuances and filing off some of its sharper edges. It’s one of the handful of cocktails in the industry that enjoys a universal respect—saying Ti’ Punch is your favorite drink is like saying Jean Luc Godard is your favorite director, an unimpeachable (if sometimes pretentious) choice.

The magic of travel is such that if you’ve been to Martinique or Guadalupe, the sights and sounds and boundless charm of the locals has likely already primed you to fall in love with the Ti’ Punch. If you haven’t had the pleasure—and haven’t been turned off any of the above—I encourage you to give it a try. Order one at your local rum or cocktail bar. Just do yourself a favor—add ice.

To a rocks glass with ice, squeeze 10-15 drops of lime into the glass, add the syrup and rhum, and stir briefly to incorporate. Take a sip, and imagine the sound of waves lapping gently against a sandy shore.

Rhum Agricole Blanc: There aren’t that many distilleries on these islands, and they all make good rhum: Rhum JM, Neisson, Clement, La Favorite, Saint James and others. I’m partial to the Clement Blanc Canne Bleue, but it’s not necessarily superior to the rest, it’s just what I have the most experience with. Any of them will make a good Ti’ Punch. And while most of these distillers make a 40 percent ABV spirit for export, if you want the traditional experience, make it 50 percent minimum.

That being said, a number of producers outside those islands make r(h)um from sugar cane juice as opposed to molasses, and many of them are quite good. If you’re interested in the idea of a Ti’ Punch but don’t feel ready for the full intensity, feel free to go with a softer “agricole” style rum like Copalli, from Belize, that is lower proof and less funky than its island cousins.

Cane Sugar Syrup: One thing that everyone does down there was use a syrup made from sugar cane juice. There are a few different producers—JM Sirop and Petit Canne Syrup and many others—and you can find it at any decent cocktail supply store.

Similar and much easier would be to make a demerara syrup: Get some unrefined demerara or turbinado sugar (“Sugar in the Raw” or similar) and mix it equal parts with hot water, and stir until the sugar dissolves. You could do plain white sugar if that’s all you have, but you lose some of the rustic molasses character of the sugar, and it doesn’t taste as good.

Lime: One of the reasons for the tradition of the mix-it-yourself Ti’ Punch station—what they delightfully refer to as “Chacun prépare sa propre mort” (everyone prepares their own death) is the divergence in terms of quantity of lime desired. While traditionally it’s just a few drops, you can do as much as you like. I’d say the acceptable range is between 1/4 oz. (a squeeze of a good-sized wedge or two) and none (just the lime oil from the peel). Too much and you start getting into daiquiri or Caipirinha territory, which is a different drink altogether.