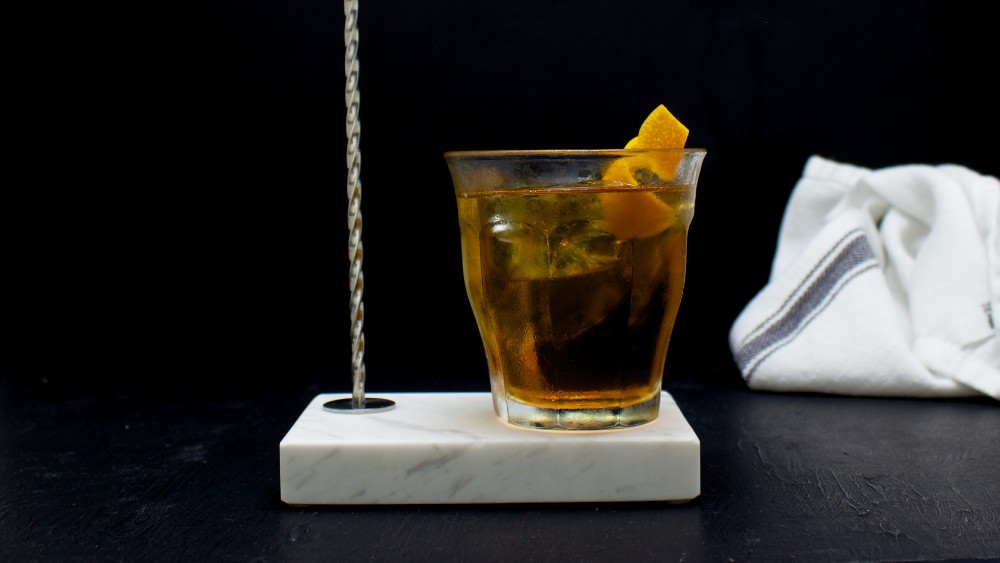 Toronto is, by and large, a charming city full of kind people, the sort of place that venerates a beaver with the sort of people who’d apologize to you if you hit them with your car. The Toronto cocktail, on the other hand, is dark and intense, and aggressive as a rutting moose. The Toronto is what would happen if you took a swig of rye whiskey straight from the bottle and thought to yourself, “too soft,” the liquid translation, perhaps, of the city’s winter weather. It is also resolutely delicious, and one of the all-time best answers to the request for a final drink on a cold night. Whether you’ll like it just depends on the extent to which you read bitterness as punishment, and if that kind of punishment is something you enjoy.

In 1922, a Belgian barman working in London named Robert Vermeire wrote a brief recipe book with the fairly workaday title Cocktails: How to Mix Them. His book is unusual for the era in that it attempts to credit when possible the inventor of the drinks within it. For many of these drinks, though, inventor is unknown, so Vermeire simply fills in a bit of context. To the Fernet Cocktail, for instance—a mixture of Fernet Branca, a touch of sugar, a couple drops of bitters, and either “Cognac Brandy, or Rye Whiskey to taste”—he adds by way of pedigree, “This cocktail is much appreciated by the Canadians of Toronto.”

Cognac or Rye? Recipes are instructions, and instructions hate ambiguity, so by 1930 the Fernet Cocktail had bifurcated. “Cocktail” Bill Boothby’s World Drinks and How to Mix Them has two otherwise identical drinks, both with Fernet Branca, a touch of sugar and a couple drops of bitters—the Fernet Cocktail, committed now to using brandy, and the Toronto, which uses whisky. It iterates further still once David Embury gets his hands on it in 1948, who decides that because it’s called a Toronto, that whiskey should be Canadian (Embury was also the one who thought the French 75, being “French,” should use cognac, a facile observation that echoes to this day). Even later, some unnamed commenter asserts that because it’s from Canada, the sweetness should be maple syrup. This helps account for the dizzying variety of slightly tweaked recipes out there. We should consider ourselves lucky no one tried to dress it in denim and a warm hat.

“The Toronto Cocktail is probably one of the best uses of Fernet Branca I have discovered to date,” wrote Canadian bartender Jamie Boudreau, in 2006. Boudreau had immigrated to Seattle and would go on to open the iconic Canon, but at the time was an early leader and writer in the cocktail renaissance. He discovered the Toronto in Embury’s book and immediately had the good sense to use rye whiskey, seeing that the Toronto is essentially an Old Fashioned spiked with the dark and bitter Fernet Branca.

So, to recap, this is a cocktail created by a Belgian working in London, using an Italian liqueur, and named “Toronto” by an American. “It is rather ironic,” Boudreau wrote, “that I had to leave Canada for the United States to discover the Toronto cocktail.” In fairness to him, though, there’s really nothing Canadian about it.

Add ingredients to a rocks glass with the largest ice you have that will fit. Stir for 6-10 seconds, and garnish with an orange peel.

Fernet: This is one of those recipes for which the proportions change depending on who you ask. Most will say to use 0.25 oz Fernet, which adds a subtle minty spice on the finish, while some use 0.75 oz, which has all the subtlety of a dogfight. I like to split the difference—at 0.5 oz, it’s more than just an accented Old Fashioned, retaining a distinct character without getting to be too much.

As for which Fernet—Fernet Branca was the first and created the category of Fernet, and is called for by name in the recipe. Some cocktails that call for Fernet Branca really need the particular fingerprint of that brand to work, but the Toronto is not one of them—you can use any of the dozens, perhaps hundreds, of different types of Fernet, and they’ll all be good. Use any Fernet you like.

Rye: I haven’t had a style of Rye that I haven’t liked this with, but if I had to choose a favorite, it would be the same style I like best for Old Fashioneds, which is high-proof Kentucky style—the fullness of Wild Turkey 101 or Russell’s Reserve is great here. It needs to be big and bold to stand up to the Fernet. Some people talk about using bourbon, but for me, bourbon wants for tension and spice. And if you insist on using Canadian whiskey, use one that is 100 percent rye, like Lot 40. Things like Canadian Club are too soft.

It’s also worth noting: The above recommendations are if you’re using 0.5 oz or more of Fernet. If you end up reducing the Fernet Branca to 0.25 oz, as many recipes advise, your options for base spirit increase—it doesn’t need to dig in quite so much to stand up to the Fernet, so I’d still advise rye, but you can use really whatever rye you want.

Simple Syrup: Fernet Branca has some sugar, but not much, and a Toronto without simple syrup is mean as hell. Also, ignore suggestions for maple syrup instead of simple syrup. It just adds noise. (To make simple syrup: Combine equal parts sugar and hot water, and stir for about 30 seconds until the sugar dissolves. Keep it in the fridge, and it’ll last a month.)

Bitters: The original recipe calls for “two drops” of Angostura Bitters, and many modern recipes follow suit. My recipe, above, does not. Bitters transform the Fernet to be almost ginger-bread like, which is different and not bad, but they also interfere with the minty fireworks on the finish. For me, they take away more than they add.

Glassware: I honestly can’t decide if I prefer this on the rocks or up. Almost all recipes call for it to be served up, which is earnestly great—the herbaceousness evolves as it warms, which is cool, but the sweetness has to be pretty exact to not start to be a problem. On ice, sweetness isn’t a problem because it stays cold and loosens up with more dilution, but you lose a small amount of the herbal charm. Everything has tradeoffs. If I had to choose, I’d say serve this like an Old Fashioned on ice, but up is also great. Try both and do the one you like more.

Garnish: Boudreau notes that “the orange zest is a must as it helps to brighten up an otherwise dark drink,” and I couldn’t agree more. Lemon peel also works for brightness, but orange peel is friendlier.