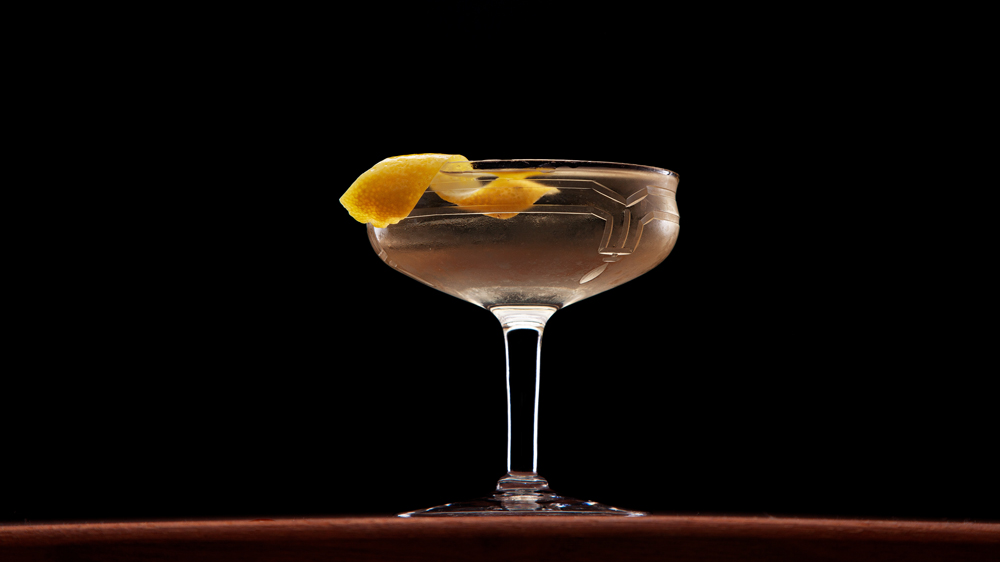 If the Martini is a tailored suit, then the Tuxedo No. 2 is, well, a tuxedo. It’s a dressed-up Martini—or perhaps dressed down, more on that in a moment—but in either case it’s a Martini with a bit of extra panache. It trades the Martini’s diamond-like clarity and simplicity for the resonant depth of maraschino and the punch of absinthe—a bold act, perhaps, but also one that earns the cocktail its name.

In the summer of 1886, a young financier named James Brown Potter attended a social club party in upstate New York. He had recently returned from a trip to England, and decided to show off the newest in English fashion, something he had picked up from the Prince of Wales himself—an ordinary tail-coat, essentially, but with the long back tails removed. Up until then, proper occasions demanded white-tie formality, tails and all. Potter was in his mid-30s, and this brazen impetuousness caused much huffing among the gentry (the face tattoos, perhaps, of his time). His generation, however, loved it, as many of them found the full evening dress of white ties and long tails and waistcoats to be archaic and cumbersome. In England, this style would come to be referred to as a “dinner jacket,” but in America, seeing as Potter’s little sartorial revolution started at the Tuxedo Club in Tuxedo Park, New York, they just ended up calling it the “tuxedo.”

About a dozen years later, a cocktail shows up in Harry Johnson’s 1900 printing of his Bartender’s Manual, called, simply, the “Tuxedo Cocktail.” Vermouth was new at the time, and the Martini wasn’t yet the cultural juggernaut that it is today; the Tuxedo wasn’t a take on the Martini so much as they were peers, just a couple elegant uses of this cool new vermouth stuff that was recently available in America.

Both the Martini and the Tuxedo would continue to evolve—there are at least five iterations of the Tuxedo in the next few decades, each subtly different from the last. By the time Harry Craddock gets ahold of the recipe, published in 1930 in his standard-setting Savoy Cocktail Book, the definition had been scrambled a bit. According to Craddock, a Tuxedo was now just gin and vermouth with a dash of absinthe. Add some maraschino, orange bitters, a cherry and a lemon peel, though, and you have the exact recipe of Johnson’s original, which Craddock now calls “Tuxedo No. 2.” It’s unclear how this happened, but no matter: Craddock was a celebrity, and the American Bar at the Savoy Hotel was (and continues to be) a leading light of the cocktail world. It’s his labels that stuck.

As mentioned, it’s unlikely that bartenders in 1900 would’ve considered the Tuxedo No. 2 a Martini variation, but that’s certainly how we see it now. A Gin Martini is notable for its elegance and simplicity—the gin is the singer, the vermouth is the stage. The addition of maraschino and absinthe don’t fundamentally change that dynamic, they just frame it, a little richness from the bottom and zing from the top, respectively—there’s a couple more instruments playing in the Tuxedo No. 2, but it’s still very much the gin’s show. In that way, using different gins for this cocktail yield very different experiences, entirely dependent on the character of the gin you use. And while some gins work better than others, as the old saying goes, every gin looks good in a Tuxedo.

Add all ingredients to a mixing glass with ice. Stir for about 10 seconds (if using small ice) or up to 30 seconds (if using large ice), until cold. Strain into a stemmed cocktail glass, express the oils of a lemon peel over the top and garnish with the peel and, if desired, a cocktail cherry.

Gin: Despite all the ingredients, this is the gin’s show: if you like a particular brand of gin, you’ll like it in this cocktail. I’ll say personally, I prefer softer gins here, Plymouth or Hendrick’s or Martin Miller’s, just to name a few. Aviation makes a very cool version. Though my top recommendation, and the best Tuxedo No. 2 I’ve ever had, was made with Monkey 47, the super-soft, fairly expensive, absolutely delicious gin from Germany’s black forest.

Dry Vermouth: My go-to for Martinis is Dolin Dry vermouth, and that certainly works great here. I’d only add that while the vermouth has an unusually difficult job in a Martini—called upon to be somehow both present and absent—the Tuxedo No. 2 is much more forgiving. I still prefer Dolin, but use a lighter one like Noilly Pratt or a fuller one like Mancino Secco, and the Tuxedo No. 2 will be fine. Use whatever you like.

Maraschino Liqueur: There are many brands of maraschino liqueur. The one you can probably find is the straw-covered Luxardo, which works perfectly. To be honest, I haven’t tried many other brands in this cocktail—The Varnish in LA, for example, uses the Croatian brand Maraska—and I expect whatever brand of maraschino you use will be good, but stray from Luxardo and your mileage may vary.

Absinthe: It feels pedantic to demand some specific absinthe for cocktails. It’s not like different brands won’t bring different flavors, but you’re only using it a couple dashes at a time, so if I recommend St. George but all you have at home is Vieux Pontellier, it’s not like you need to go buy another bottle. My only strong piece of advice is to use real absinthe, and not try to cheat it with anisette or something—yes, absinthe is expensive, but one bottle will make several hundred cocktails. If you’re at the store right now, get something nice like the Pernod or St. George, stick it on your liquor shelf at home, and try to remember to dust it every six months.

Orange Bitters: I actually don’t use orange bitters when I make this cocktail. Particularly citrus-forward or floral gins don’t require them, and those are my favorite gins here, so when I make Tuxedos I omit the orange bitters entirely. I only mention them because pretty much all the classic recipes include it. If using them, use them sparingly.

Garnish: Classic recipes call for both a lemon peel and a cherry. The lemon peel is doing important work for the nose and overall effect of the drink—definitely use one of those. The cherry, on the other hand, is just a tasty aesthetic touch to make the cherry-based maraschino liqueur feel more at home. Use it if you want.