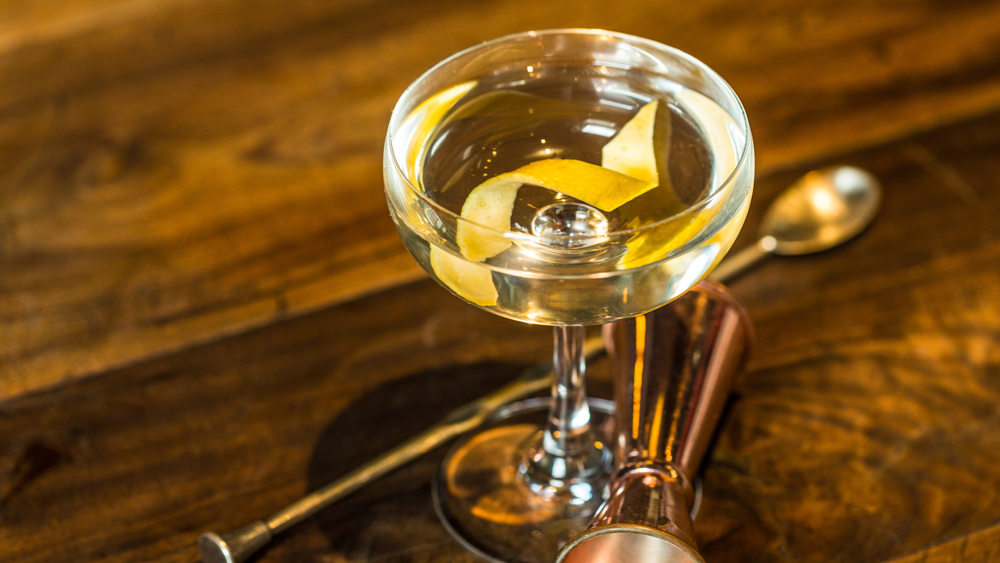 “You know that’s not half bad,” Bond said with a note of surprise, his eyes turning from his newly created cocktail to the smoky and elegant Vesper Lynd. “I’m going to have to think up a name for that.”

There’s a big question mark that lives in the heart of the Vesper cocktail, but it’s not any of the ones you’d expect. Classic cocktails often have unclear origins—twisted knots of faulty memory, incomplete history and outright myth. But not the Vesper. The Vesper’s central mystery remains despite the fact that we know pretty much everything about it.

We know it comes from Casino Royale, the first James Bond novel, penned into modest fame by Ian Flemming in 1953 and shoved onto the global stage by Daniel Craig in 2006. We know both the proportions and the preparation, spelled out with unusual alacrity by Bond himself: “in a deep champagne goblet… three measures of Gordon’s [gin], one of vodka, half a measure of Kina Lillet. Shake it very well until it’s ice-cold, then add a large, thin slice of lemon peel.” We also know it’s named for his alluring companion, Vesper Lynd. In the film, he names his drink after her as a cringey pick-up line (“because once you’ve tasted it, it’s all you want to drink”). The book is a bit more textured—he politely requests the use of her name for his creation because Vesper means evening in Latin which, he realizes, will be “very appropriate to the violet hour when my cocktail will now be drunk all over the world.”

No, the question plagues the Vesper is more diffuse and existential. And if it had to be expressed it would go something like this: What the hell are we supposed to do with this recipe?

It’s hard to know where to start. Well, how about the size—made as requested, this is a ludicrous four ounces of high-octane booze. The Gordon’s Gin and vodkas of the era were 94 and 100 proof, respectively, making this drink effectively a triple. If served as requested, it should be garnished with a palmful of Advil and a loaf of bread. Or how about the preparation—it’s practically cocktail gospel to stir drinks that have no juice or produce, not shake them, so why is this shaken? Or how about the ingredients—Kina Lillet doesn’t exist any longer, and its replacement, Lillet Blanc, while lovely, doesn’t even come close to having the body to stand up to these ratios. Or for that matter, how about the ratios themselves—this is an 8:1 ratio of overproof liquor to aromatized-wine, and even the most intense vermouth in the world is a candle in this kind of howling wind, providing neither the sweetness nor the body to do much of anything at all. And what is vodka even doing here anyway? Why is it important that one of the three ingredients taste like nothing?

It’s fraught. All of it.

However, these problems are solvable. And I’ve found three different ways to make a Vesper that makes sense.

James Bond’s Vesper a.k.a. The Original

Add all ingredients to a cocktail shaker. Add ice, shake hard for 10 to 12 seconds, strain up into a large martini or cocktail glass and garnish with a lemon peel.

This is as close to the original as I dare go, pretty much the same but for that the entire thing has been scaled down to accommodate a human frame. The ratios are conserved, as well as the intensity: Gordon’s gin, as mentioned, would’ve been 47 percent back then but is now 40 percent in the US, so our old friend Tanqueray can step in to shoulder the burden. As for the “Kina Lillet”—“Kina” referred to quinquina, the deeply bitter root from which its prime flavor was taken. The company reformulated in the ’80s to be brighter, lighter and less bitter, and it’s relatively established now that the Italian Cocchi Americano or the Swiss Kina l’Aero d’Or carry on the tradition, and the latter, being punchier and more sharply bitter, works better here.

This an intense, bracing drink. Shaking, as opposed to stirring, makes it thinner, colder and more diluted, which helps mitigate the booziness, while the aromatized wine provides a murmur of character in what is otherwise an icy cup of slightly thinned gin. A true Bond fan should try one like this at least once, if for no other reason than to know what it’s like.

The Conformity Vesper a.k.a. The Lillet Martini

Add ingredients to a mixing glass and stir for 15 to 20 seconds. Strain off the ice into a cocktail or martini glass and garnish with a lemon peel.

This is more or less what would happen if someone were to unbreak all the rules that the Vesper breaks, which is to say, it’s not a Vesper at all. We usually stir martinis, not shake them, because stirring preserves the silky texture of an all-spirit drink. The booziness is also reduced to standard levels, and vermouth increased in the form of Lillet Blanc, which—when not asked to lift eight times its own weight in high-proof spirits—is an absolutely wonderful foil to the spirits, while Vodka, tasting like nothing at all, is omitted in favor of more flavor.

Lillet Martinis are great. Whether or not it can even be spoken of as a Vesper is less clear, but it is, nonetheless, worth mentioning.

Add all ingredients to a cocktail shaker. Add ice, shake hard for 10 to 12 seconds, strain up into a martini or cocktail glass and garnish with a lemon peel.

If you came to my bar and asked for a Vesper, this is what I’d serve you. I like a softer gin like Plymouth to help the wine flavor shine. The vodka’s neutrality maintains the overall strength while keeping the gin from taking over. I also like Lillet in this build, but the more robust Cocchi feels more historically accurate (Kina l’Aero d’Or would be too bitter).

As for shaking vs. stirring: the presence of vodka here changes the game a little. For the first sip, the stirred drink is better, silkier, more seductive, but as it warms, the vodka becomes volatile and a bit unpleasant—if it’s shaken, on the other hand, the added dilution prevents this unpleasantness almost entirely. The lesson: if you’re using vodka in any real quantity, shake.

The resulting cocktail is strong but still light on its feet, its flavors subtle and sophisticated, more nods than wave, more glance than stare and not half bad. Mr. Bond, it turns out, may have known what he was doing after all.