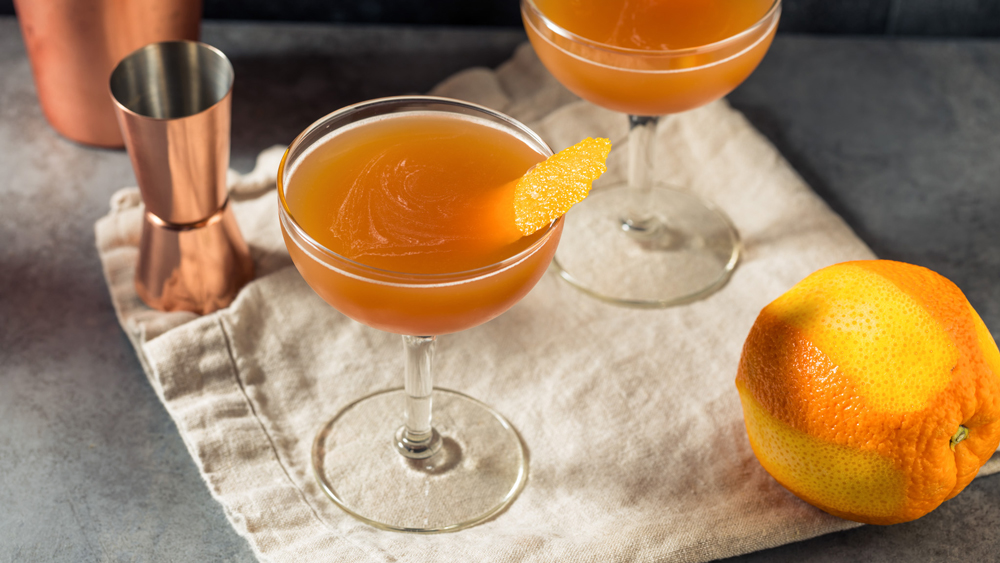 “A cocktail if it is to be of any value must have the quality of revivifying the drinker; it must lift him out of the doldrums of the workaday world and give him rosy visions of himself and his fellow-man.”

Just because something is famous, it doesn’t mean it’s good. If you’ve turned on a television in the last 20 years, you already know this, but it’s a fact worth acknowledging every now and again, when thumbing through the index of history.

The Ward Eight is a classic cocktail, said to be invented in Boston in 1898. It is generally understood to be a Whiskey Sour-like base of rye and lemon juice, with the addition of orange juice and grenadine. Now, if that sounds to you like something that was invented by a 9th grader, you’d be comforted to know that bartenders have been struggling with the recipe for a long time.

My favorite story about the Ward Eight comes from an article in Boston Magazine in 2006. A number of the city’s most talented bartenders had coalesced under the banner of the “Jack Rose Society,” putting their heads together to determine the best possible recipes for various drinks, or in their words, “to right the wrongs of misunderstood classic cocktails.” Being Bostonians, they soon turned their gaze to the Ward Eight (the city’s only classic cocktail) and announced the “Great Ward Eight Debate,” an evening of experimentation and deduction, and to which, fortunately for us, they invited journalist Anthony Giglio.

The event proved frustrating. They tinkered with it all night, but the Ward Eight stubbornly resisted greatness. They tried changing the whiskey, several types of grenadine, and ditching either juice, but it was too sweet or too tart or just not good. “A dozen mouth-puckering renditions later,” writes Giglio, “[Scott] Holliday asked politely, ‘Is it possible that this just wasn’t a phenomenal cocktail?’ The group exchanged pensive glances. Then Gertsen declared, ‘Sure!’ With that, the Ward Eight was relegated back to history, leaving the society to more-important matters.”

Ordinarily I’d be tempted to agree with this august group and just leave it at that, but I won’t for two reasons. The first is that while there haven’t been many advances in oranges, lemons or pomegranates in the last 16 years, rye whiskey has expanded astoundingly since 2006, which gives us a much more expansive color palate with which to paint. The second is that any cocktail can be great. It’s just a question of how much you’re willing to stray from its original recipe.

It’s hard to know if the Ward Eight is worth salvaging. On one hand, it’s a pre-prohibition classic, and we only have so many of those. Two bars have named themselves after the Ward Eight, and it was cited as one of Esquire’s “Ten Best Cocktails of 1934.” On the other hand—at what point do we admit that sometimes classics are “classic” just because everyone says it is? Case in point: Regarding the Esquire article, it’s often mentioned that reporter Frank Shay included the Ward Eight as one of the ten best cocktails of 1934, but what’s almost never mentioned is what he actually says about it:  “Personally I do not care for this tipple,” he wrote, “but it deserves a place of honor because it has survived and because many otherwise reputable persons call for it.”

Add all ingredients to a cocktail shaker with ice, shake hard for eight to 10 seconds, and strain into a cocktail or coupe glass. Garnish with an orange peel.

Orange Juice: Must be fresh. Of all the main citrus juices, orange is the one with the most dramatic difference between fresh and even 1-day old. Fresh orange juice sings. Insist on it.

Grenadine: Grenadine is a pomegranate syrup and can be bought commercially if you like—Small Hands Foods and Liquid Alchemist come to mind, but anyone who uses real ingredients would be great. Avoid Rose’s.

You can also make it yourself—it’s equal amounts of pomegranate juice and sugar. Put a cup of each into a saucepan and put over low heat, stirring until the sugar dissolves (no need to bring to simmer). You could stop there, but if you want to make it pretty, add 1/2 tsp of rose water, and stir to combine. The above will yield 12 oz. grenadine, which is enough for 24 of these drinks. Keep in the fridge.

Whiskey: This is the hard question. At the Ward Eight in Evanston, IL, just north of Chicago, they make their Ward Eights with a 100 proof rye whiskey like Rittenhouse, citing the juiciness of the cocktail as the need for higher proof. They’re not wrong—any softer and it risks over-sweetness, and Rittenhouse yields a stiff and snappy cocktail. Another choice is to use something that’s almost all rye, like Bulleit or Dickel ryes, which succumbs to the juiciness of the drink slightly but are mild and pleasant, like a warm bath.

Better, for me, is to deviate from the classic and use bourbon instead of rye. The orange in the recipe is practically begging for bourbon, and the grenadine ingratiates itself nicely. Our old friend Buffalo Trace made the best version of the lot.

Other Ingredients: Good as bourbon is, it still faces the tannin problem we talked about in our bit on Whiskey Sours. You need something else. Some people incorporate sherry, which is a good idea. Some early recipes had soda, which is less good. The obvious idea, and my personal favorite, is to incorporate an egg white, which does double duty of binding to the tannins in the whiskey and tamping down the sweetness of the final product. At the end of the day, if you’ve changed the whiskey and added an ingredient, is it still a Ward Eight? Perhaps not. But it is a great cocktail.

Add all ingredients to a cocktail shaker without ice, and “dry” shake for five seconds to whip the egg white. Add ice, shake hard for eight to 10 seconds, and strain into a cocktail or coupe glass. Garnish with an orange peel.