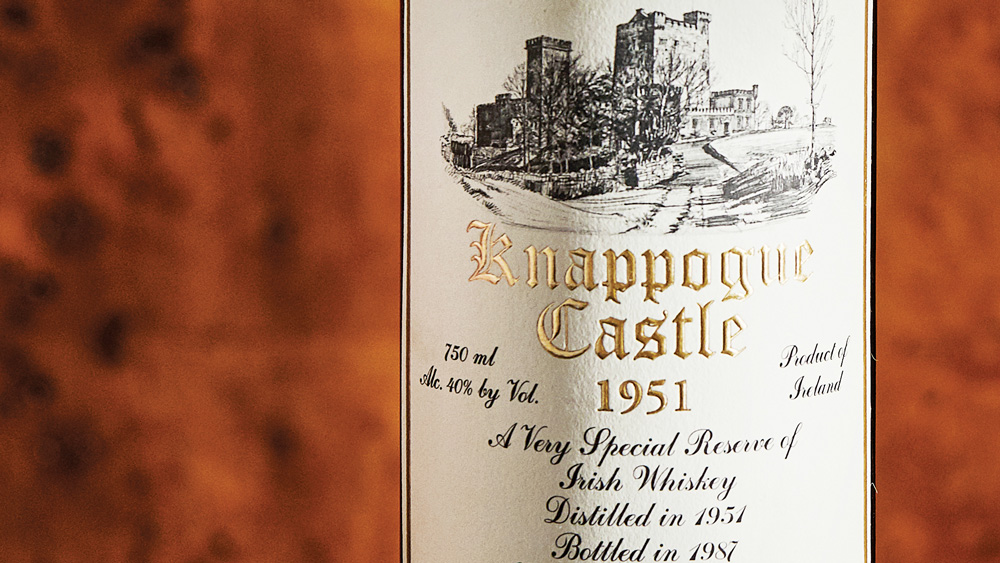 Knappogue Castle 1951
This Irish whiskey is one of the few to have become so rare as to achieve collectible status—and with good reason. Knappogue Castle 1951, unlike most Irish whiskeys, was blended with pure pot-still single malts. Distilled in 1951, the spirit was then aged for 36 years in oloroso sherry casks. The result was finally bottled in 1987 as an extremely limited edition named after an Irish fortress. The few remaining bottles of the 1951 vintage are judiciously released each year. As enduring as Knappogue Castle itself, this distinctive whiskey hugs the palate with firm flavors of licorice, caramel, and crusted bread, finishing with notes of thick, honeyed nectar ($2,000).—Richard Carleton Hacker

The Glenlivet Winchester Collection
Last October, the Glenlivet released the second edition of its extraordinary collection of 50-year-old single-malt whiskies named for its current master distiller, Alan Winchester. This exceedingly rare Speyside malt was crafted in 1966 to the specifications set by the brand’s founder, George Smith, in the early 19th century. The recipe yields a mix of orange and treacle on the palate with notes of cinnamon and licorice, ending in a long, smooth finish. The spirit was laid down in a single sherry cask in 1966, the year Ronald Reagan was elected governor of California. A half-century later, 100 handblown bottles were filled with this glorious measure of history, each topped with a quartz Cairngorm stone–finished gold stopper and housed in a cherrywood case designed by bespoke cabinetmaker John Galvin ($25,000).—Dan Dunn

Bowmore 1961 50 Year Old
In 1961, on what was undoubtedly a cold December’s day along the shores of Loch Indaal on Islay in the Scottish Inner Hebrides, some long-forgotten member of the Bowmore distillery team filled two ex-bourbon hogshead casks with whisky and stacked them inside one of the world’s oldest scotch maturation warehouses. A half-century and countless nips from the angels later, only 200 bottles worth of precious liquid remained. In December 2016, Bowmore released the fourth and final 50-bottle edition of that hallowed 50-year-old expression, one of the rarest single-malt scotches ever brought to market. Collector whiskies rarely get much more covetable than this one.

Historical significance and scarcity aside, the whisky itself is a thing of sublime complexity and balance. Most remarkable is how not old this expression tastes. While this Bowmore certainly will not be mistaken for one half its age, it is devoid of that nutty rancio quality usually found in any spirit that went into barrel prior to the Nixon administration. This 50-year-old opens with hints of papaya, pineapple, and black truffle that give way to an array of ripe fruit flavors and a gentle peaty smokiness. There are no discordant notes. The crescendo-like finish is evocative of warm pecan pie and caramel candy, with just a trace of oatmeal at the last.

The packaging, of course, is as extraordinary as a whisky of this caliber demands. The handblown vessel was created by noted glass-sculpting studio Glasstorm, with neck collars and cork tops by England’s Fattorini silversmiths. The bottle is housed in a Scottish elm-wood cabinet made by master carpenter Peter Toaig ($23,000).—D.D.

This bottling is, in fact, the oldest bourbon ever produced by the Van Winkles and the Buffalo Trace distillery. The spirit was distilled in the spring and fall of 1989 and then put into new, charred American white-oak barrels, which were stored on the lower levels of a metal-clad warehouse that had been built in 1935 at the old Van Winkle family distillery in Shively, Ky. In 2002, following a joint agreement between Buffalo Trace and Julian Van Winkle III, grandson of Julian P. “Pappy” Van Winkle Sr., the 11 barrels were moved to the Buffalo Trace Distillery, where they continued to age for another 12 years on the lower floors of a brick warehouse. The relatively cooler temperatures of this placement gently slowed the aging process and helped preserve the sweet, mellow notes of Van Winkle’s wheated bourbon recipe. In 2014, Buffalo Trace transferred this whiskey from its original barrels into stainless-steel tanks to halt further aging, as the bourbon had finally reached its peak of perfection.

“The nose is incredibly well balanced with an unprecedented air of sophistication,” says Drew Mayville, director of quality at Buffalo Trace. “There is strong vanilla, dried fruit, and caramel clues of sweetness, with a surprising lack of predominance of oak. The taste is incredible and explosive. Initially, its rich, buttery-soft, and creamy entry is innocent, with a complex mix of caramel, maple syrup, toffee, and dried fruit notes, and then it explodes with a spiciness and an enduring dry, oaky chocolate-and-leather finish.”

Extended evaporation over a quarter of a century left just enough of this precious bourbon to fill 710 silver-capped, individually numbered Glencairn crystal decanters. A separate crystal stopper is included for those special occasions when this bourbon will be poured. The handmade wooden case housing each decanter features a lid fashioned from the oak staves of the original barrels that held the spirit. Bottled at 100 proof, the whiskey comes with a certificate of authenticity signed by Julian Van Winkle III—final testimony to what may very well be the finest bourbon his family has ever produced ($1,800).—R.C.H.