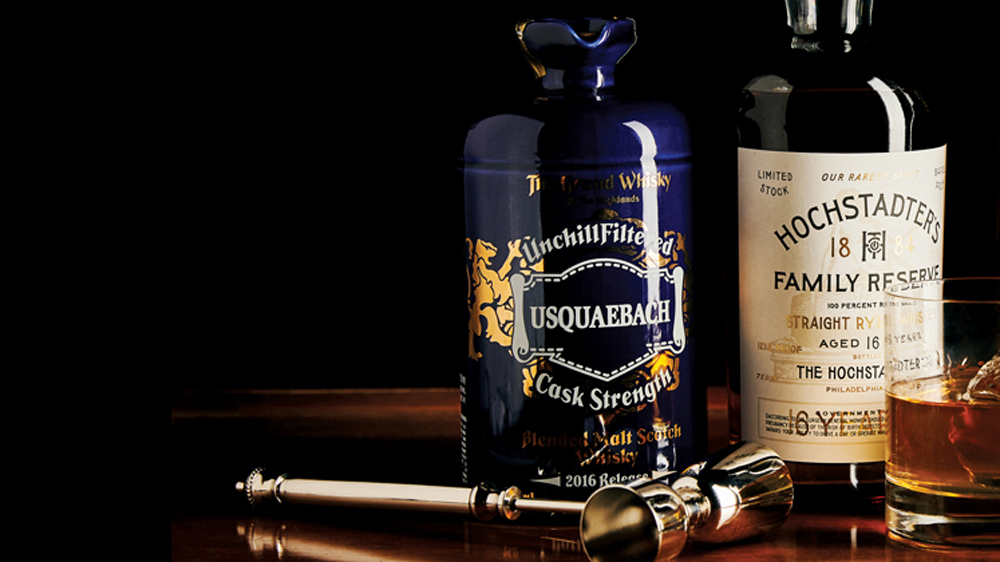 Usquaebach An Ard Ri Cask Strength
October saw the release of the first new blend in a quarter-century from the esteemed Scottish Highlands distillery Usquaebach. An Ard Ri (Gaelic for “the high king”) is made from a range of more than 20 well-known Highlands single malts, including Craigellachie, Glengoyne, and Auchroisk. The nose offers biscuits and leather. On the palate, it’s impeccably smooth for such a high-alcohol spirit (114 proof), with a powerful flavor profile punctuated with caramel, coffee grounds, and zesty citrus notes. An Ard Ri Cask Strength comes in an arresting gold-and-blue variation of Usquaebach’s signature flagon. A mere 2,000 bottles were made available to the public ($200).—Dan Dunn

Hochstadter’s Family Reserve 16 Year Straight Rye Whiskey
Rob Cooper was just 39 years old when he died in April 2016. Among spirits aficionados, he will be remembered for founding the Cooper Spirits Co., the brand behind the tremendously successful St-Germain elderflower liqueur. After selling the brand in 2012, Cooper turned his attention to rye whiskey, resurrecting the Hochstadter’s label. Shortly before his untimely death, he personally selected the barrels for the sensational Hochstadter’s Family Reserve 16 Year Straight Rye Whiskey, which was released in March. Made with 100 percent rye grain, which is unusual for most rye whiskeys, the distillate was aged 16 years in newly charred American oak casks. Add branch water or a big cube of ice to elicit its intense rye spiciness and lush toffee flavors. This spirit is as unforgettable as Cooper himself ($200).—D.D.

The Tyrconnell 16 Year Old Single Malt
Named after the long-shot winner of Ireland’s 1876 National Produce Stakes championship Thoroughbred horse race, the Tyrconnell was also once one of America’s most popular Irish whiskeys, until it, like other labels from the Emerald Isle, was felled by a one-two punch from Prohibition and the Irish Civil War of 1922–23. But thanks to the current boom in brown spirits and consumers’ rediscovery of Irish whiskey, the Tyrconnell 16 Year Old Single Malt has burst from the starting gate and is already heading down the home stretch. Unlike other whiskeys in the Tyrconnell lineup, this limited edition has been aged exclusively in ex-bourbon barrels and is one of the few Irish whiskeys to be double pot distilled, rather than triple distilled. The result is a rich, malty whiskey with creamy overtones, nuances of green apple and vanilla custard, and a dusting of almonds. A winning entry indeed ($100).—Richard Carleton Hacker

Glenmorangie Bacalta
Bill Lumsden, Glenmorangie’s head of distilling and whisky creation, continues to discover innovative ways to interpret this classic Speyside malt whisky by finishing it in barrel types that have rarely, if ever, been used. Reflecting his current fascination with sherry and Madeira—specifically Madeiras produced using the Canteiro process, in which the fortified wine is aged using the sun’s heat—Bacalta is the eighth release in the distillery’s annual Private Edition limited offerings. Essentially, it is Glenmorangie’s classic 10-year-old bourbon-barrel-aged whisky finished for two more years in ex-​Malmsey Madeira casks. New elements of caramelized citrus, almonds, and apricots linger with every sip, proving Lumsden has done it again ($100).—R.C.H.

Blade and Bow 22 Year Old Kentucky Straight Bourbon
Named after the two parts of a skeleton key, Blade and Bow is a tribute to the “five keys” of crafting bourbon (grain, yeast, fermentation, distillation, and aging) that were once immortalized by the old Stitzel-Weller distillery in Louisville, Ky. To be sure, this meaty bourbon contains some of the oldest remaining whiskeys distilled at Stitzel-Weller before it ceased production in 1992. In addition, it incorporates a few other ancient whiskeys sourced from neighboring facilities. The 22-​year-old was rereleased in select markets to coincide with the Kentucky Derby in May. Smooth, slightly smoky, with thick, palate-hugging notes of candied cherries and a subtle, caramelized vanilla-coated sweetness, this heavy-duty sipping whiskey is bottled at a surprisingly approachable 92 proof and meant to be savored neat or on the rocks ($200).—R.C.H.