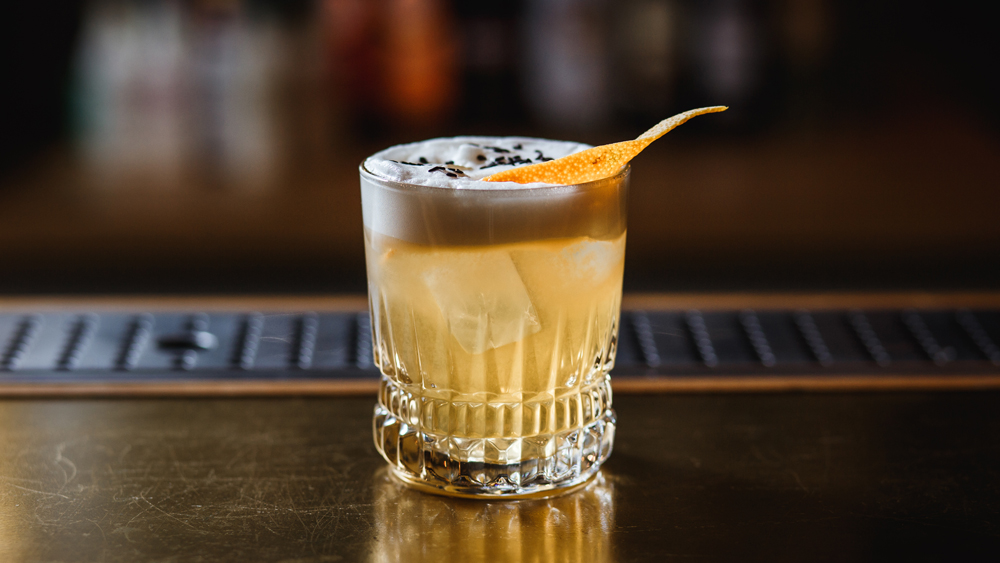 Is there a more agreeable drink than a well-made whiskey sour? One that appeals to a wider swath of drinkers? I’m not sure there is. It’s got whiskey, for starters, so it’s good for people who insist on that kind of thing, but when properly constructed it’s also incredibly mellow and almost entirely defanged—the first whiskey drink I’d make a self-proclaimed whiskey hater to change their mind. The citrus makes it refreshing enough for a warmer day, while the oaky brown spirit makes it welcome on a colder one. And the magic of the cocktail is that you can add circles onto that venn diagram, one for every type of drinker or circumstance, keep going until the paper is heavy with ink and looks like a spirograph, and Whiskey Sours will still be right in the middle. The main difference between people who like Whiskey Sours and people who dislike them is that the people who dislike them actually do probably like them, they just don’t know it yet.

While the term “Whiskey Sour” first shows up in print in 1870, it’s far too foundational to have really been invented anywhere. It’s like asking who invented lemonade. The “sour” cocktail is as simple as it gets, and it works like this: Alcohol, as you are no doubt already aware, is astringent. It burns. This is why people use chasers after taking shots, to distract themselves from the unpleasantness of alcohol’s fire. But in a cocktail, if you take something extremely sour (like citrus juice) and you balance it against something extremely sweet (like simple syrup), that tug-of-war between these two mammoth sensations is so intense on your tongue that it creates a level of misdirection that would impress David Blaine, because while you get the taste of the liquor, you don’t register the heat. This is the principle by which all sour cocktails work—it’s why Coca-cola is a better mixer than Iced Tea, it’s why you hate shooting tequila but love drinking Margaritas—and in this case, it is the best way to diffuse whiskey’s intensity.

Harness that power, and you can make this cocktail any way you want. Almost. The only real unacceptable way to make them is unfortunately still the most common one, which is to treat “whiskey sour” like a recipe instead of a cocktail name, and to simply combine whiskey and sour mix. Sweet and Sour Mix is the zombified version of the “sour” cocktail principle I talked about above, and even the most artisanal small-batch free-range organic version is at best pasteurized, oxidized and overly sweet. And at worst the very kind of incandescent, high-fructose corn-syrup, 0 percent juice bullshit that the whole modern cocktail movement was created to reject. There aren’t a lot of hard and fast rules in mixology, but one of the core ones is that if something glows in the dark, you probably shouldn’t drink it.

Beyond that, there are at least three main delicious variations of the cocktail, and they’re all equally correct. As the old saying goes: When life gives you lemons, make Whiskey Sours.

The Cocktail Bar Standard a.k.a. Using an Egg White

Add all ingredients to a shaker tin. “Dry” shake ingredients without ice for five seconds to whip the egg. Add ice, seal tins and shake hard for 10 to 12 seconds. Strain into coupe or martini glass—it’ll come out white at first, and the color will emerge over the course of a minute under a paper-smooth head of foam. Express a lemon peel over the top of the foam for aroma and discard and decorate the foam with a few drops or dashes of Angostura Bitters.

The smoothest and most elegant way to make a Whiskey Sour is to make it with egg white. Now, if you were disinclined to try it before, I doubt I just sweetened the pot with the promise of a raw egg, but hear me out: Just like when you eat them, egg whites don’t taste like anything really, but serve here to give the whole cocktail a velvety texture, a pretty white head, and most importantly, to bind to the tannins in the spirit, smoothing out the rougher edges of the whiskey.

It’s difficult to overstate how effective an egg white is in transforming whiskey’s astringency into something silky smooth. Usually, whiskey’s oak tannins behave in cocktails like a manspreader in a middle seat in coach, all elbows and knees, crowding out the other flavors… but the egg whites completely neutralize it (in this simile, it would be what, Xanax?) This is the version you’ll get in most cocktail bars, and the best choice when shaking with bourbon or rye, which have the most aggressive tannins. Honestly, the egg white’s almost too effective—I’ll reach for a bourbon here at least 45 percent alcohol to make sure it’s got the weight to not disappear. Lots of bourbons work great here (and ryes, for that matter) but if I had to pick one, I’d go with Elijah Craig, which is right in the sweet spot of age, proof, mashbill and price.

A necessary note: egg whites are largely safe, but if you’re nervous or immunocompromised, feel free to use in-shell pasteurized eggs. If you’re vegan, you can use aquafaba, which functions more or less identically. If all you have is a carton of pre-cracked, pre-separated egg whites, perhaps consider making it as below.

Whiskey Sour Classic a.k.a. Without Getting Eggs Involved

Add all ingredients to a shaker tin. Add ice, seal tins and shake hard for 6 to 10 seconds. Strain over fresh ice in a rocks glass, and garnish with an orange slice, or cherry, or both.

If you don’t want to get eggs involved, you don’t have to—the cocktail still benefits enormously from simply using fresh ingredients and measuring them so they’re balanced against each other.

The only thing I’d note is that there’s nothing here to bind to the tannins, so choose a whiskey that doesn’t have that many. Both Canadian and Irish whiskies are perfect candidates for this—Crown Royal, Seagram’s VO, Jameson or Tullamore D.E.W. or the like. Aim for 40 percent and avoid too much age—basically the budget end of the spectrum is ideal.

Federal Buffalo Stamp a.k.a. Mixing Up the Sweetness

Muddle ginger in the bottom of a shaker tin. Add liquid ingredients, add ice, seal tins and shake hard for 6 to 10 seconds. Strain over fresh ice in a rocks glass, and garnish with a lemon wheel.

Using a different kind of sweetness is a fun and interesting way to mix it up a little and circumvent the need for an egg white. If you used honey syrup instead of simple syrup, it would be called a Gold Rush and has a story all its own, but one of my favorite things to do is to recruit the depth of fresh maple syrup and the spice of ginger, which are a wonderful foil to the bourbon and don’t bind to the tannins so much as provide such an interesting side show that your palate doesn’t really mind.

For bourbon here, I’d say 45 percent ABV is a maximum. Buffalo Trace, as always, is a wonderful choice, but this is great with the less expensive end as well, like Evan Williams Black Label or Jim Beam or even a Tennessee whiskey like Jack Daniels.