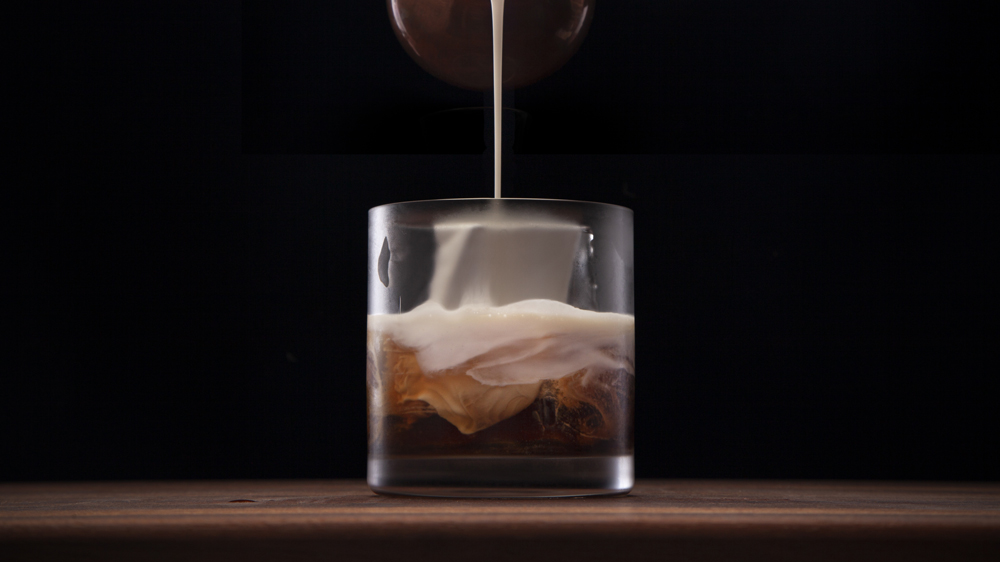 If that sentence makes any sense to you at all, it’s likely because you know the White Russian as the favorite cocktail of one Jeffrey “The Dude” Lebowski, the protagonist of the Coen Brothers’ excellent cult comedy The Big Lebowski. “The Dude,” as it’s said in the film, “abides.” In context, it’s used to mean that he takes it easy, goes with the flow and the same could be said of the cocktail. The White Russian has been pushed around in the culture for the last 70 or so years, abused and enjoyed and forgotten and celebrated, and through all of it, like The Dude himself, it persists with a zen-like equanimity. It abides.

It was invented somewhere around 1949 we think, just as something to make with vodka, the spirit at the time still a foreign curiosity. The original was the Black Russian, just vodka and coffee liqueur, and before long there was the White Russian, for which someone had the fairly obvious idea of adding milk. There is, amusingly, nothing Russian about the drink whatsoever, the cocktail’s first joke—vodka obviously has an Eastern Bloc vibe to it, but America’s most popular vodka, Smirnoff, was distilled in Connecticut and had been, at that point, for close to a decade. No matter—the mixture was used to sell vodka and sell coffee liqueur and besides, ordering a “White Russian” in the middle of the Cold War was some delicious and harmlessly subversive fun. Calling it the White Person From Connecticut wouldn’t have been nearly as fun.

It enjoyed popularity in the ’60s and ’70s, but by the ’80s was passé—too sweet, too creamy and too basic. Nightclubs weren’t about to start stocking cartons of milk. It seemed like the White Russian was destined to be become one of those forgotten cocktails that is only ever consumed by someone’s great aunt on special occasions and indeed had settled into that inglorious life for about 15 years. It would take Jeff Bridges’s Lebowski shuffling around in a robe and jelly sandals, making White Russians from a carton of milk purchased with a post-dated $0.69 check, for the cocktail to achieve a new life.

And what a new life it has. Every bowling alley in the known universe now features White Russians, or would if they knew what was good for them. There are Lebowski themed bars all around the world, from Dresden to Glasgow to Reykjavik, all complete with White Russian-themed menus. There are Big Lebowski watching parties, held either among friends or at bars, and they always serve the same thing. And why not? The White Russian doesn’t ask for much. It’s coffee and cream made alcoholic, essentially a vodka Frappuccino, sweet and creamy and so simple it could be made by a gorilla. No matter how mangled the measurements become, it’ll still be pretty good. Some recipes call for semi-whipping the cream and layering it on top and adorning the top with some grated nutmeg. With respect, I feel like those recipes miss the point. The White Russian isn’t to be taken seriously. It’s a joke. It just happens to be a delicious one.

I like to think that’s why it was chosen as the Dude’s favorite drink, and why it’s such a perfect choice. Before the fame conferred by the film itself, the cocktail was just one more good joke in a story full of jokes. This guy drinks White Russians? Still—the cocktail isn’t about status or glassware or elegance. It’s not masculine or feminine. It isn’t complex and it doesn’t demand special tools or preparation. It’s good for bowlers, nihilists, urban achievers or anyone who feels like something creamy and delicious. It’s always there for you, whenever you feel like throwing one together. It abides.

Add all ingredients to a rocks glass with ice, Stir briefly to incorporate, or otherwise dump it, ice and all, into another container and then dump it back, to mix. Do not shake. Do not garnish. Drink and enjoy.

Coffee Liqueur: Kahlua is the classic and works surprisingly well, given its relatively mild coffee flavor. Tia Maria is acceptable, but less good. The 3rd-wave hipster-y ones like Mr. Black and St. George NOLA make absolutely exceptional Espresso Martinis but are too much for this drink (a Mr. Black and heavy cream White Russian is bitter and fairly joyless). My absolute favorite coffee liqueur to use here is Borghetti Espresso Liqueur, from Milan. It’s a little specialized—you likely won’t find it in the supermarket—but it has the body and sweetness of Kahlua but a deeper flavor. It’s remarkable. If you love White Russians, or are planning a night around them, it’s worth the effort to seek it out.

Vodka: While the particular brand of vodka for a cocktail usually doesn’t matter much, that is extravagantly true for the White Russian. Brand literally couldn’t matter less. Use whatever.

You can fuss about with other spirits if you have a mind to—aged rum comes to mind—but once you start messing with it, the simple magic of White Russians starts evaporating and you find yourself tweaking and topping more than perhaps you meant to. Basically, anything but vodka makes it a different cocktail with different rules. Me, I’d just use vodka.

Salt: optional, but when I’m making cocktails that incorporate protein or fat, I like to add a small pinch of salt, which enhances the flavor and also serves to help mitigate some of the coffee and alcohol bitterness.