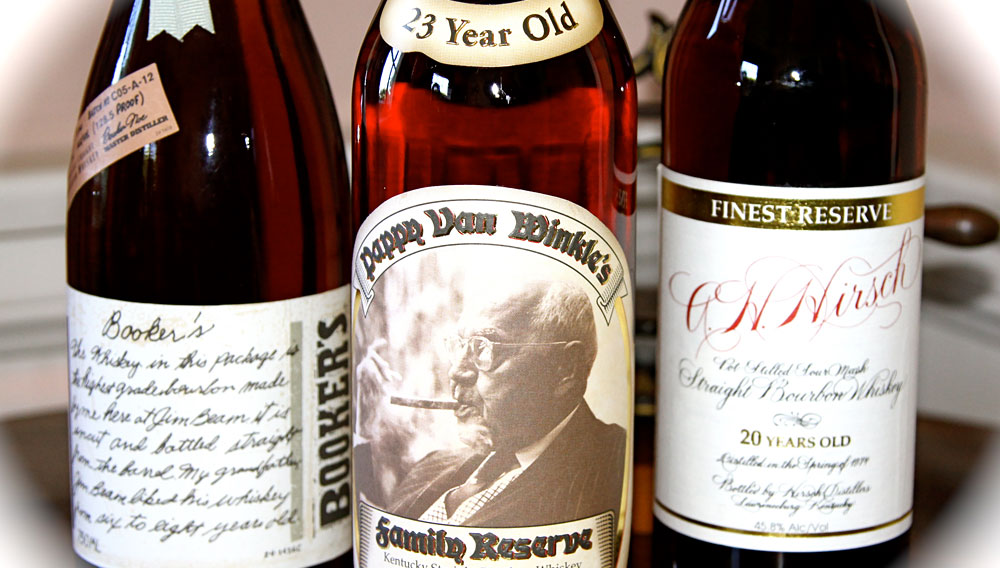 A little more than two decades ago, there was no such thing as small-batch bourbon. And yet, it existed all the same. The problem was that no one had yet coined a term that adequately described all those incredibly rich limited-production bourbons that were being made by some of America’s best distillers.

That marketing dilemma was solved by Jim Beam Brands (now Beam Inc.) in 1992, when the master distiller, the late Booker Noe, coined the term “small batch” to categorize a series of four boutique bourbons the Jim Beam company was about to launch: 7-year-old Baker’s ($45), 8-year-old Basil Hayden’s ($36), 9-year -old Knob Creek ($30), and Booker’s ($50), which was aged six to eight years and bottled between 121 and 127 proof, depending on when Noe felt the bourbon had reached its peak. Moreover, this was the only bourbon that was bottled straight from the barrel, uncut and unfiltered.

In truth, the meaty and muscular Booker’s was the master distiller’s personal bourbon and the whiskey that started it all, for Noe always kept a number of special barrels aging in the “sweet spot” in the middle of the Beam warehouses, where there was a minimum amount of fluctuation in temperature and humidity. Every Christmas he would bottle some of this whiskey and hand it out to family, friends, and salespeople, one of whom finally enthused, “We ought to be selling this!” And thus the small-batch bourbon category was born.

Today numerous other small-batch bourbons have joined the ranks, even though many of them were already known to connoisseurs and collectors. For example, one of the rarest is the ultra-scarce A.H. Hirsch 20 Year Old ($2,600), one of the last of the Pennsylvania pot-distilled bourbons. It was distilled at the request of Adolph Hirsch in 1974 at the old Pennco Distillery in Schaefferstown, Penn., after which Hirsch apparently forgot about it. The bourbon was left to age, which it did with spectacular results. After the distillery closed, the bourbon was sold and most was bottled as a 16-year-old. But out of curiosity to see how well this already remarkable whiskey would continue to age, the new owners allowed a few barrels to remain in the warehouse. At the end of 20 years, it was decided that the bourbon had reached perfection; but two decades of evaporation had left just enough to fill 6,000 bottles. That was in 1995. Today, the few elusive bottles that remain are highly coveted. In fact, in Southern California, the bar at the Hotel Bel Air keeps its one bottle, which must be specifically requested by customers, under lock and key. A 2-ounce shot sells for $300.

Slightly more obtainable—but not by much, because each release almost immediately sells out—is Pappy Van Winkle’s 23 Year Old Family Reserve ($240), the only 23-year-old bourbon on the market today. This is the same wheated whiskey found in Pappy Van Winkle’s 20 Year Old, but with three more years of barrel aging. At 95.6 proof, it has a thick bouquet of caramel and vanilla, with a hint of roses and lemon, and a rich, subtly sweet, mouth-filling flavor. A combination of both pot-distilled and column-distilled whiskies, it is hand-bottled and each label individually hand-numbered. The number of bottles each year are very few, and although many are hoarded by collectors, that does not do justice to this elegant sipping whiskey, which is best enjoyed neat, in a crystal snifter. In fact, Julian Van Winkle III sternly admonishes fans not to add water, as it will dilute the complex flavors of this remarkable whiskey.