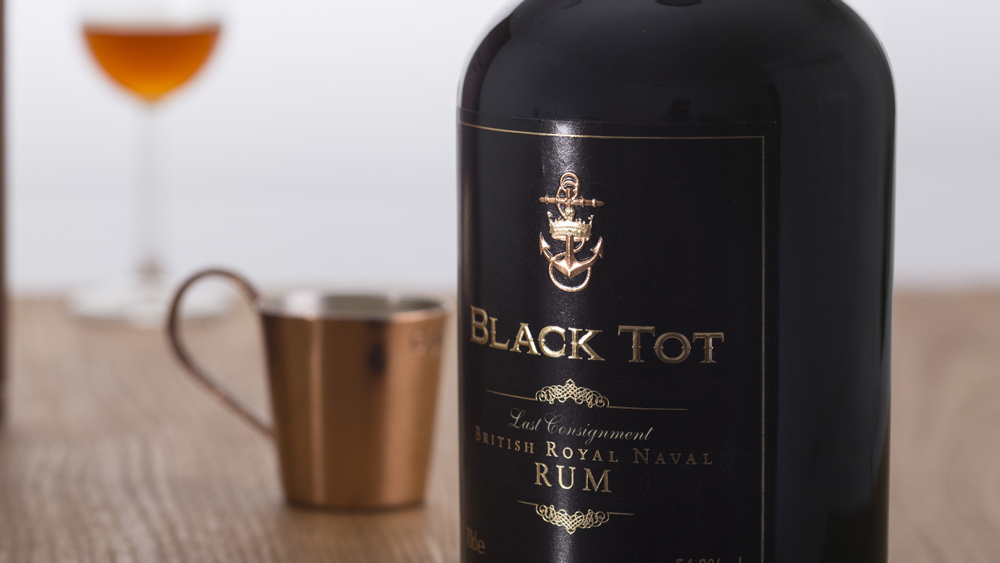 Starting in the mid 1700s, sailors in the British Navy were given a daily ration of rum—a “tot,” as it became known. The practice continued for more than two centuries, during which time, coincidentally or not, the Royal Navy became the most powerful armada in the world. When the last daily tots were issued on July 31, 1970, there was widespread mourning among those in uniform, and a lot of naval rum left over, gathering dust in government warehouses. Today, authentic samples of original Royal Navy rum are prized, not just because of their historical significance, but because it’s delicious, and made in a style that’s all but impossible to replicate today.

The Royal Navy had begun issuing its seamen rum on an ad hoc basis, along with other spirits such as brandy and arrack, as far back to 1655. It started out of necessity, according to rum historian Matt Pietrek, author of the Cocktail Wonk blog. “When the British Navy first started commanding the oceans in the late 1500s, if you think about the containers they had at the time, they were just wooden casks, where any liquid would be stored,” Pietrek said. “Water by itself, in wooden casks in a hot tropical climate, was going to go bad pretty quickly. Even beer would go bad because the alcohol content wasn’t high enough. It was really only a distilled spirit, that the alcohol basically prevented it from spoiling.” The other reason for the tot was to keep the sailors’ morale up in brutal conditions. “How do we keep sailors from deserting?” Pietrek asked rhetorically. “Getting them drunk every night. They’ll come back.”

In the 18th century, each sailor was allotted half an Imperial pint of rum a day, which translates to about ten ounces. Keeping in mind that this was barrel strength, overproof rum (about 150 proof, according to Pietrek), it’s hard to imagine how the Royal Navy ever left the docks, to say nothing of ruling the high seas. Cooler heads eventually prevailed, and the ration was reduced in 1850 to its final “tot” of 1/8 of an Imperial pint (about 2.5 ounces). By 1866, the ABV had also been lowered to “4.5 degrees below proof,” which translates today to 54.5 percent ABV—also known as navy strength. Still not too shabby, but it doubtlessly made the actual work of sailing a ship a little easier.

Millions of gallons of rum were required to supply the entire navy, so it was sourced from multiple places. Not much evidence survives about the rum’s provenance before the twentieth century, but by the 1930s the lion’s share came from British Guyana and Trinidad, both British colonies at the time, with smaller amounts coming from Barbados and Australia. When supplies ran low and necessity required it, they’d even source rums from Cuba and Martinique. Surprisingly, rum from Jamaica, which was a part of the British empire until 1962, was generally not used, owing to its powerful, funky flavor.

The formalized Royal Navy blend dates back to the early 1800s, and it marked the very first time that rums from different countries were blended together. The blending took place in several victualing (pronounced “vittling”) yards in England, where naval supplies and provisions were prepared and stored before transporting to the ships. The rum was poured into large open vats, each holding several thousand gallons. “They would dump the rum into these vats, in whatever the preferred recipe was—and that changed over time,” Pietrek says. “All the vats were apparently connected, so you could take some of the rum from this vat and send it to that vat.” The rum was circulated up to two years. Water was added during the process, and an agitator would blend the rum and the water so the strength of the final product would be uniform. The vats were never completely emptied—they were always topped off with new rum—so by 1970, a solera of sorts had been created, with decades-old rum in the blend. Caramel was added for color, as well as a touch of flavor, before the contents were shipped off to sea. Larger ships received their rations in casks, while smaller ships and submarines got stone flagons wrapped in wicker.

There had been debate in the Royal Navy about ending the daily tot for roughly a century when the decision was finally made to terminate it in late 1969, with a firm end date of July 31, 1970. “Essentially,” said Pietrek, “the officers of the navy and the admiralty itself were not big fans of drunk sailors. And as the navy got more modernized and more complex, you couldn’t have a drunk sailor manning the radar or critical life systems.” The day the final tots were issued became known as Black Tot Day. “The name comes from this idea of, it was a funeral for the rum,” says Black Tot brand ambassador Mitch Wilson. “It was like losing your favorite comrade on the ship. The sailors wore black armbands, [and] some of the naval schools had fake funerals for the rum.”

The leftover rum was put into flagons and stored in Navy warehouses, to be brought out occasionally for royal or state functions. Eventually, much of it was sold off to private collectors to make room in the warehouses. That’s where Sukhinder Singh, founder of spirits retailer The Whisky Exchange, comes in. After being offered several unopened flagons from a retired sailor in the late ‘00s, he managed to track down enough to warrant bottling and releasing it. But first he had to make sure it was more than just a historical curiosity. Mitch Wilson remembers, “We got the flagons together, we decided to taste them, and the concern was, would they taste any good?  We poured them out, and the first taste was like, ‘Wow. These aren’t just good, these are incredible.’ This is a rum that just doesn’t exist in the world today.”

First released in 2010, Black Tot Last Consignment, as it’s known, is still available through The Whisky Exchange and a handful of other select retailers. While it’s not as elegant as top-shelf aged sipping rums, it’s powerful and complex, showcasing rich dark chocolate, caramel and molasses notes along with the meatiness of the Guyanese rums, which were the backbone of the blend, and hints of vegetal funk that may or may not have come from Jamaican pot still rums, which were employed scarcely if at all. It wasn’t intended for connoisseurs, but whether you’re gulping it below deck or sipping it out of a Glencairn glass, it’s a delicious rum.

Not quite the real deal, but delicious nonetheless.  Photo: courtesy Pusser's Rum

If you’re looking for a more affordable approximation of the Royal Navy rum, you’ve got a couple of options. Charles Tobias, a former American sailor, convinced the British admiralty to give him their blending recipe, which he recreated as Pusser’s Rum. It’s not a faithful recreation—as Matt Pietrek says, “Pusser’s blends to the flavor profile of the navy blend, if not the actual recipe”—but it gives a good idea of what the real thing tastes like, at a price that’s several orders of magnitude cheaper. Pusser’s Gunpowder Proof expression is bottled at the same 54.5 percent ABV as the naval rum, while the flagship Pusser’s Blue Label comes in at a milder 42 percent.

Black Tot has also released its own bespoke blend, Black Tot Finest Caribbean Rum. It deliberately avoids hewing to the recipe or flavor profile of Last Consignment. Brand ambassador Mitch Wilson says, “We couldn’t recreate that blend if we tried. So rather than try to do an imitation, we instead worked on… let’s create something a little different, a little new, and create something everyone’s going to enjoy.” The blend of Guyanese and Barbados rums, with a hint of Jamaican pot still, bottled at 46.2 percent ABV, is indeed a most enjoyable blend, lighter than the Royal Navy blend but still flavorful and complex.

When you get right down to it, though, there’s no wrong way to toast the legacy of the daily tot and the countless sailors, officers and admirals who partook over the centuries. The rum of your choice and a hearty “God Save The Queen” will suffice.