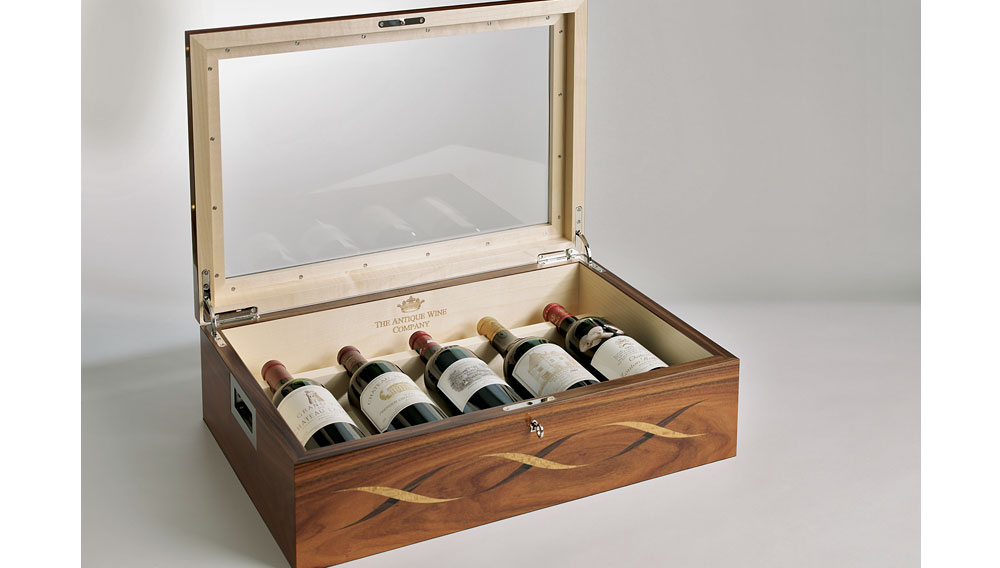 Four years ago, the Antique Wine Co. (www.antique-wine.com) of London unveiled the first installment in its Grand Château Series, a rare release of 18 bottles of the best vintages produced by Château Margaux. Looking to create a noteworthy case that could store and display those bottles, the company turned to prominent British woodworker David Linley. He and his team crafted a cabinet from sycamore, burr ash, and Bombay rosewood, highlighted by an intricate model of the French winemaker’s château. Nine châteaus eventually were represented in the series, and each cabinet cost $300,000.

The two luxury purveyors recently partnered again, this time to create a smaller, more discreet collector’s item. A display case embellished with Linley’s helix design—intertwined strands of Santos rosewood, Indian rosewood, ebony, and satinwood—is filled with five 100-point bottles of wine, each from a first-growth producer in Bordeaux. If a collector seeks examples that are ready to open and enjoy now, Stephen Williams, founder of the Antique Wine Co., might fill the box with a bottle each of 1982 Château Latour, 1986 Château Mouton Rothschild, 2000 Château Margaux, 1989 Château Haut-Brion, and 2003 Château Lafite Rothschild. Furthermore, this collector’s item, which costs £12,800 (about $20,000) and will be limited to 50 examples, can be customized to each customer’s specifications and desired time frame for uncorking. “We’ll tailor each vintage to one that’s ready to drink now or a vintage that they can lay down for the next 40 years,” Williams says.

The case itself is made from Santos rosewood and is accented with inlays of ripple sycamore and white sycamore. Inside, the five bottles rest in a rack made of white sycamore and cream-colored suede. Each case requires more than 50 hours of work by hand, but as the Linley team stresses, the wine is as beautiful as the box. For that reason, the case has a reinforced glass top, which allows the collector to display the bottles without disturbing the contents aging inside them. Each case also is equipped with a lock and key.

Sought-after vintages like the first growths stored in this limited-edition case can be found elsewhere, but not all bottles available on the open market or through auction are stored properly. In addition to selling and acquiring rare vintages, the Antique Wine Co. offers a storage service, which can prove especially useful when special bottles (like the ones included in this collector’s case) are purchased for intended consumption decades from now. “We offer a bespoke service, and that pertains to if we’re building a 10,000-bottle wine cellar or choosing a very special bottle of wine for an important occasion or a gift,” Williams says.

Depending on the customer, this Linley helix collector’s case could be both.