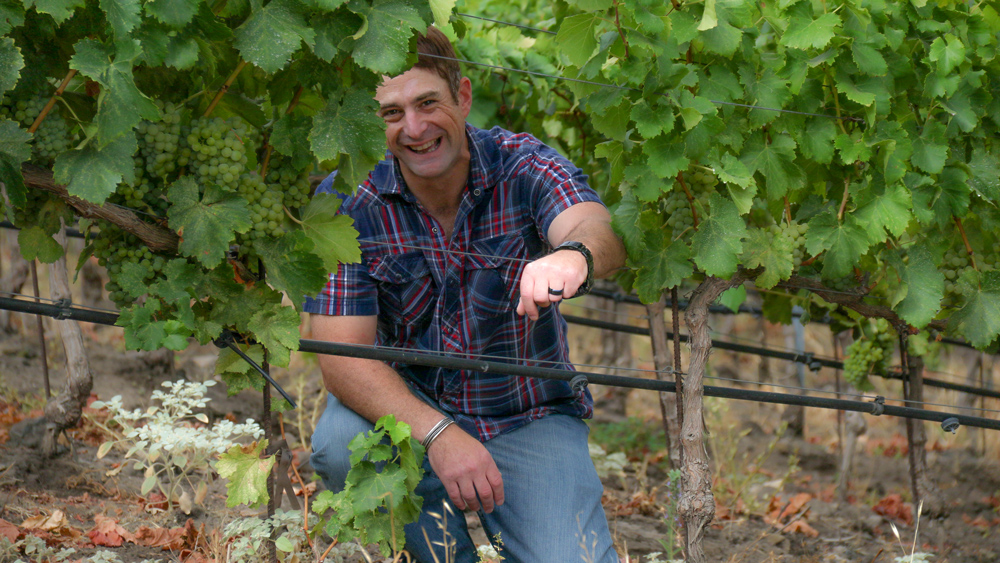 After two decades working as a sommelier at renowned culinary institutions such as Le Cirque and BIN 8945 Wine Bar & Bistro, David Haskell decided to take what many would consider a huge career risk—become a winemaker. The way Haskell saw it, though, “The most gratifying thing to do when you’re in love with something is to actually make it.”

So in 2013, he enrolled in the enology and viticulture graduate program at Fresno State. Two years later, he left graduate school to become a full-time winemaker—and he’s never looked back.

Before he even officially launched the Santa Ynez Valley–based Boscoe Wine Co. in 2015, Haskell’s wines were already on the lists of some of California’s best restaurants. Today, his Lizette (Grenache Blanc) and La Fai (Syrah cofermented with Viognier) are available at every three-Michelin-starred restaurant in the state.

Some of the most exclusive eateries in the U.S. carry your wine. To what do you attribute this remarkable, almost immediate success?

The French Laundry gave us an amazing opportunity as a no-name winemaker to walk in and taste them. That was huge for us and really put us on the map early on. It was the first restaurant I brought Lizette to straight out of the tank while it was still in fermentation. The head sommelier, Erik Johnson, loved the wine and said he’d put it on their list when it was ready to be bottled.

From there, we were able to place it at a lot of other fine restaurants, each time getting great feedback from sommeliers, many of whom said that it was different from anything they’d ever had before.

Legendary chef Michel Richard was a close family friend. How has he influenced your career?

Michel Richard mentored my mother in pastry, so he’s been a fixture in the life of my family. Without him, I would never have gotten into the restaurant business and probably wouldn’t be making wine either. I owe him my career.

When I was 16, I hated getting dressed up and going out to dinner with my parents. I didn’t get it. Michel saw this and put a burger with truffles and foie gras in front of me, along with mushroom soup with truffles. I loved it! Through our friendship, he gave me a sense of what hospitality meant.

Then, later, when I was an aimless 19-year-old, he was there again with just the push I needed. Michel asked, “What do you love to do?” I responded that I loved people, food, and wine. And the potential for a career that was right in front of me came into focus.

It’s simple—I’m about reacting rather than controlling. I use science to inform decisions that are guided by my palate while staying true to the grapes themselves.

From where are you sourcing your fruit?

From Ballard Canyon in the Santa Ynez Valley. We source all of our fruit from this AVA, working exclusively with Kimsey and Rancho Boa Vista vineyards. This valley has a special place in my heart. I’ve known that I wanted to spend the rest of my life here since my family’s first trip to the region in 1979.

I can’t do that! I love all of the restaurants that we work with, so if it were only one meal, it’d have to be a progressive tasting with the sommeliers pairing each dish to their choice of wine. An amuse-bouche at Single Thread, then onto French Laundry for a first course of oysters and pearls, followed with a second dish in San Francisco at Benu and then Quince. And since this is my fantasy, I’d have a helicopter take us back to Southern California for a fish course at Providence and a steak at CUT. We’d end the night with dessert at my parents’ home in Brentwood, eating on their deck with my wife, Connie, maybe enjoying a persimmon pudding that my mom does paired with 2016 Lizette. That would be the perfect end to the day.

Besides your own, what are some stellar wines on your radar at the moment?

I recently tasted a Cobb Riesling from Anderson Valley in Mendocino that was brilliant. It felt at home in between Mosel and Alsace—two European regions that specialize in Riesling—but the mid-palate texture was distinctive and really cool. It also had amazing back-palate of acid and fruit.

Steven McCall, a friend I went to school with at Fresno State, is also coming into his own as a winemaker. He’s got a Cabernet Sauvignon that I tried out of the barrel under his new label, Sua Sponte Cellars, that I think is going to be terrific in the future.