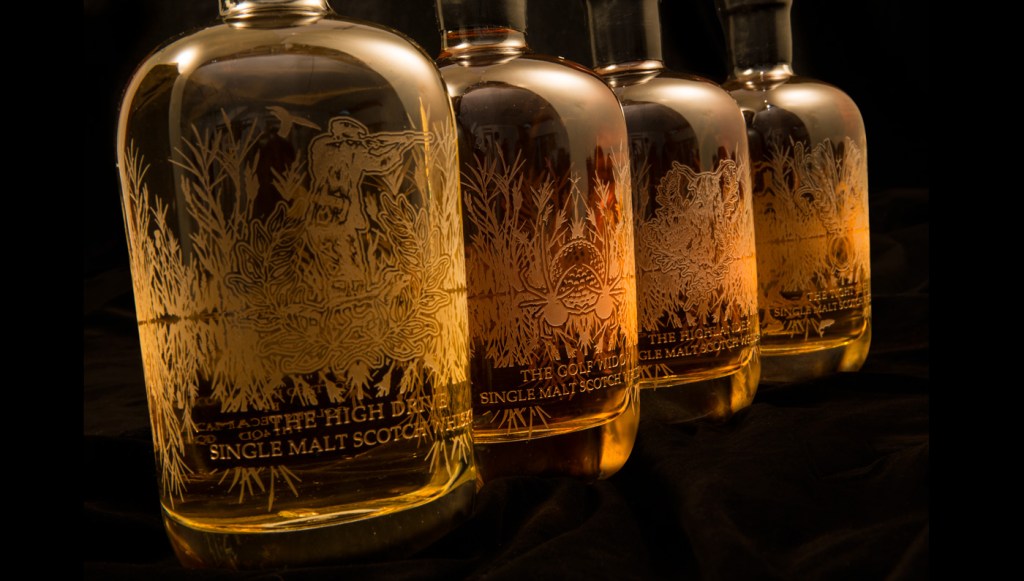 It’s impossible to encompass everything that makes Scotland great in a single bottle of Scotch whisky. But how about four bottles? That’s the thinking behind the launch from Golden Decanters, a new two-woman operation in London that curates vintage casks from some of the finest distilleries in Scotland.

Ann Medlock worked in real estate in San Francisco and New York for many years before returning to her native Scotland, while family friend Julia Hall Mackenzie-Gillanders worked in wine, acquiring high-end bottles for investors and collectors. They both had clients who wanted distillery tours of Scotland, which Ann would arrange, getting to know distilleries and the people who ran them in the process. After they helped a client buy a cask from an Islay distillery, they got the idea to source and bottle their own collections.

They scoured the country region by region, searching out the perfect whiskies. Their primary concern was flavor, not age. Medlock says, “Eighty-seven casks that we tasted, we declined. They might be very old, but they weren’t great. And it was difficult because people tend to reach for the oldest.”

The duo came up with a quartet of cask-strength whiskies that hit the sweet spot where age and beauty intersect. Each of the four major distilling regions of Scotland is represented. From the Highlands comes a 19-year-old Ben Nevis, a lively blend of wood, spice, and fruit. Representing the Lowlands is a 22-year-old Auchentoshan, a deep, rich, and unusually full-bodied expression of a dram that’s normally on the light side. Islay is embodied by a 26-year-old Bowmore, a deceptively sweet single malt that reveals a dry, elegant smokiness midpalate. And Speyside’s offering is a 34-year-old Glenlivet that concentrates the brand’s delicate sweetness minus any overly woody notes—a surprise considering its age.

Each of the bespoke bottles is delicately etched by Glencairn Crystal with a scene of Scotland’s finest pursuits, apart from whisky—golf, hunting, fishing, and Highland cattle—and the design is replicated on the handcrafted American oak boxes in which the bottles are housed. Golden Decanters created 180 numbered sets, of which more than 40 have already been sold since the program’s launch in October. The four whiskies are sold only together, for about $9,161. Golden Decanters is already planning a second release, with more to come, including a possible U.S. exclusive.

The company also offers distillery tours to its customers who make their way to Scotland. For those who desire a more immersive experience, there’s also a two-week enthusiast’s traipse through Scotland’s castles, fine restaurants, and distilleries, meticulously organized by Medlock and Mackenzie-Gillanders. No need to buy the Golden Decanters whiskies, as a set is included in the excursion package, the price of which is available on request. (goldendecanters.com)