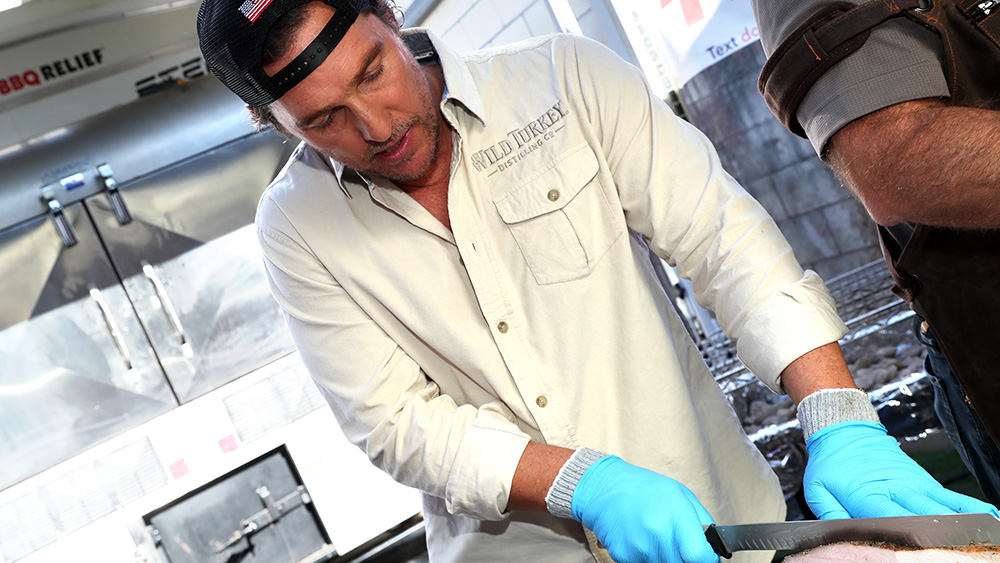 On November 4, Matthew McConaughey turned 50, and decided to commemorate the occasion with his first-ever post on Instagram, a social media platform that’s been around for nearly a decade. Now, if you’re wondering why the Academy Award-winning actor took so long to become Insta-official, well, you probably haven’t been following McConaughey all that closely. This is a man who clearly aims to take his time; a man who has turned deliberation into performance art (see: his TV spots for the Lincoln Motor Company).

A few days before his 50th, we caught up with McConaughey in Los Angeles at a day of service sponsored by Wild Turkey, the iconic whiskey brand for which he has served as creative director since 2016. Together with volunteers from Operation BBQ Relief, McConaughey helped deliver meals to first responders battling fires in the Los Angeles area, as well as to a local homeless shelter.

What inspired you to team up with Wild Turkey?

Their authenticity; the fact that they’ve never changed. Even when bourbon was not a hot spirit—when white spirits were all the rage—they stayed the course. It has remained real bourbon from day one. I came on board to help reintroduce bourbon drinkers to Wild Turkey and also to introduce a new generation who might not know the brand. And their values align with mine. The kind of person I strive to be is very similar to the type of people at Wild Turkey. So I said, I can get behind you, you can get behind me—there’s a symbiosis there, let’s work this out. And I was on board.

When you reference the people at Wild Turkey, you’re talking about folks like master distiller Eddie Russell and his father, Jimmy, who are both industry legends.

Absolutely. Jimmy Russell is the Buddha of bourbon. Sixty-five years he’s been doing it. I asked him one day at the distillery, how long are you going to keep doing this? He said, “I’m going to keep walking in until I can’t walk out.”

In 2018, you collaborated with Eddie Russell to develop Longbranch, a bourbon refined with Texas Mesquite and oak charcoals. Is it true you asked Eddie if he could slip some sugar in there? You know that’s against the rules, right?

(Laughs) I said to Eddie, can you just throw a few stalks of sugarcane in there, and he said “Hell no!” But what he did do, off of that comment, was switch from using 6-year-old bourbon to 8-year-old bourbon. And those two extra years of aging give it that little extra touch of sweetness that I was looking for.

Eddie said it took 88 different recipes before you finally found the one that became Longbranch. How did you finally settle on the one?

I happened to be in a really great place. I was celebrating my birthday on the river in Texas where I learned to swim. We were around a campfire, my wife and I and our kids. They were toasting marshmallows and stuff. And I saved those last four samples—numbers 85, 86, 87 and 88—to pull out that night. It was about 11:30 or so at night, and I got to number 88, tried it and thought, ooh, that’s it. But I held my tongue, didn’t tell my wife. I gave her the samples—she’d been trying them all along—and when she tasted number 88, she said, “that’s it!” And that’s the moment we settled on it.

How do you prefer to drink bourbon?

It depends on the time of the day. The first one, I’ll usually double rock it. But as we move into the night, I like it neat.