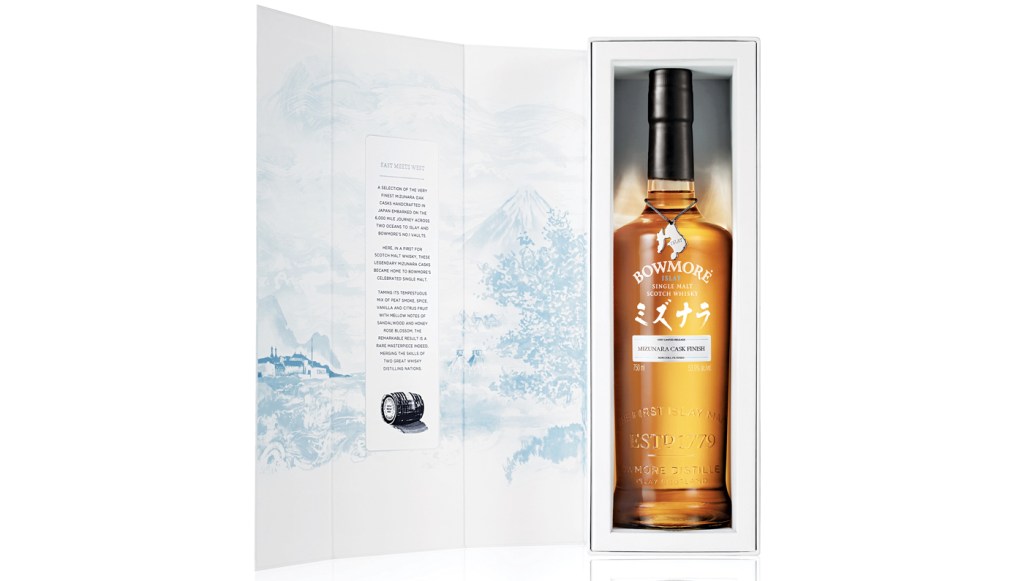 Iain McCallum vividly remembers the day when a shipment of rare mizunara oak casks arrived at the Bowmore distillery from Suntory in Tokyo. At the time, McCallum was the leader of Bowmore’s blending team (he now serves as a master spirits ambassador for Beam Suntory, Bowmore’s parent company), and even though he had led a number of experimental projects—including the distillery’s work with virgin American oak—he recognized the significance of marrying single-malt Islay scotch with this prized Japanese wood. “To get our hands on those casks was almost like finding the Holy Grail,” he says. “Aging Scotch whisky in mizunara oak was an untouched science. And when you think of the 200-year history of Scotch whisky, it’s not very often that you can say that you are the first to do something.”

Mizunara oak trees take about 300 years to reach maturity, and because they are a protected species, only a limited number of examples can be cut down each year. Moreover, the trees typically grow in a gnarled, twisted fashion—a response to the severe, windswept conditions of their native Hokkaido, the northernmost island of Japan—making cutting barrel staves extremely difficult.

The Yamazaki distillery in Japan, which was the first to experiment with mizunara in its aging regimens, initially discovered that the wood imparted an unpleasant spiciness to the whisky. “It’s very pungent at a young age,” McCallum says. “It tastes like incense.” After more than 10 years, however, Yamazaki’s blenders found that the spice character mellowed, and to their surprise, the resulting whisky proved exceptional. The distillery last released a mizunara-aged whisky in 2013, but like other mizunara releases, this bottling was only available in Japan.

Armed with that knowledge, Bowmore finished a blend of its bourbon- and sherry-aged whiskies in the revered Japanese oak barrels. The finished product, Bowmore Mizunara, spent about three years in Japanese oak; and though it bears no age statement, McCallum says it is between 15 and 25 years old. Only 2,000 bottles have been released, each priced at $1,000.

“It had a woody influence four or five years ago, like a recently sharpened pencil or pencil case,” says McCallum. “But that transitioned into an incredibly unctuous fruitiness. It’s that rancid fruitiness that you get with an old Bowmore, but because there are more lactones in Japanese oak, the wood adds a creaminess to the whisky. It’s a pretty mystical and magical product.”