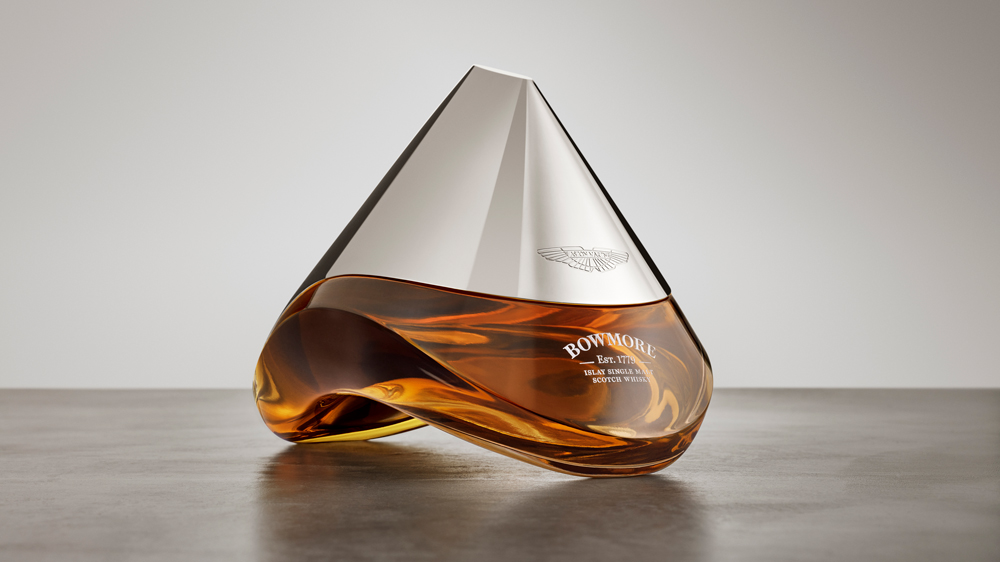 It’s pretty safe to say that you’ve never seen anything like Arc-52, the latest ultra-aged whisky from Bowmore and Aston Martin.

The Islay distillery and luxury automaker Aston Martin have maintained a creative partnership over the last few years, releasing a series of limited-edition whiskies inspired by the British car company’s design aesthetic. And for their latest collaboration, the ultra-aged scotch gets a truly unique vessel. The shape of their whimsical new bottle is more alien spaceship than decanter, resting on two individual points with a flowing design that merges natural and man-made contours and shapes to make it appear almost weightless, according to the distillery.

“Working with Aston Martin remains hugely rewarding and fascinating for me,” said master blender Ron Welsh in a prepared statement. “It continues to inspire us and show us a different way of working, with absolute precision and has allowed us to create what, in my opinion, is the best Bowmore over 50 years old that I have ever tasted.” Of course, the single malt inside this vessel has to be just as luxurious as the glass surrounding it. To that end, Welsh and his team selected whisky aged for 52 years in just two casks, a sherry butt and American oak ex-bourbon hogshead, which were married together in equal proportions. The resulting whisky was bottled at 42.3 percent ABV, and has notes of creamy vanilla and fruit on the nose, followed by citrus, tobacco and light peat on the palate.

“We set out to produce something which hasn’t been seen before, capturing our uncompromising design principles and also the magnificence of the whisky,” said Marek Reichman, Aston Martin’s chief creative officer, in a press release. “I believe that what we have created is truly a piece of sculpture. Taking balance as the most important factor, as we do in designing Aston Martin cars, we’ve harnessed heritage and innovation in perfect balance.”

Arc-52 is limited to just 100 decanters. It won’t arrive here in the US until the fall, but it can be found in key markets in the UK, Germany, Netherlands, China, Singapore, Canada and global travel outlets at a suggested retail price of $75,000. This stunning bottle will surely become a collector’s item, so consider picking up two: one to enjoy and one to keep as a showpiece.