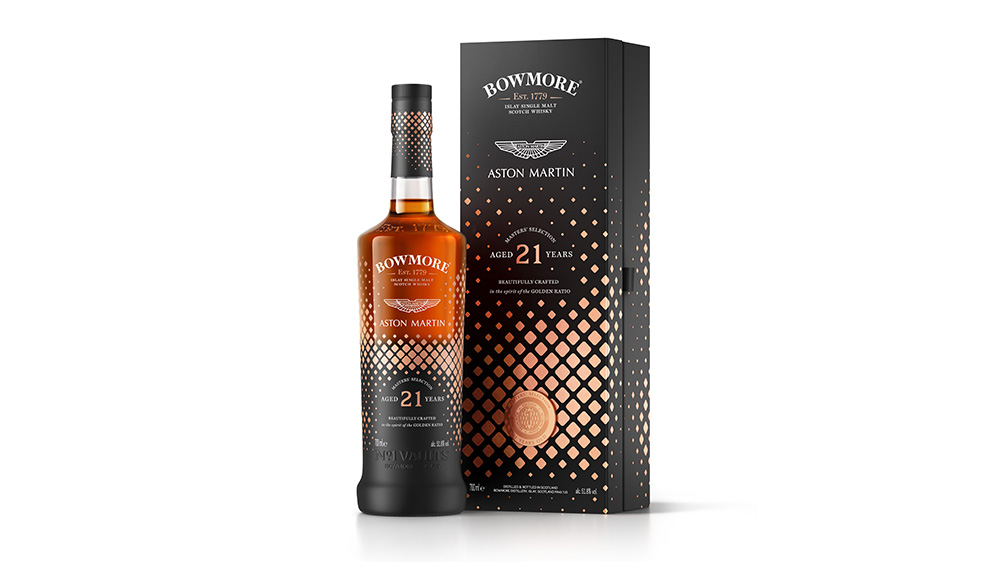 What does the Golden Ratio taste like? A new collaboration from Bowmore and Aston Martin may have an answer.

The two luxury brands are furthering their partnership with the new Masters’ Selection 21 Year Old. Not only is the limited-edition release the first new single-malt Scotch the pair has partnered to create, but it’s also the first time the Isle of Islay distillery has used the Golden Ratio to make a whisky.

The Golden Ratio is the mathematical equation found in nature that can be used to create aesthetically pleasing compositions. Aston Martin uses it to create each of its new designs, and with this in mind, the marque’s executive vice president and chief creative officer Marek Reichman and Bowmore’s head whisky blender Ron Welsh wanted to see (and taste) what would happen if it was used to create a scotch.

The Masters’ Selection consists primarily of 21-year-old Bowmore whisky that has been aged in first-fill Pedro Ximenez and Oloroso sherry casks, according to a press release. That component makes up 61.8 percent of the Scotch, with the remaining parts, including Bowmore matured for more than 35 years, split evenly according to the Golden Ratio. The distillery says the result features hints of sherry, coffee, honey and pepper.

“Proportionality defines every precise detail of designing an Aston Martin. We are constantly striving to achieve the Golden Ratio; the optimal of proportions,” Aston Martin’s Reichman said in a statement. “And it is this force which guides the creation of absolute beauty. To achieve this, we must combine our skill, passion and experience. Coming together with Ron just brings a whole new perspective on this and is hugely inspiring and enlightening. This whisky perfectly and harmoniously brings us together to create a beautiful, yet powerful equilibrium.”

The Bowmore x Aston Martin Masters’ Selection 21 Year Old is available starting this month and costs $300 per bottle. It’s the fifth release the two brands have collaborated on, a list that includes a $66,000 bottle of Black Bowmore DB5 1964 and a whisky-themed DBX SUV. So even though its a limited edition, the new 21-year-old might be a lot easier to get your hands on.