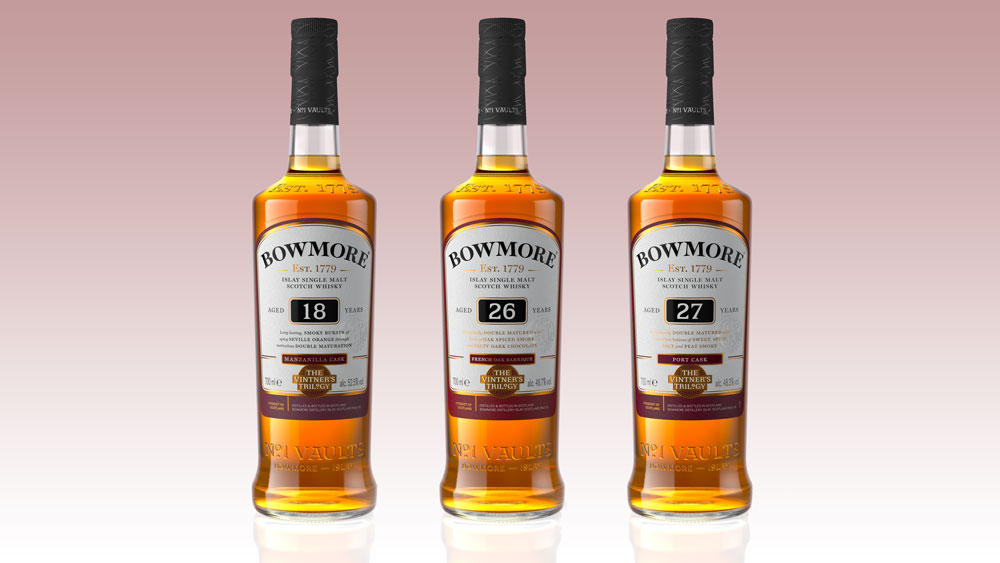 At the tail end of 2017, Islay-based Scotch producer Bowmore unveiled its “Vintner’s Trilogy,” a sampling of rare single malts aged in ex-wine, sherry and port casks. That holiday season offering left some whisky collectors feeling shorted, however, as only the 18 Years Old Double Matured Manzanilla ($127) and 26 Years Old Wine Matured ($540) were made available at the time. Well, at long last, the trilogy has been made whole with the release of Bowmore 27 Year Old Port Cask ($520) —just in time for Columbus Day shopping season, if that’s a weekend that means stocking up on spirits to you.

As anyone paying a modicum of attention to the label might have guessed, the 27 Year Old Port Cask spent some time at rest inside port pipes — “pipes” being the name for the long, narrow European oak casks traditionally used to age Portuguese fortified wine. This Bowmore expression spent 14 years in the port pipes, following a baker’s dozen soaking in ex-bourbon barrels. The casks were housed in the 239-year-old distillery’s famed No.1 Vaults, one of the world’s oldest Scotch maturation houses.

Bowmore 27 Year Old Port Cask is a deep mahogany-colored whiskey that offers pine, sandalwood, and coconut custard pie on the nose, along with subtle medicinal notes. The flavor profile begins with sugarplums along with lemon and salted caramel, followed by Bowmore’s signature sweet and salty notes and a whisp of smoke. There’s additional citrus zest in the mid-palate, along with the vitalizing tang of raspberry coulis and red berries. And it finishes with a slight antiseptic soap note, which isn’t at all as unpleasant as it may sound. Finale also rolls out dried herbs, tobacco, cranberries and a scooch of white pepper. Bowmore 27 Year Old Port Cask is non-chill-filtered and bottled at cask strength (48.3% ABV).