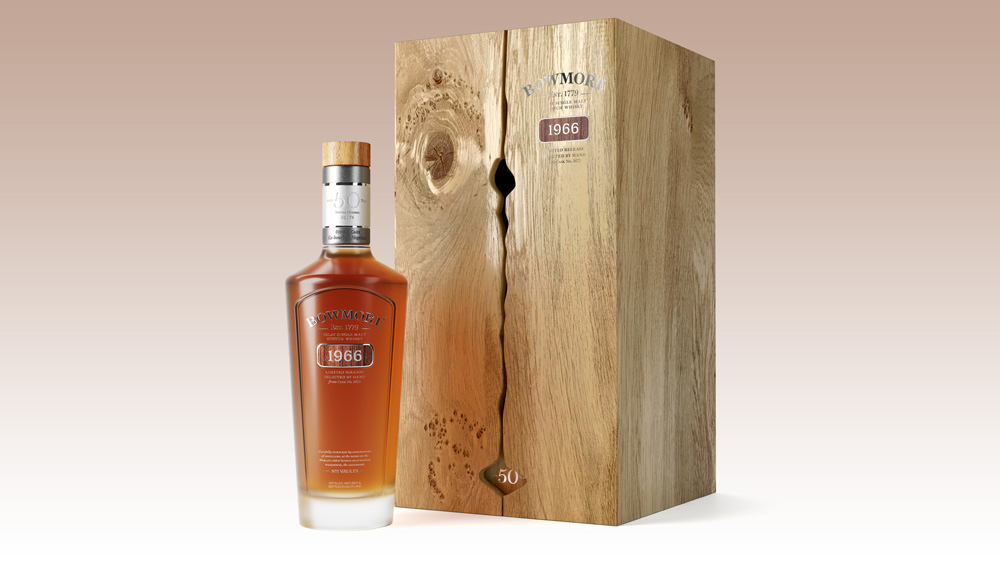 Bowmore is the oldest surviving distillery on the rocky, remote Scottish island of Islay, dating back to 1779. But as is the case with almost all Scotch whiskies, it was distilled exclusively for use in blends. You couldn’t go into a liquor store and buy a bottle of Bowmore single malt until 1966, which coincidentally was the same year a young man named Eddie MacAffer began working at the distillery. In 2016, as MacAffer — who’d gone on to become the Bowmore distillery manager — celebrated his 50th anniversary there, the very last cask of 1966 Bowmore still aging in their famed No. 1 Vault was bottled.

Bowmore 1966 50 Years Old ($30,000) is now being released as part of the ongoing 50 Years Old Vault Legends Collection. It isn’t as well-known as the legendary 1964 Black Bowmore, the last cask of which was bottled and released earlier this year. But with only 74 bottles available worldwide, it’s even more rare, and certainly no less delicious. Aged entirely in ex-bourbon American oak hogsheads and bottled at a cask strength of 83 proof, it has dominant notes of pineapple, followed by a salinity and gentle smokiness — think barbecued pineapple — and a very smooth, dry finish. The ideal aging conditions found in Bowmore’s No. 1 Vault have prevented it from becoming overly tannic, despite 50 years spent in oak.

The elegant packaging does justice to the whisky. The handmade crystal bottle is adorned with silver flourishes and housed in a cabinet made of Scottish oak, which is designed to retain its natural idiosyncrasies so no two will be exactly alike. At the center of each cabinet are five hand-laid silver rings, meant to replicate the tree rings that symbolize the whisky’s five decades in oak.

Two more 1960s-vintage whiskies are planned from Bowmore in the not-so-distant future, as they release the last of their whiskies from that decade. 1966 will be the middle child of the five, chronologically, but there’s a whisky this exquisite will never get lost in the sibling lineup.