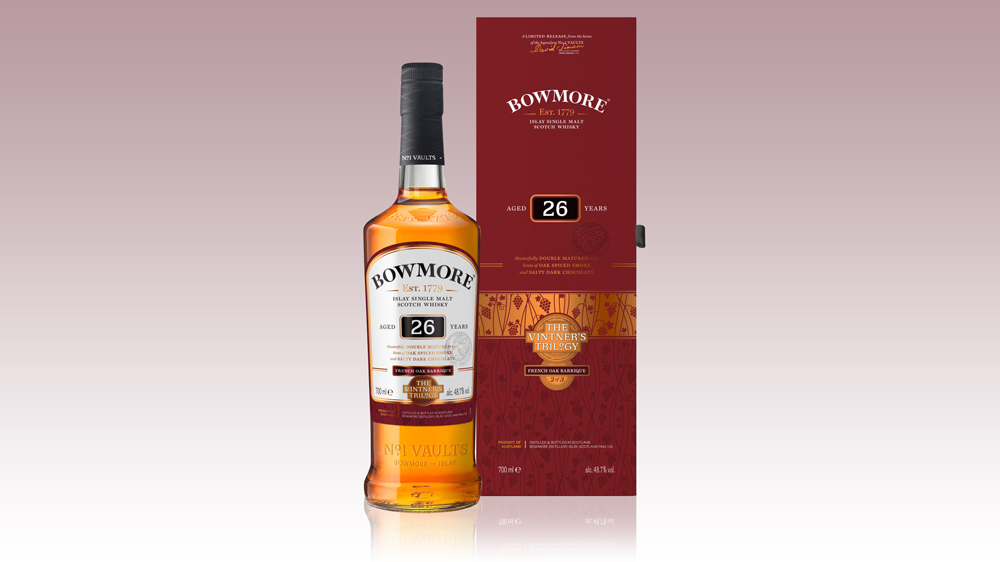 Just in time for gifting season, Bowmore—the oldest licensed distillery on Scotland’s isle of Islay—has unveiled its Vintner’s Trilogy, a collection of single malts aged in ex-wine, sherry, and port casks. The caveat? It might help if the intended giftee isn’t adept with numbers, because at the moment this trilogy consists of just two bottles: 18 Year Old Double Matured Manzanilla and 26 Year Old Wine Matured. The third member of the trio, a 27 Year Old bottling matured in port casks, promises to be available in the fall of next year. Think of it as the gift that keeps on keeping you giving.

The whiskies are aged in Bowmore’s No. 1 Vaults, a storied seaside sanctuary that many a Scotch lover believes to be possessed of magical ontogenetic forces. These vaults are believed to be the oldest whisky cellars, and they sit below sea level in the cool, dark, and damp space, giving the whiskies that age there a special longevity as well as notes of brine.

The Bowmore 18 Years Old ($127) rests in ex-bourbon and ex-manzanilla sherry barrels , which impart a reddish-gold color. The nose is an olfactory olio highlighted by notes of toffee, wild berries, red-velvet cake, and tangerine. The palate offers bitter orange, plenty of peat smoke, and apple and floral sweetness. It’s bottled at cask strength at 105 proof.

The 26 Year Old Wine Matured ($540) spends half of its aging life in ex-bourbon barrels and the other half in wine barriques. It smells of burning logs, menthol, and blackberries. There’s a fair degree of tropical fruit on the nose, as well. It’s a full-bodied, salty, and smoky cask-strength whisky (97.4 proof) with confectionary notes. The finish is long with pleasant hints of spice.

This release comes hard on the heels of Bowmore’s new 1966 release.