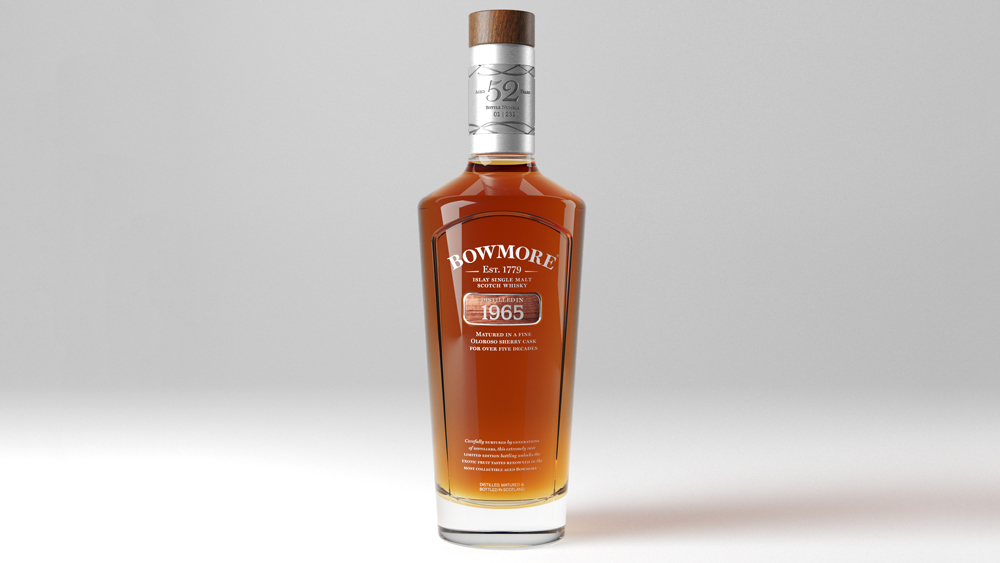 Dating back to 1779, Bowmore is the oldest surviving distillery on the Scottish island of Islay and home to the world’s oldest Scotch maturation warehouses, the No. 1 Vaults. The whisky maker’s time-honored production methods and smoky expressions have made it a favorite for whisky collectors. (Case in point: the Bowmore 15 Year Old expression earned a spot on Robb Report’s list of the 20 Best Whiskies You Can Buy Right Now.)

Just in time for the holidays, the distinguished distillery is releasing a major new libation guaranteed to make the season extra merry and bright: the Bowmore 1965 Single Malt Scotch Whisky, which is the fourth expression from its 50 Years Old Vault Series. It was matured for 52 years in the warehouses, and the end result was well worth the wait.

The expression was one of the first to pass through Bowmore’s then-new steam heated stills in 1965, which ensured smoother, more controlled distillation—bringing out richer qualities during maturation process. The whisky was then matured in oak casks formerly used for bourbon, claret, or sherry. The decades-long maturation unlocked the same rich fruit and smoke tastes found in the 1960s Bowmore whiskies, which are considered some of the brand’s most collectible expressions.

On the nose, the whisky offers hints of dark chocolate, sweet beeswax, and rich fruits, which develops into burnt heather and a fresh spring flower finish. The flavours are balanced with a hint of dried fruit, apricots, and jasmine. It’s best served neat. The whisky will be packaged in gorgeous hand-blown glass bottles with sterling silver adornments and housed in hand-crafted Scottish oak cabinets.

Only 232 bottles will be released in December, with a suggested retail price of $30,000. The expression joins Bowmore’s 1966 Single Malt as the perfect stocking stuffers for the whisky lover in your life.