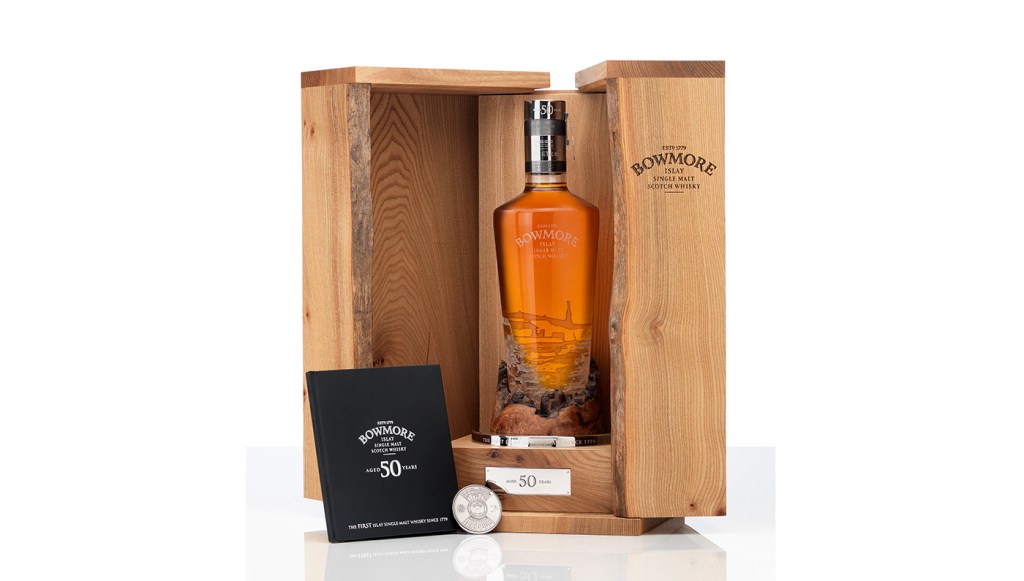 When a rare old whisky sells out of its limited run, it’s always tempting to think that there are still a few stray cases hanging around the distillery—which will be released at a time of optimal convenience for those of us who missed it the last time around. So it’s a little disconcerting to find out that Bowmore, the oldest whisky distillery on Islay, is releasing the last 50 bottles of its 1961 50-Year-Old single malt. Whiskyphiles have had their chances; this is the fourth year running that Bowmore has released 50 bottles of the 200 taken from the lone cask that made the half-century journey. The difference is that after this run, the 1961 is gone for good.

To commemorate the bittersweet occasion, Bowmore has created a package worthy of the whisky inside. The hand-blown bottle features a sterling-silver neck collar and cork top made by Fattorini silversmiths; it’s encased in a gorgeous handmade cabinet made from Scottish Elmwood by master carpenter Peter Toaig. The whisky itself is sublime—and surprising. The dry oakiness one would expect from a whisky of this age is almost completely absent. Instead, it’s a fruit-forward rush of pears, apples, and peaches, evolving into tropical fruits like mango and lychee on the palate, with the Bowmore’s familiar smoky notes gaining presence at the back of the throat. It’s soft and smooth enough to be an everyday dram, but with a complexity that can only come from such long aging.

The farewell of the 1961 50-Year-Old is also an introduction to what will be a six-part series of 50-year-old Bowmores, all distilled in the 1960s. The decade was a great one for the distillery; its 1964 “Black Bowmore” bottling is one of the most legendary single malts ever released. Collectors with a mind to own a complete set should get started now. The suggested retail price of the 1961 is $23,000, a price that will likely increase as bottles make their way to the secondary market. (bowmore.com)