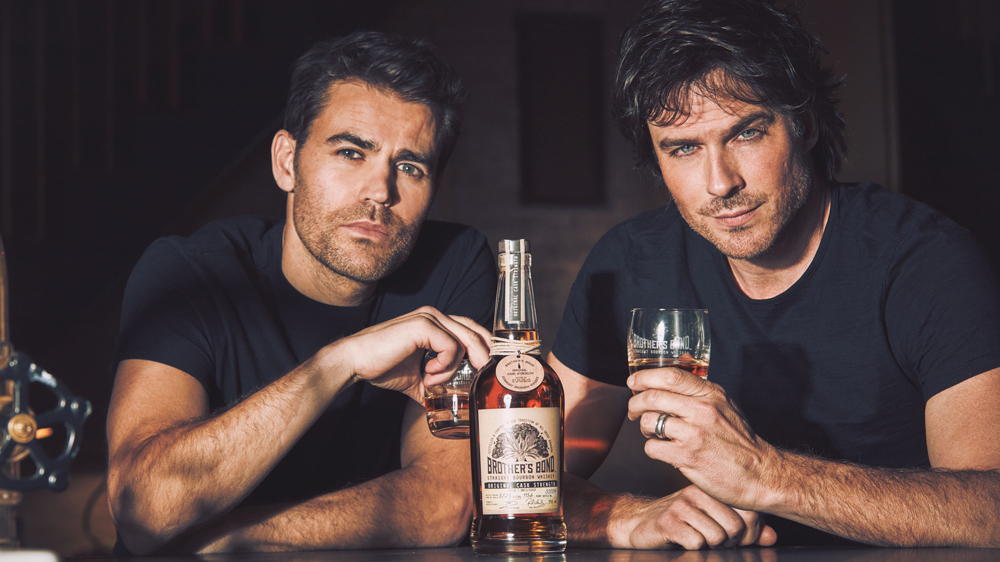 Are you thirsty for another celebrity booze brand? If so, you’re in luck.

Actors Ian Somerhalder and Paul Wesley launched Brother’s Bond Bourbon in May of 2021, several years after their long stint on The Vampire Diaries television show ended. And now, after a few delays, they are bringing a cask-strength version of the bourbon to market, one that’s strong enough for hardcore whiskey fans but accessible to novices as well.

From the get-go, the two intended for Brother’s Bond to be a bourbon that anyone could drink, while still maintaining a high level of quality. The bourbon is produced at MGP in Indiana from a mashbill of 65 percent corn and 22 percent rye, with the remainder made up of wheat and barley, and bottled at 80 proof. The new cask-strength version is a limited release that clocks in at 115.8 proof, which is strong but not high octane enough to melt your face. “This was the time to release this whiskey,” said Somerhalder in a recent interview. “People have been asking, some of them have even been bitching.”

The point of releasing a cask strength bourbon was to introduce Brother’s Bond to drinkers who might normally steer away from anything 80 proof, the lowest at which whiskey can legally be bottled. Wesley pointed out that a lot of bourbon fans forgive this minimum ABV when it comes to brands like Basil Hayden, but for some reason they wouldn’t give Brother’s Bond a chance. “From the beginning, we knew we were gonna get some of that from the aficionados,” he said. “This is going to be more for purists who want to try the whiskey in its natural form.” But according to Somerhalder, it runs both ways. “Even at a higher ABV, our flavor profile shines through, without sounding like a goofball, literally like a beacon in the night. People who don’t typically drink barrel-proof whiskey are drinking this going, ‘Now I get it.’”

As far as that celeb booze brand thing, they both claim to be aware of the pitfalls. “We’re aware of the stereotype of two guys who slapped their name on a bottle of bourbon,” Wesley said. “And the only way to counteract that,” interjected Somerhalder, “is with quality. You can argue with Paul and I and say we’re not good actors and we haven’t won an Oscar, but you cannot argue with quality.”

Wesley acknowledged that both the whiskey being 80 proof and celebrity aspect may be unappealing to some. “Some people might be like, ‘It’s a cash grab,’” he said. “But the idea was just to introduce bourbon to the consumer and not make it too hot, too high proof. But we also knew we were gonna later introduce other age statements and proofs, so we would have an offering for everyone.”

A Brother’s Bond rye whiskey is in the works as well, which Wesley says has similar DNA to the two bourbons they have already released (in other words, this won’t be a typical MGP 95 percent rye, but more in a Kentucky style with somewhere above 51 percent rye in the mashbill).