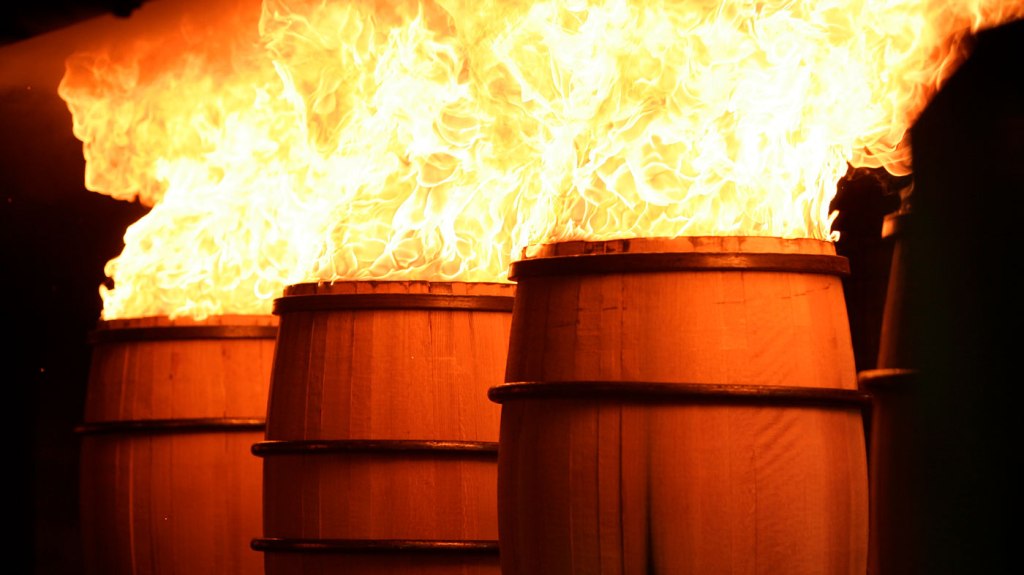 The transformation that occurs when a raw spirit is left to age within a finely crafted oak barrel is nothing short of liquid alchemy. So it’s no surprise that the coopers responsible for conjuring these mystical vessels treat their task with reverence.

Coopers, of course, are the craftspeople who produce the staved wooden vessels used to mature all manner of alcoholic beverages. In the case of so-called brown spirits, barrel aging is arguably the single most important step in the production process. When a distillate goes into wood, it is devoid of color and, for the most part, flavor. It emerges from slumber, however, looking and tasting altogether different. In the liquor business, barrels are the ultimate agents of change.

Brown-Forman, purveyor of Jack Daniels and Woodford Reserve among others, is the only major distiller in the United States that owns and operates its own cooperage. It is also the only one that makes a whiskey actually designed to honor the barrel—Coopers’ Craft Kentucky Straight Bourbon, which was introduced last year.

Founded in 1945 in Louisville, Kentucky, the Brown-Forman Cooperage is one of just a handful of major cooperages in the United States that produce new American white oak barrels for distilled spirits, on average creating more than half a million barrels annually. The casks, which hold roughly 53 gallons of liquid, are used to age bourbon and Tennessee whiskey before being repurposed as rest stops for spirits in almost every category, from rum to gin to tequila.

It turns out it takes a village to raise a barrel. The Brown-Forman Cooperage is a sprawling operation with hundreds of employees. The most experienced folks on the line are the coopers, with whom the ultimate responsibility for the integrity of every cask lies.

American white oak is a tight-grained hardwood uniquely suited for bourbon barrels. Brown-Forman’s wood supply originates mostly in the central and northeast regions of the country. After being harvested in a sustainable manner that promotes regeneration, logs are quartersawn to produce staves with the right orientation of the grain and growth rings to provide maximum strength and leak resistance. The staves, along with the barrel tops and bottoms, are air-dried outside the cooperage for months until the moisture content is reduced to 25 percent. The wood then spends about a month inside a heated warehouse until the moisture content reaches 12 percent. At that point, the wood is ready for processing.

A barrel raiser at the Brown-Forman cooperage assembles approximately 40 barrels an hour by hand, setting between 31 and 33 staves of various widths into a temporary steel ring. It’s a high-pressure job—if the staves don’t fit together just so, the barrel is almost certain to leak. And a leaky barrel is an expensive mistake. After it’s raised, the cask is steamed so the wood can be bent without breaking.

The coolest step in the barrel-making process also happens to be the hottest. Known as charring, bursts of white-hot flames are shot into the barrels, leaving the insides looking like a burnt-out campfire. Charred barrels act as filtration systems for whiskey, removing unwanted compounds as the raw spirit (or “white dog”) interacts with the wood. Whiskey gets its color from tannic acid in the burnt wood.

There are many components to white oak that influence the flavor of whiskey. Foremost among them is hemicellulose, which breaks down into sugars when scorched that caramelize the inside of a barrel. That’s where those delicious toffee and brown sugar notes in a whiskey come from. Oak also contains lignin, an organic complex polymer that imparts vanilla and earthy flavors. Tyloses, a substance that blocks the sap-conducting pores of the wood when heated naturally, prevents leakage. Barrels that drip whiskey are barrels that bleed profits.

Nails are never used in the barrel-making process; glue, rarely, and only then to recover small portions of wood in support of zero-waste goals. Instead, bilge, quarter, and head hoops fastened around the staves by rivets are what keep casks intact. At the Brown-Forman Cooperage, iron used to form the hoops comes in coils that are run through a machine that cuts them to the proper length, punches holes for the rivets, and slightly flares the iron. All Brown-Forman casks have the letter “B” stamped on the rivets.

Once a barrel is assembled, a bunghole is drilled into one of the wider staves. This is where liquid enters and exits the barrel. After the bunghole is in place, the barrel undergoes pressurized water testing to detect leaks. From there it’s off to a final inspection station. If it passes muster, it’s loaded onto a truck and shipped to the distillery, where it’s filled with raw spirit almost immediately.