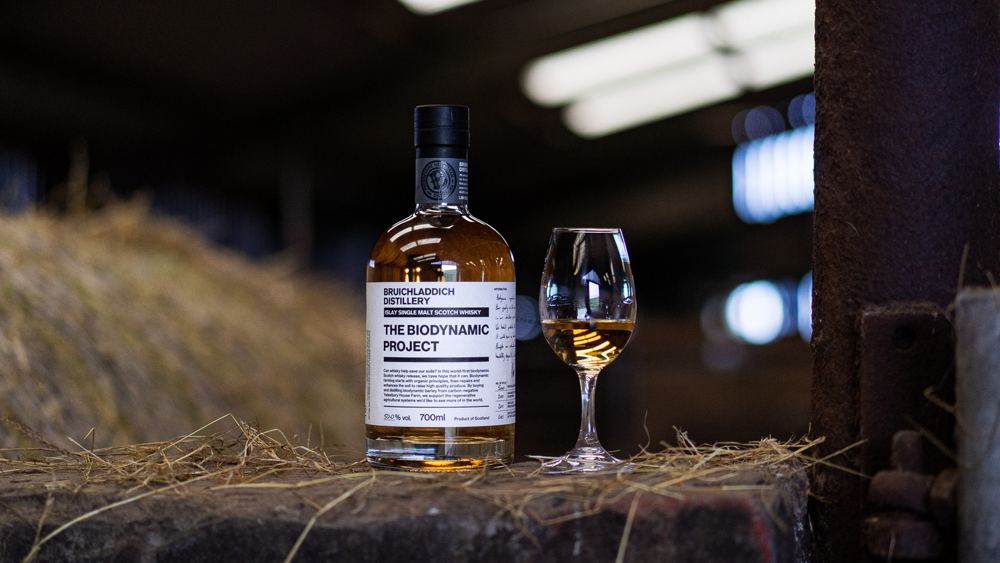 Biodynamic is a well-known buzz word in the wine world, but it hasn’t really been applied to whisky until now. The first two distilleries to tackle the concept have ties that explain why they are at the vanguard. Ireland’s Waterford Distillery released the first biodynamic Irish whiskey this fall, so it makes sense that Bruichladdich would be the first Scottish distillery to follow suit. Mark Reynier, former CEO at Bruichladdich and now head of Waterford, was instrumental in laying down whisky made from biodynamic barley at the Islay distillery a decade ago. Bruichladdich is known for its intensive explorations into the effects of terroir on whisky by releasing single farm, single vintage whiskies, as well as expressions that are made from one type of barley like the Bere Barley 2011 release. The Biodynamic Project is said to be Scotland’s first biodynamic whisky, but what exactly does that mean and how does it taste?

First of all, the term biodynamic in whisky means pretty much the same thing it does in wine—no chemical pesticides or fertilizers were used on the barley, and the soil where it grows is treated as part of an ecosystem that sustains itself through natural processes. But when it comes to whisky, there’s a conundrum: the doubters and contrarians argue that the act of distillation negates the effects of terroir, which conceivably could apply to biodynamic practices as well. Yes, this might be an organic whisky made from barley grown sustainably, but can you actually taste the difference? That’s difficult to say, although there have been studies that have provided proof of the effects of terroir, so why not biodynamics? Ultimately maybe it’s beside the point, because if the whisky is good and it was made using methods that are environmentally friendly, isn’t that a win-win?

And yes, Bruichladdich’s Biodynamic Project is a tasty single malt. It was aged for ten years in first-fill bourbon casks and was made from Westminster barley harvested in 2010 at Yatesbury House Farm in Wiltshire, England. This is unusual for Bruichladdich, which always uses Scottish barley to make its whisky, but there are no biodynamic barley producers in Scotland so they had to look elsewhere. The whisky is unpeated and, like all Bruichladdich whiskies, is bottled without chill filtration or any color added. There’s a hint of spice on the palate, but overall this is a lovely soft and sweet whisky with notes of honey, vanilla, peach, pear, raspberry and some caramel on the finish.

The point for head distiller Adam Hannett and the Bruichladdich team was twofold. First, there was the sense of experimentation and boundary pushing within the world of scotch whisky that is often the Bruichladdich MO, as well as the joy of just tinkering with preconceived notions in an industry that has been set in its ways for decades. Then there’s the environmental impact, or lack thereof, that biodynamic practices have on the soil and the world at large. The distillery touts a carbon audit that basically said the effects of the biodynamic practices at the farm had a carbon-positive effect—in other words, more carbon was kept in the soil than was emitted. That seems like no small feat given the looming (and very current) effects of climate change. But, as is always the case, flavor and quality of the whisky are paramount, because I doubt even the most eco-conscious distillery would want to promote a crap whisky. Fortunately, in this case, The Biodynamic Project is both good for the environment and good in the glass.