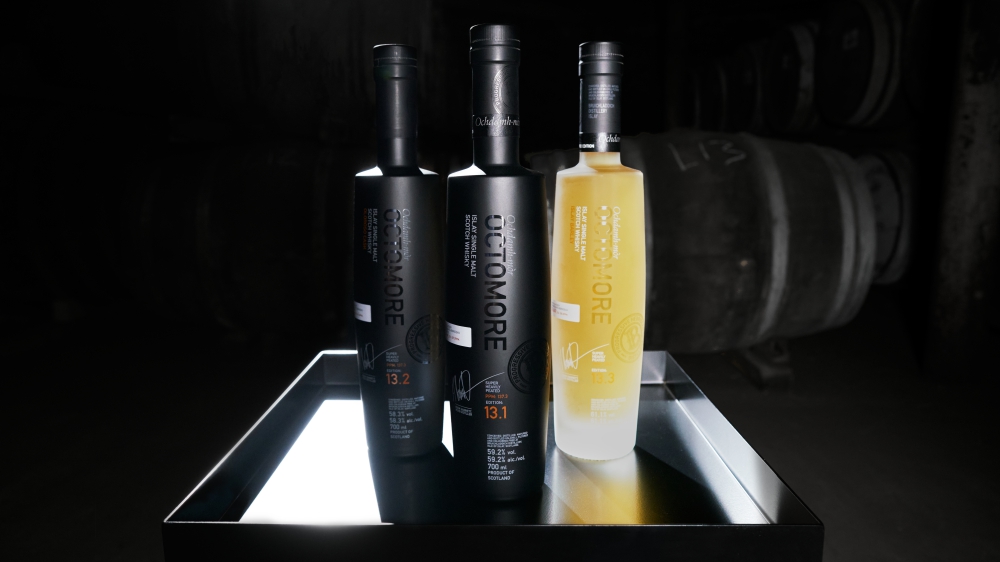 In the world of scotch whisky, how smoky is too smoky? Apparently, scotch distillery Bruichladdich has not reached the upper threshold yet, as proven by the annual release of the extremely, heavily peated Octomore series. But the launch of the 13th edition shows that, once again, there’s a lot of nuance behind the smoke.

The Islay distillery’s core expression, The Classic Laddie, is unpeated and has nary a whiff of smoke on the palate. The Port Charlotte series starts to get pretty damn smoky, but Octomore is where the fire really erupts. This trio of whiskies is an exercise in not just peat, but the effects of barrel maturation, barley provenance and terroir on the flavor of a whisky. And it’s also proof that a single malt scotch doesn’t have to be aged for at least a decade to obtain complexity of flavor. “For me, getting to push this liquid to its very limits is a pleasure and a welcome challenge year on year,” said head distiller Adam Hannett in a statement. “This 13th series is made up of a selection of incredible single malts with a real complexity and depth of flavor. Each one has its own distinct character while still staying true to the Octomore DNA, balancing intense peat smoke with our elegant signature style.”

Octomore 13.1 is sort of the control whisky here, as is the case each year with the first whisky in the series. It was distilled in 2016 from 100 percent Scottish Concerto barley and matured in first-fill bourbon barrels for five years and then re-casked in 2021 into fresh first-fill barrels to add a burst of toffee, coconut and vanilla flavors, according to the tasting notes. The peat level is a whopping 137.3 ppm, which translates to super-duper smoky for the uninitiated. This whisky was bottled at 59.2 percent ABV and is non-chill filtered with natural color, as is all the whisky at Bruichladdich.

Octomore 13.2 shares the vintage and barley type with 13.1, but differs in its maturation. This whisky spent its entire five-year aging period in first-fill Oloroso sherry casks from Spain, offering a counterpoint to its sister whisky in flavor and style. The peat level is the same astronomical number, and it’s bottled at a slightly lower 58.3 percent ABV with notes of nut, orange, dried fruit and a hint of “maritime tang.”

Octomore 13.3 is a study in Islay terroir, having been distilled from 100 percent Concerto barley grown on the Octomore Farm near the distillery. This too was distilled in 2016, but was matured in a combination of first-fill American whiskey barrels and second-fill French oak casks for five years. The peat level is a bit less aggressive here at 129.3 ppm, and it’s bottled at a higher 61.1 percent ABV with notes of vanilla, brown sugar and green fruit.

You can try the new Octomore series for yourself when the whiskies launch on 10/18 here in the US, ranging in price from $219.99 to $299.99. Make no mistake, these are intensely smoky single malts that will put hair on the soles of your feet, but it’s not just a marketing ploy—there is a range of nuance of flavors here that come into play as you sip.