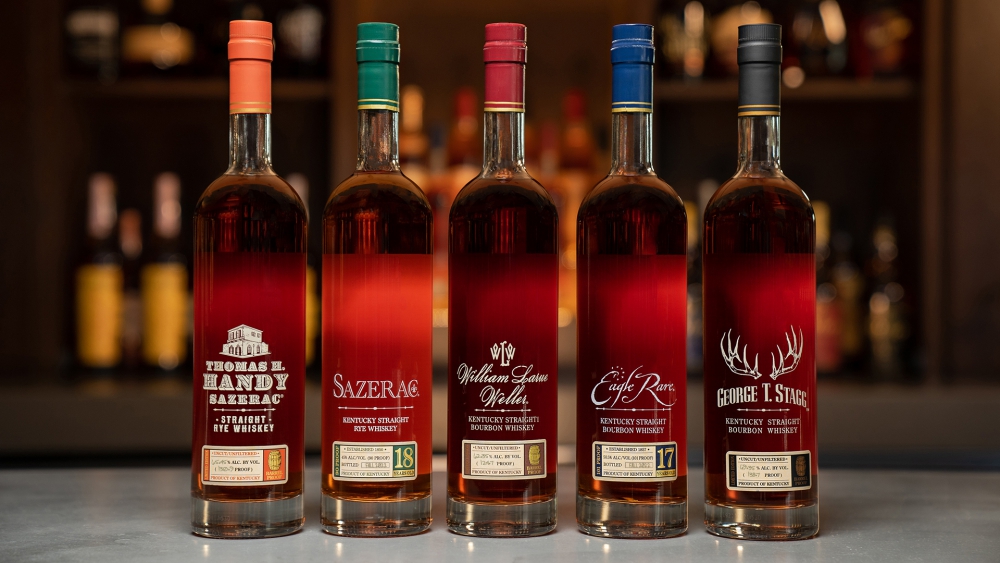 All the unicorns are coming back this fall. No, we aren’t talking about some D-level Game of Thrones ripoff, we’re talking unicorn bottles of bourbon and rye, the rare and elusive quarry of whiskey hunters. The details of the new Buffalo Trace Antique Collection have just been announced, and we got to sample them all to let you know how they taste and all the juicy details.

Last year, fans were disappointed by the omission of the beloved George T. Stagg Bourbon from the lineup (although that didn’t stop them from seeking the collection out), due to what the distillery described as the whiskey just not meeting its standards. Well, that bourbon is back this fall, along with four other (mostly) high-proof whiskeys. Just like the recent Pappy Van Winkle announcement, the suggested retail pricing of bottles for BATC is laughable—$99 each, to be exact. The reality is that these will sell for 10 or 20 times that price, as a quick look online will confirm. Nevertheless, there are some fine whiskeys in the collection this year, and all the details you need to know are as follows.

This year’s Stagg clocks in at 138.7 proof, the highest since 2016 according to a rep for Buffalo Trace. That’s pretty damn high, and while there’s a wallop of spice, heat and red-hot cinnamon on the palate of this uncut and unfiltered whiskey, it’s very drinkable all the same. This year’s release was distilled in 2007 and aged for 15 years and five months in warehouse K at the distillery. In addition to those spicy notes, there are rich chocolate, brown sugar, molasses and pecan pie flavors on the palate.

This is Buffalo Trace’s uncut and unfiltered wheated bourbon expression, with this year’s release coming in at 124.7 proof. If you’re a fan of Booker’s or Elijah Craig Barrel Proof, that seems pretty reasonable. The whiskey was distilled in 2010 and aged in warehouses C, K and N (technical details that most don’t care about, but we see you bourbon nerds who do). This is a standout in the collection, with a nice note of dark chocolate Peppermint Patty showing up over layers of plum, vanilla, espresso and red berries. The spice is tamped down here, with softer tones from the wheat shining through.

If you know and love Eagle Rare, and who can blame you, you’ll likely be excited to try this 17-year-old version bottled at 101 proof (just like Wild Turkey). The whiskey was distilled in 2005 and aged in warehouses H, K and L. This isn’t as flashy or exciting or brash as the other bourbons here, but it’s living in a different lane—an older version of one of Buffalo Trace’s staples. There are milk chocolate, coconut, tobacco, leather and caramel notes here, classic bourbon flavors that are dependable if not groundbreaking. Still, at 17 years old this avoids the pitfall of becoming overly tannic.

Now we enter the world of BATC rye whiskeys, and this 130.9 proof expression packs a punch. This is Kentucky rye, not MGP 95 percent rye, but it’s spicy and fruity all the same with cherry, black pepper, cinnamon and even some incense notes on the palate (if you told me this whiskey had a mizunara finish, I might believe you—but there wasn’t). This is the strongest Handy since 2012, and despite the price and rarity and askew looks, I’d be tempted to make a Manhattan on steroids with this bottle.

Like the Eagle Rare expression, this is another older version of a staple. This rye was put into barrels in 2003 and 2004, aged in warehouses K, M and P, and bottled at 90 proof. What it lacks in heat and intensity of ABV when compared to Thomas H. Handy, it makes up for with rich notes of oak, custard, orange and a bit of menthol on the finish. Nearly 20 years in barrels has truly not put this whiskey into bitter tannic territory, and rye whiskey fans are going to appreciate the nuances on the palate.

The entire BATC will be available in stores and online starting in early to mid-November. As far as advice on how to get a bottle—keep your eyes peeled, talk to your local liquor stores and hope for a bit of magic to help you along (these are unicorns, after all).