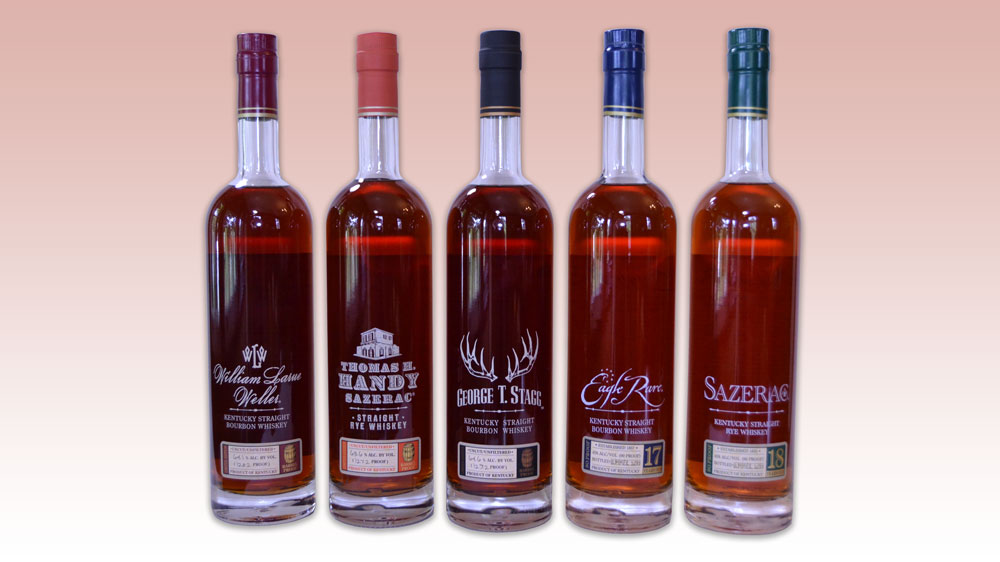 What could be more exciting than scoring an impossible-to-find bottle of Pappy Van Winkle? For a lot of American whiskey fanatics, the answer is the Buffalo Trace Antique Collection, five extra-aged bourbons and ryes ($90 apiece) from the venerable Kentucky distillery that are considered among the finest whiskeys produced in the States. Each year’s allotment disappears from shelves faster than you can say “barrel strength.” Here’s a small taste of each bottle in the new collection.

Eagle Rare 17 Year Old Bourbon. Seventeen years of aging is often a sweet spot for Scotch whiskies, but it is rarely a mark achieved by bourbons. This one, bottled at 90 proof, shows its maturity with plenty of deep char, peppery spice, and strong black-tea notes, with hints of maple syrup and cotton candy peeking through. It’s the rarest of this year’s Antique Collection with fewer than 1,500 bottles produced.

Sazerac 18 Year Old Rye. Demand for Sazerac’s 18 year old has escalated as rye whiskey has grown in popularity, and this year’s release shows why this category has such appeal. It’s light-bodied with dark fruit notes up-front, morphing seamlessly mid-palate to a mellow, tingly spice. The smooth, clean finish has a lingering sweetness. A few drops of branch water add bright notes of cherries.  Fewer than 2,700 bottles were produced this year.

William Larue Weller Bourbon. Weller is known as “the original wheated bourbon,” with a history said to date to 1849. Other expressions in the Weller portfolio are bottled at 90 and 107 proof, but the Antique Collection releases are barrel-strength. This year’s bottling, aged for 12.5 years, comes in at 128.2 proof, with a light, sweet nose and rich vanilla and caramel notes mingling with hints of raisin on the tongue. The finish is long and dry, with only a light, spicy kick belying the high alcohol content. About 19,000 bottles are available.

Thomas H. Handy Sazerac Rye. Named after the first bartender to include rye instead of Cognac in the classic Sazerac cocktail, this rye is aged a touch under 6.5 years and bottled uncut and unfiltered at 127.2 proof. Its aroma is slightly funky—almost like a pot-still rum—but on the palate it is smooth and sweet, with toffee and vanilla atop a layer of rye spice. It’s got a rich, slightly bitter, dark-chocolate finish that seems to last forever; adding a little water brings out the sweeter chocolate notes without dulling down the other flavors. About 14,000 bottles were produced.

George T. Stagg Bourbon. Stagg is perhaps the most beloved of the Antique Collection. It’s a monster of a whiskey, aged for 15 years and 3 months and bottled at a staggering 129.2 proof straight out of the barrel. Surprisingly, however, this is drinkable unadulterated. It’s a classic bourbon, redolent of vanilla, toffee, and caramel, with coffee and unsweetened chocolate coming to the fore on the finish. Almost 38,000 bottles were produced—a substantial increase from last year—but don’t expect them to stick around for long.