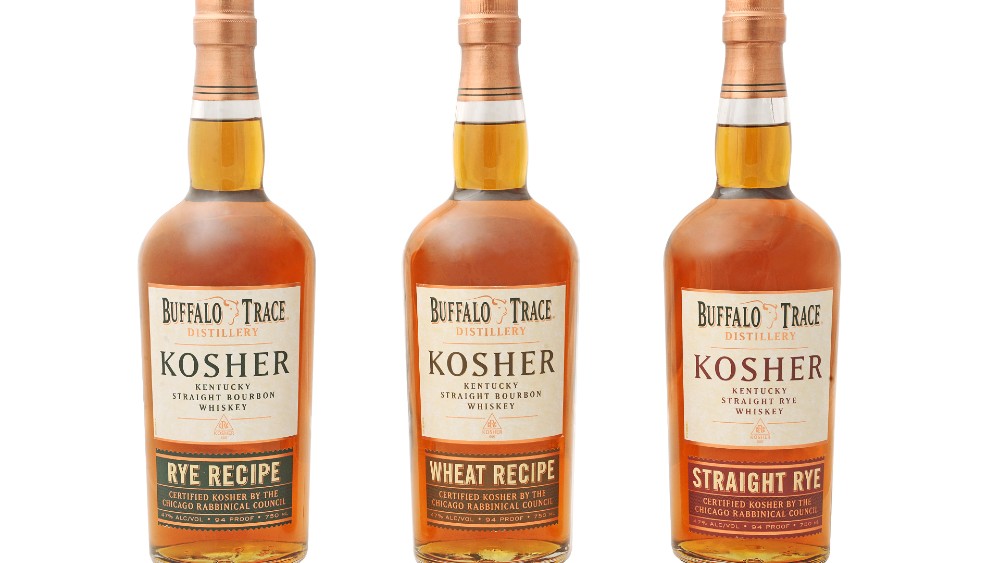 What does it take for a whiskey to be considered kosher?  There are two schools of thought on the subject. As long as it’s made exclusively from grains and it doesn’t touch a barrel that previously held any sort of wine (sorry, ex-sherry cask buffs), you’re generally considered safe. But there’s a difference between being not not-kosher and actual certified kosher-ness, and Buffalo Trace has crossed the divide with the release of three new whiskeys, created with the guidance and supervision of the Chicago Rabbinical Council (cRc). The trio—Kosher Rye Recipe bourbon; Kosher Wheat Recipe bourbon, and Kosher Straight Rye—are rolling out this week, just in time for the end of Passover.

Getting kosher certification is a tricky business, involving strict separation from pretty much everything non-kosher, with rabbinical oversight thrown in. So in 2012, when the process began, Buffalo Trace had to buy oak barrels specifically for the purpose of aging kosher whiskey, with the purchase overseen by the cRc. They were aged in a special kosher section of the warehouse. And when it came time to bottle the whiskey, the bottling lines had to be meticulously cleaned to make sure there was no contact with a single drop of boozy chametz (forbidden substance).

It may seem a shame that Buffalo Trace is shipping its new whiskeys too late for Passover, but there’s a reason for the timing of the rollout. During the week of Pesach, no grain that has risen or fermented is allowed to be consumed. That means matzoh instead of bread, and kosher wine (man oh Manischewitz!) in place of whiskey. In fact, observant Jews are not even supposed to own whiskey at Passover, let alone drink it, which may be a deal breaker for many a Jewish whiskeyphile. Regardless, it’s an exciting development for the kashrut community, and for whiskey lovers of any religious persuasion.