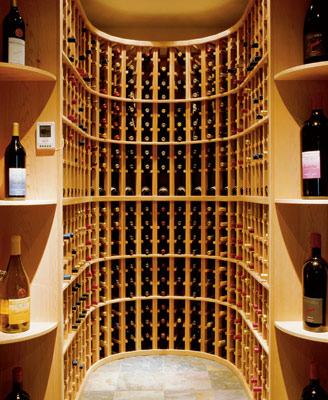 Wine is perhaps the most ephemeral of all collectibles. A Monet can hang on a living room wall unchanged for decades, while its owner continually basks in its radiance. Wine, on the other hand, not only changes considerably throughout its limited lifetime, but also gives its ultimate pleasure only once. Indeed, even the most astute collectors cannot have their wines and drink them, too.

As any collector knows, when the moment does arrive to remove the cork and pour, the wine will be less inclined to disappoint if it has been properly stored. The correct conditions will aid in the long-term development of the individual bottles and—should you choose to part with them—help to maintain their eventual resale values.

“It’s all about storage,” says John Tilson, a collector and the founder of The Underground Wine Journal. He notes that long-term stability of temperature and humidity is essential for preserving the wine. A few collectors set temperatures in their cellars as low as 45 degrees in what some say is a dubious effort to slow the aging process of their wines. Most agree that 55 to 60 degrees is optimal, with as minimal fluctuation as possible. Relative humidity is not as critical as temperature, but a relative humidity of from 65 percent to 75 percent is ideal. If the humidity level falls too low, it will contribute to excess evaporation from the bottles. If it rises above 80 percent, labels can wrinkle, and the corks can rot.

The choice of storage systems is nearly limitless, but each falls into one of two categories: prefab units or custom installations. Companies such as International Wine Accessories (www.iwawine.com) and the Wine Enthusiast (www.wineenthusiast.com) employ full-time consultants who help customers choose from among their many available prefab storage units, which include high-end models with price tags as high as $10,000. While these units may be appropriate for novices, most serious collectors will eventually graduate to a custom-designed cellar that suits their individual needs and tastes.

For custom installations, interior designers can assist in the process of creating a cellar that fits into a house’s overall design scheme. The American Society of Interior Designers (ASID) maintains a national referral service, and the busy Los Angeles chapter has its own Designer Selection Service; both can help with the selection of a cellar-savvy interior designer.

One such L.A. designer is Cindy Burnett, whose clients include former major league baseball pitcher Bret Saberhagen. Much of Saberhagen’s 1,000-bottle collection, consisting mainly of Napa Cabernet and Meritage, surrounds his Portuguese-style formal dining room. When not in use for dinner parties, the room can be kept at cellar temperature by means of hermetically sealed doors. For long-term storage, Burnett convinced Saberhagen to add an additional cellar space behind a door made of glass and wrought iron.

Like many collectors, Adam Saitman, another Burnett client, had his own ideas about cellar design. Saitman designed his house, a Craftsman-style structure reminiscent of the Pasadena houses of Greene and Greene, and his 1,800-bottle cellar, located behind sliding glass doors just off the dining room, reveals the attention to fitment and detail that is a hallmark of this style. “I was very lucky to find an amazing carpenter,” Saitman says, referring to the beautifully finished mahogany doors.

While an interior designer may suggest thematic elements, configurations, or color schemes, he or she will eventually solicit the services of a professional cellar builder to construct and install the project. Aside from the racking and cabinetry, cellar builders can address technical issues such as ducted versus ductless refrigeration, diffusers for proper airflow, insulation from vibration, tempered glazing, lighting, alarm systems, wiring for computer access, and the myriad other concerns that a custom installation entails.

Saitman’s cellar was built by Paul Goolnick of Viking Custom Products in Los Angeles. Goolnick began his business by building saunas, but he moved into wine cellar construction in the early 1980s as wine collecting became increasingly popular in the United States. His business now comprises more than 90 percent cellar design, including a lavish installation for the Southern California home of collectors Darioush and Shahpar Khaledi, owners of Napa’s Darioush Winery.

Evan Goldenberg of Design Build Consultants in Greenwich, Conn., is unusual among cellar builders because he is a licensed architect. Like most architects, he employs sophisticated CAD software to render the cellar designs before construction begins. “But before I start designing,” Goldenberg notes, “I get to know the clients—their past purchasing habits, how many times a week they consume wine—in other words, whether they’re hooked.” Goldenberg advises building a cellar twice the size you think you need. “If my client has 1,000 bottles, I build for 2,000. Even then, they’ll fill it overnight.”

David Spon, a top cellar designer based in McLean, Va., also begins the design process by becoming familiar with the client. “It’s about dialogue,” Spon says. His most recent project, a cellar located on the third floor of a landmark 1896 mansion in New Orleans, presented special challenges, such as reinforcing the house to support the weight of the wine. “Each project is different from the last,” says Spon.

Each cellar created by Christine Hawley, a New York designer with 17 years’ experience, is also unique. She refers to her projects as “the Rolls-Royces of wine cellars,” with prices sometimes exceeding seven figures. These projects include the 20,000-bottle private Enoteca in the basement of the Loft, a luxury SoHo co-op that caters to wine collectors. Married to Michael Aaron, chairman of New York wine merchant Sherry-Lehmann, Hawley now takes on only three or four projects a year. She describes her signature style as being “as romantic as possible” and often employs elaborate ironwork and heavy fixtures reminiscent of European château cellars.

One of the country’s most sought-after cellar designers is Paul Wyatt, a cutting-edge California builder who works out of a 25,000-square-foot facility near the Napa airport. Wyatt, who was trained as an atomic physicist, designs cellars that are as impressive as the collections they house. Using patented scalable systems of modular racking as well as techniques such as Japanese-style nailless joinery, Wyatt has designed, built, and installed cellars everywhere from Boston to Bangkok. “The best clients are the ones who give me absolute freedom,” he says, “and my job is to make sure they’re deliriously happy.”

As with every cellar designer, it is also Wyatt’s job to ensure that those clients are just as pleased when the singular moment arrives, and they open a bottle from their collections to savor alone or share with friends.

The management of a major wine collection can be a daunting task. Kevin Swersey of the Connoisseur’s Advisory Group in New York (212.983.4641) notes that many high-end collectors lack the time needed to catalog their cellars properly. In addition to acquisition and sales consulting, Swersey’s company provides cataloging services.

Computer software has made the process of inventorying extensive collections much easier and more efficient than in the days of unwieldy cellar books. Recognizing that his clients might want to take advantage of the available technology, Evan Goldenberg wires all of his cellars with CAT5 cable and computer docking stations.

Although it is possible to create your own cellar inventory in database programs such as Filemaker, dedicated cellar maintenance software such as Robert Parker’s Wine Advisor & Cellar Manager (www.erobertparker.com) and Wine Organizer Deluxe (www.primasoft.com) are out-of-the-box solutions. One of the most sophisticated of these programs is Cellar! (www.cellarwinesoftware.com), which wine collector Art Stratemeyer first designed and released in 1995 and has continually enhanced.