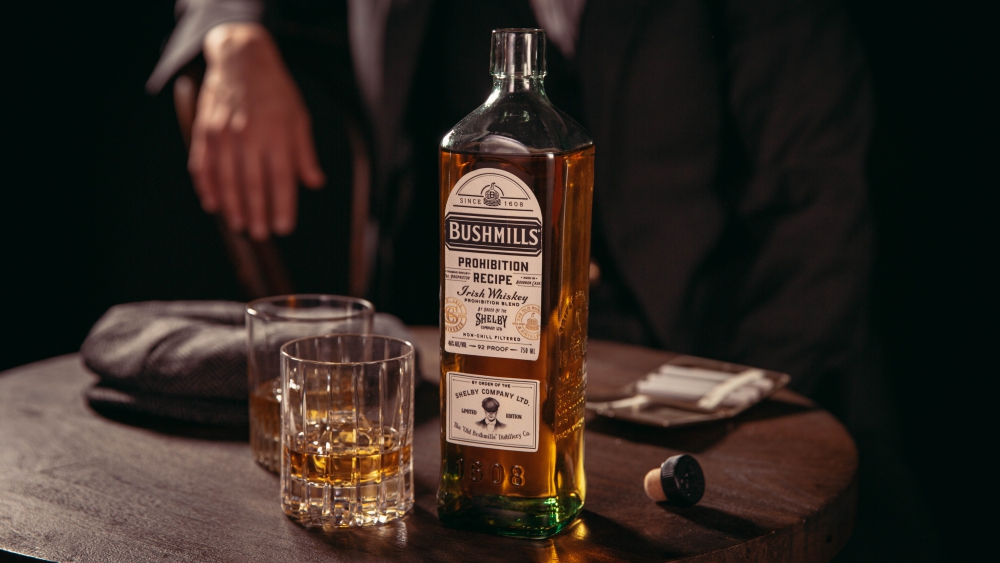 Not every TV show gets its own whiskey, even though there are some that seems like obvious choices—Mad Men Manhattans could have worked, and I wouldn’t say no to a Breaking Bad Bourbon. But Netflix’s Peaky Blinders is the subject at hand with a new whiskey tie-in from Northern Ireland, Bushmills Prohibition Recipe Irish Whiskey.

The lore runs deep here, with press materials claiming that the whiskey’s owner is Shelby Company Ltd., the fictional family business run by main character Tommy Shelby (played by Cillian Murphy). And though the series takes place in England, Bushmills was a logical choice to release whiskey (in conjunction with Caryn Mandabach Productions, Peaky Blinders’ brand owner and producer), given Shelby’s Irish roots. This whiskey is meant to transport fans of the show a century back in time to the era when you might be able to stop in at the Shelby family’s Garrison pub in Birmingham. The bottle design references the vintage Bushmills you can see in the pub onscreen, with the Shelby company name and portrait of Tommy on the label.

“With this new release, we celebrate Bushmills’ long history and the continued aging of whiskey during Prohibition,” said master distiller Colum Egan in a statement. Though Ireland hadn’t banned booze, the fallout from America’s 18th Amendment rippled around the globe. “As the world’s oldest licensed whiskey distillery and one of only a handful of distilleries to survive the 13 long years that preceded Repeal Day, this whiskey represents uncompromised quality and perseverance in the face of adversity—a story that is shared by both Bushmills and the Peaky Blinders.”

The whiskey in this throwback bottle was created by Egan and is meant to highlight production methods and flavors that were characteristic of Irish whiskey a century ago. This means that the liquid is non-chill filtered and bottled at a higher 92 proof, compared to the Original blend which is bottled at 80 proof. The whiskey is a blend of liquid aged separately for three, four and five years, with maturation taking place entirely in ex-bourbon barrels instead of the Original’s mix of sherry and bourbon casks. Tasting notes include rye bread, orange marmalade, citrus and vanilla bean.

You can find Bushmills Prohibition Recipe available to purchase online, and even if you’re not a fan of the show it would be interesting to taste the whiskey side-by-side with Bushmills Original to see how they compare. But be careful what you say, because in the words of the gangster Tommy Shelby: “Whiskey is good proofing water—it tells you who’s real and who isn’t.”