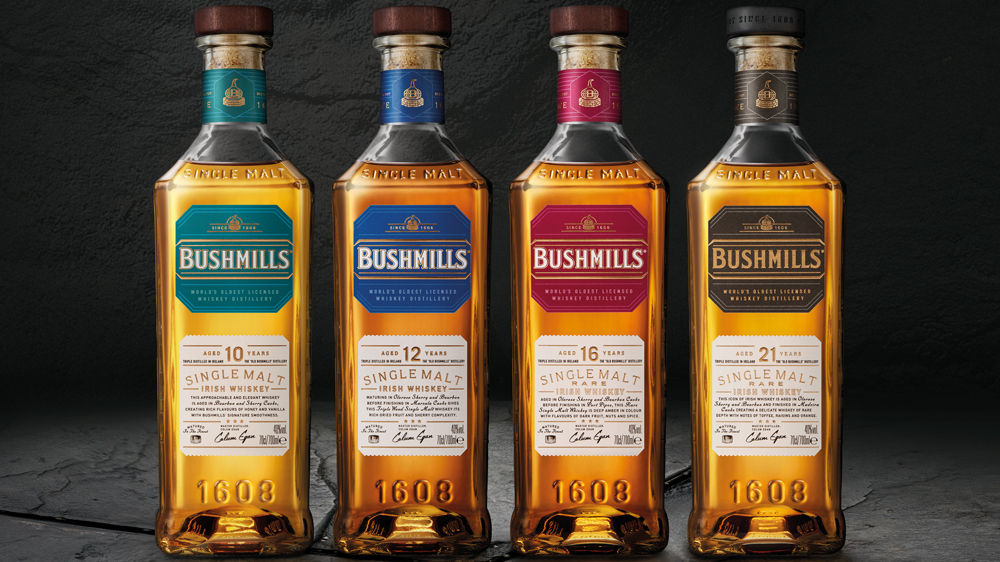 Even the most casual whiskey drinker is familiar with the term “single malt,” and likely associates this category of whisky with Scotland. There’s a good reason for this, given that scotch whisky generally dominates the single malt conversation and market. Names like Glenlivet, Laphroaig, Balvenie, Glenfiddich and The Macallan line the shelves of most liquor stores and bars, offering an array of styles and flavors. Of course, single malt is not the provenance of Scotland alone. In fact, one distillery that’s been at it for longer than most (or any, as it claims to be the “world’s oldest licensed distillery”) is Northern Ireland’s Old Bushmills Distillery.

Bushmills is located in the small town of the same name and has weathered the centuries in this far-flung corner of Northern Ireland, just a few hours from Belfast and the history of strife that defined the city for decades. Minutes from the distillery is the Giant’s Causeway, a series of rocky outcroppings that ease into the Atlantic, with massive waves sending up a consistent cloud of spray as they smash against the shore. The rugged natural beauty here offers a counterpoint to the refined flavors of the Bushmills single malt lineup of whiskeys, the results of both nature and human intervention. Bushmills has been making Irish single malt whiskey for centuries, although it’s best known for its affordable blends. It has survived a devastating fire in the late 1800s, Prohibition, world wars and, of course, the effects of the Troubles which plagued Northern Ireland. The malt whiskey produced here has always been a key component of the blends, but the distillery launched three standalone single malts in 1983: 10-, 16- and 21-year-old whiskeys. This winter, the distillery introduced a 12-year-old whiskey into the lineup, aged in bourbon and sherry barrels and finished in marsala casks. And the second release in its expensive Rare Casks collection arrives this March.

The woman currently in charge of one of the most important steps in the whiskey production process at Bushmills is Alex Thomas, the new master blender who took over for Helen Mulholland last fall. She started at the distillery in 2004 and fell in love with the maturation side of the process soon afterwards. She qualified as master distiller and blender in 2012 and launched The Sexton single malt whiskey in 2017. When I spoke to her at the distillery this past November, she was just a day or two into her new role and was still buzzing with emotion and passion when talking about the distillery and her work there.

Perhaps the key factor in Bushmills’ longevity is its continued focus on making single malt whiskey, an integral component of the blends and a style that proudly defines the distillery. “At Bushmills, we have been producing single malts since before the term ‘single malt’ was even coined,” said Thomas, “and they are a vital part of our brand and history.” But she recognizes the challenges of familiarizing the public with Irish single malt in a whiskey world in which scotch is often the focus. (If you really want to see some sparks fly, ask someone from Ireland and someone from Scotland which country invented whiskey, but that’s for another story.) “Our blends are the most popular in terms of sales, but we’re pushing our single malts,” Thomas said. “That’s what everybody here loves. We are a single malt distillery, we want to continue to grow that side of it. People will appreciate Irish whiskey from drinking a really good single malt. We need to get them out there to continue that growth.”

Besides the new releases, Bushmills is undergoing a major expansion with the opening of a brand-new distillery onsite. This will increase the capacity from five million to about 10 million liters per year, along with almost 30 new warehouses, to keep up with the current growing demand for Irish whiskey. Of course, that demand is mostly for blends like Bushmills Original, Black Bush and Red Bush. But the single malts remain front of mind for Thomas, both in terms of maintaining consistency with the core lineup and developing new expressions. “We want to keep tradition and learn from the past, but we also want to see what else we can do,” she said. “We’re in a wonderful position in that we have an awful lot of stock in the warehouses. There were a lot of years when the Bushmills owners didn’t want to see anything new coming out, but we still had the opportunity to lay down things you got to taste today. Bushmills will definitely be bringing out new rare whiskeys that represent the heritage of our past and optimism of the future.”

I got to try the second Rare Cask release while visiting the distillery and I liked it even better than the first. It’s a 1992 vintage aged for 29 years, initially in bourbon barrels for 12 years before being recasked in 2004 into Pedro Ximénez sherry casks for the remaining 17. Just 12 casks remained of this nearly 30 year old whiskey. The nose is full of raisin notes, with fig jam, leather and spice on the palate. This is a delicate and floral Irish single malt that is full of character. Others I was able to sample, which may or may not be released down the road, included a 1991 vintage PX cask, 1995 port cask, 1991 virgin oak and a really interesting and savory 2008 vintage aged in Jupille wine casks from France.

Even though Irish single malts can’t compare with Scotland as far as variety, given that there are just not as many distilleries in Ireland, the complexity and character of the category is second to none. It should be said that it’s difficult to even compare the two categories, as the core notes of the Irish single malt palate are so far removed from what you might expect from a scotch. While some of the older Irish malts are indeed expensive, they usually don’t come close to the astronomical prices that single malt scotch aged for several decades command.

It’s strange to think that after four centuries of Bushmills making whiskey, not to mention the many decades other distilleries have been at work in Ireland, the Irish single malt category isn’t more popular. That may change, or it may not—and if it’s the latter, that will just mean easier access to excellent bottles for those who appreciate the whiskey. For Thomas, however it plays out she sees her role as just one step in the long history of this Northern Ireland distillery. “Bushmills holds a very special place in the history of Irish single malt and the whiskey category as a whole, and it is a true privilege to be part of this legacy,” she said. “I’m a caretaker, I’m only here for a short time and someone will take on this brand after me… People will hopefully get to enjoy my inspirations in the years to come.”