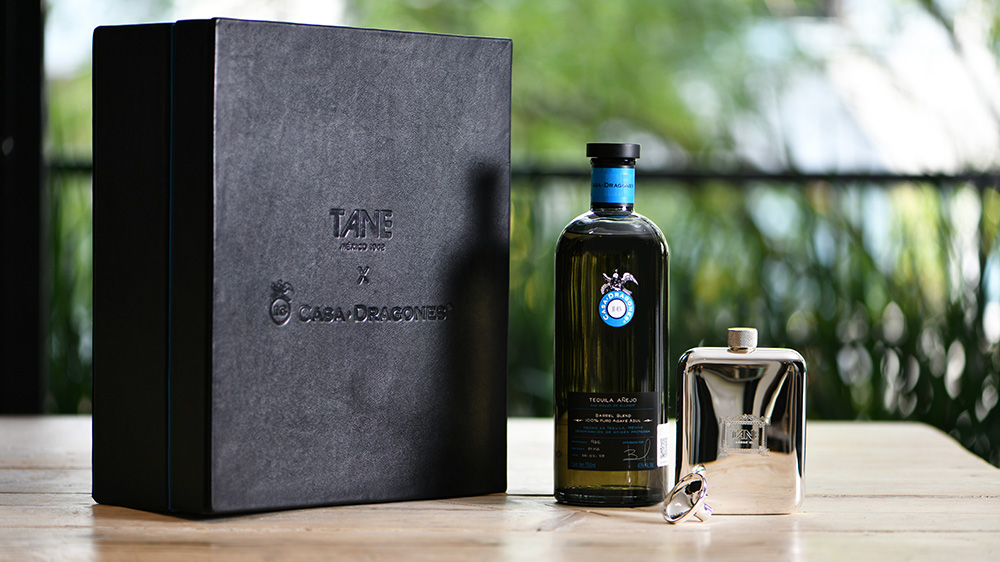 The sun is out and temperatures are rising, so what better times to get reacquainted with tequila, the ultimate warm weather spirit? And there may be no better way to do so this summer than an exclusive new set from Casa Dragones and Tane.

The two Mexican brands have just announced the limited-edition Ultimate Gentleman’s Gift Set. Consisting of a bottle of the small-batch tequila maker’s new Añejo Barrel Blend as well as a custom-made flask presented in a special black leather case, the luxurious spirit kit is set to go on sale this Monday.

The package is a great way of highlighting Casa Dragones’s newest expression. The Barrel Blend is a 100-percent blue agave añejo tequila meant for sipping. Aged in two barrels—one made of new French Oak, the other of new American Oak—the two styles are blended together at the end of aging, resulting in a uniquely smooth tequila with an agave-forward flavor profile. The blend comes in a 750ml glass bottle, which is signed and numbered with the corresponding batch number.

That bottle may be the centerpiece of the collection, but just as important is the accompanying flask, a stunning example of Mexican craftsmanship. Made of silver, it features the clean, geometric lines that have been a trademark of Tane’s work since its founding in 1942. The flask also comes with a matching funnel which makes filling up a breeze. The pair, plus the bottle, come stored in a black leather box with a suede-line interior accented with Casa Dragones blue.

“Mexico is the leading silver producer in the world and has a unique silver tradition that is at the heart of Tane’s craftsmanship,” Tane creative director Ricardo Domingo told Robb Report. “Tequila Casa Dragones is inspired by the legendary Dragones cavalry of San Miguel de Allende who sparked Mexico’s independence movement of 1810. During this time, San Miguel de Allende, situated in the center of Mexico, was at the heart of the silver trade in Mexico. This collaboration was inspired by the shared silver history of both Tane and Casa Dragones, and a shared commitment to excellence and Mexican craftsmanship.”

Previously only available in Mexico, 15 of the Ultimate Gentleman’s Gift Sets will be available to buy through Wally’s Wine & Spirits this coming Monday, May 24, for $3,400. The set is the ideal gift for the tequila-loving gentleman in your life. And with Father’s Day just around the corner, the timing couldn’t be better.