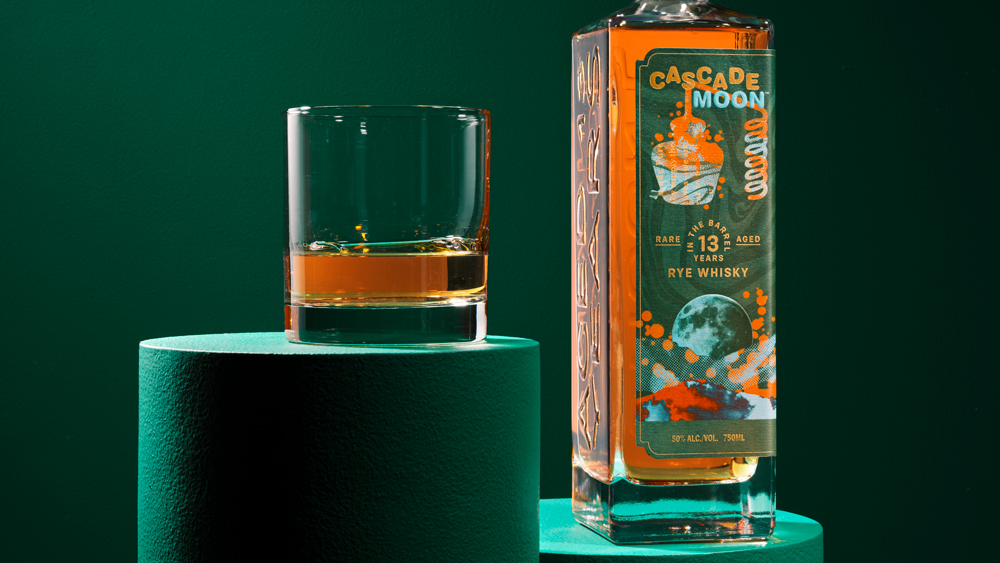 The last decade has seen big, brawny ryes like WhistlePig dominate the category. So when a whiskey comes in and challenges the paradigm, it’s hard not to take notice. That’s the case with the comparatively bright and nuanced Cascade Moon 13 Year Old Rye Whisky, the third edition of the Cascade Hollow Distilling Co.’s limited-edition, one-off whiskey series. It’s a bottle that challenges the conceptions of what an aged rye is supposed to taste like.

George Dickel Tennessee Whisky has been made at the Cascade Hollow Distillery in Tullahoma since 1958, but the history of the distillery goes all the way back to 1878, when George Dickel himself started distilling there (it was rebuilt in the 1950s). Cascade Hollow’s current general manager and distiller, Nicole Austin, wanted to reflect a little of that history—and to go outside the lines of what Dickel is known for—with the Cascade Moon series. As Austin says, “This particular batch defied expectations for a rye whisky of this age.”

Like Dickel’s own rye, Cascade Moon was distilled at the MGP distillery in Indiana, the biggest rye whiskey producer in the country, and it has the classic MGP 95 percent rye and 5 percent malted barley mashbill. The difference is in the aging process, both in length of time and location. Dickel rye has no age statement, but it’s said to have been in the barrel for about five years, all of them in Indiana. Cascade Moon is not just significantly older, but it’s also spent nine of its 13 years aging at Cascade Hollow, whose single-story warehouses age whiskey very differently than the multi-story warehouses at MGP and other distilleries. “Our maturation conditions are very temperate,” Austin says, “a lot more like the Scotch whisky style maturation conditions.”

The aging conditions, along with the charcoal filtration common to Tennessee whiskeys (known as the Lincoln County Process) results in what Austin calls a “less barrel-forward, much more balanced liquid that still maintains some of those fresher bright fruit notes that typically, in a whiskey of that age statement, I wouldn’t expect to see.” Peach and apricot aromas dominate the nose, while the palate showcases notes of clove, vanilla, hints of tropical fruit and eucalyptus. The black pepper spice that typically shows up in rye is replaced here with a gentler cinnamon spice. It’s a whiskey that lives up to Cascade Moon’s slogan, “Mellow as Moonlight.”

Who decided to age a small batch of rye (the exact number of barrels isn’t being disclosed by Cascade Hollow’s parent company, Diageo) in Tennessee instead of Indiana is a mystery—it had been in the warehouse for six years by the time Austin signed on in 2018. “Normally, none of that rye even touches the site,” Austin says. “So 10 years ago, someone got the idea that they should send the MGP rye to Tullahoma. I don’t know who inspired that, but I’d like to go back and thank them.” She also doesn’t know why the decision was made. “I’d love to imagine it was some kind of desire for an experiment to compare how different our maturation conditions are,” she says. “But it also could have easily been something much more mundane, like they were incorrect with a shipment or something—‘I don’t know, let’s stick it in the warehouse.’”

The 13-year-old rye is a change of pace from the first two Cascade Moon releases, both of which were blends of whiskeys of different provenance and age. Austin maintains that there’s no overarching theme to Cascade Moon. Rather, it’s a chance for her to poke around the warehouses’ voluminous holdings and find interesting barrels worthy of bottling, regardless of quantity or style. “The distillery, where Dickel is made, they never just had Dickel,” she notes. “They used to have another brand called Cascade Pure Whiskey before Prohibition, and it’s interesting to me that this distillery is capable of doing more things and having a bigger portfolio. To me that was very freeing.”

While she foresees new Cascade Moon bottlings coming out on a regular basis, she refuses to stick to a preset schedule, maintaining that she’ll only release what she finds noteworthy, whenever she discovers it. “Hopefully people find comfort that I’m truly letting the liquid lead when things get done, versus trying to force something into a planned cadence,” The oldest whiskey distilled by Austin herself is still only three years old, but she imagines that some of it will eventually wind up in Cascade Moon releases. In the meantime, the 13-year-old rye is available at select retailers until supply runs out.