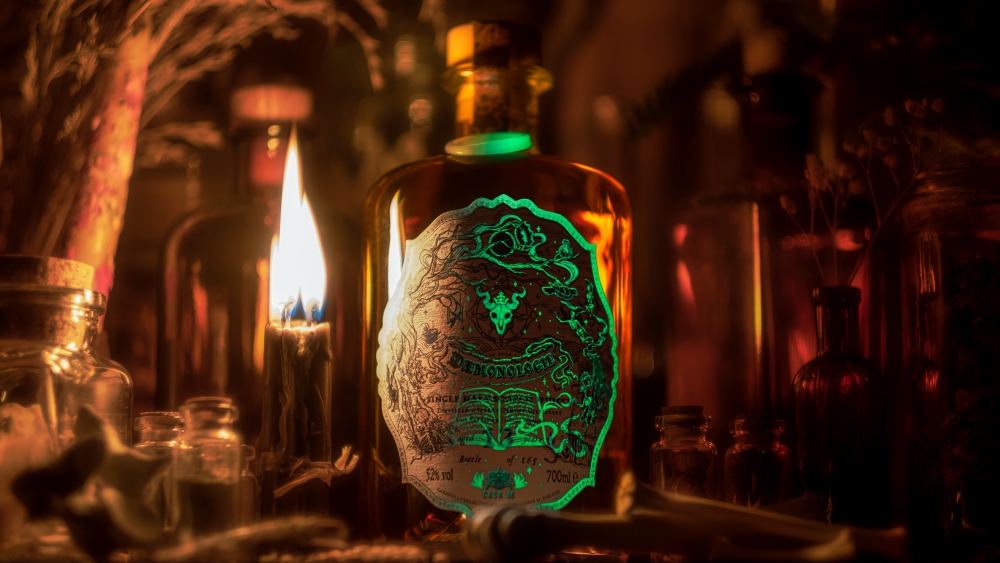 This Halloween you won’t need a Ouija board to have a personal experience with a spirit, because Cask 88 has a new witchcraft-themed single malt scotch whisky available to order online. The second release in the Scottish Witchcraft Series is called The Book of Daemonlogie, and this limited-edition bottle even glows in the dark.

Cask 88 is an independent bottler and cask broker that allows consumers to find rare and unique whisky expressions from well-known scotch distilleries. The Book of Daemonlogy sounds ominous, but never fear, the whisky inside is very drinkable. It’s a single-cask 13-year-old single malt from an unnamed Orkney distillery (likely suspect is Highland Park, but this is unconfirmed) that is bottled at 52 percent ABV. There are just 165 bottles available for purchase, each with a glow-in-the-dark label designed by illustrator Hannah Sneddon. “The design for this bottle references one of the most gruesome chapters of our history, the Scottish Witch Trials,” said Cask 88 bottling projects manager, Seoyoung Kang, in a statement. “It is a dark but fascinating glimpse into the mind of a paranoid king obsessed with conspiracy.”

The label features a drawing that was inspired by the Book of Daemonologie written by King James VI in 1597, an account of supernatural activity that was compiled by essentially torturing people who were accused of witchcraft into giving false confessions—sort of the British version of our own Salem Witch Trials. “As horrible as this time period is, we feel that this dark time in Scotland’s past would be too dangerous to forget,” said Kang. “Adorning an apothecary bottle that wouldn’t look out of place among a shelf of potion jars is a diorama of monsters, succubi, fairies, familiars, shapeshifters and magic charms. Obscured by the darkness, you may find yourself seeing things that aren’t really there at all…”

The Book of Daemonlogie was distilled on May 26, 2009 and bottled this September. The whisky was finished in an Oloroso sherry hogshead giving it a “blood moon” color, according to the Cask 88 tasting notes. There are berries and mango on the palate, followed by some herbal tea flavors and a bit of smokiness. If you want to snag a bottle to enjoy this Halloween, you can order one here—but act fast because the delivery time can take anywhere between three to 10 days.