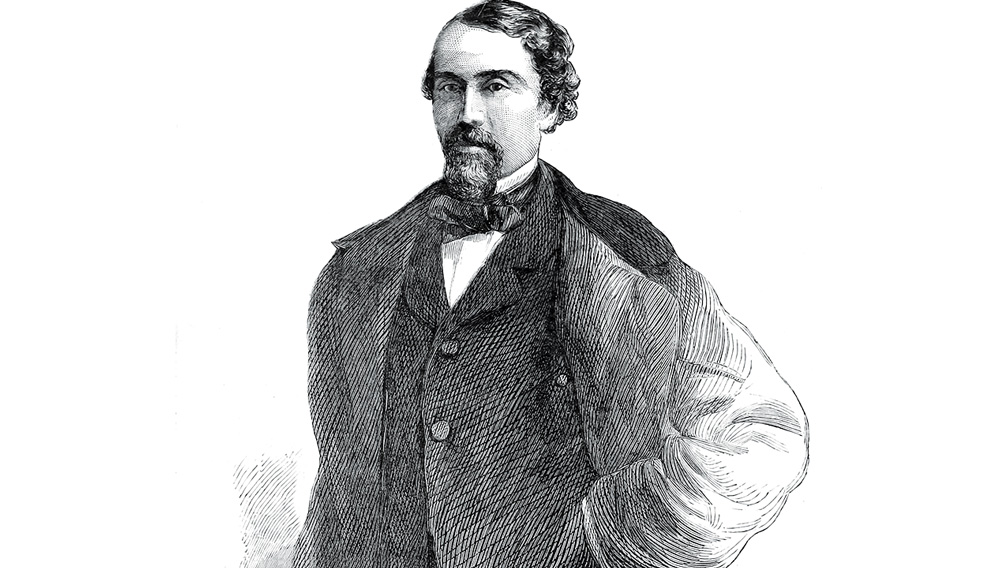 The most rewarding journeys are very often the unexpected ones. But no such cheerful sentiments brightened the thoughts of one traveler who crossed the Atlantic from France in 1861. A native of Reims, this anxious gentleman had hurriedly packed his bags and departed his hometown on an altogether unanticipated expedition to the suddenly war-torn United States, where only a decade before he had minted his fortune with so much ease.

Living well had been a profitable venture for this bon vivant. Born in 1822, Charles Camille Heidsieck (pictured) belonged to a family prominent in the annals of winemaking. His great-uncle Florens-Louis Heidsieck, a German Protes­tant who immigrated to France, established Heidsieck & Co. in Champagne in 1785 and recruited his nephew, Charles-Henri (Charles Camille’s father), to assist him in expanding the firm. The younger man performed with aplomb: In advance of the French invasion of Russia in 1812, this intrepid tradesman made his own foray into Moscow, armed with cases of sparkling wine to sell to whichever army had cause to celebrate when the smoke of battle cleared. Charles-Henri duly initiated his son into the mysteries of the cellar, and the bold and ambitious Charles Camille, determined to produce a wine in his own style bearing his own name, in 1851, at the age of 29, formed an independent label, Charles Heidsieck (see “Tour de Blancs” and “Good-Bye Charlie,” page 60). His innate sense of adventure—and the pressing need for fresh thirsts to quench—drew him to the New World the following year.

An accomplished sportsman with a developed taste for the finer things, Charles Camille shrewdly recognized on his arrival in New York City that the best way to sell wine in this comparatively coarse country was to sell a lifestyle. To this end, he organized extravagant hunting parties and splendid receptions, during which—between volleys of gunfire and gossip—the Champagne always flowed freely. New York and Boston society embraced this charming host, and the newspapers, delighted by his profligate entertainments, dubbed him “Champagne Charlie.” His fame soon spread from New England to New Orleans, where—to the great satisfaction and remuneration of the man now known simply as Charlie—the free-spending citizenry ate and drank with abandon. As American glasses filled with his Brut, Charlie’s ledgers brimmed with black ink:  Within a decade, the mannerly merchant had hired a full-time import agent in New York and sold hundreds of thousands of bottles per year.

The proprietor of Charles Heidsieck, however, savored this prosperity only briefly. His representative in the United States kept the Champagne pipeline primed by furnishing credit, and the escalating conflict between the government in Washington, D.C., and the recently formed Confederacy placed accounts representing much of his wealth in jeopardy. On reaching New York in 1861, Charlie realized his worst fears: His unscrupulous agent informed him that their Southern clients had defaulted on their payments. The Frenchman, desperate to save his firm, undertook a hazardous excursion through Union lines into Louisiana, where he learned to his dismay that his once-wealthy customers were broke. One debtor offered him a warehouse of cotton as payment, but this cargo fell prey to a Union blockade when Charlie attempted to ship it to Europe from Mobile, Ala.

The hapless businessman returned to New Orleans, hoping to sail for his home country; his hopes were dashed, however, when he discovered that the city was occupied by the Union’s General Benjamin F. Butler, who promptly arrested and imprisoned him. “I should have tried him as a spy, and hanged him upon conviction as a spy,” Butler later declared, but Charlie’s fame became his salvation: Communiqués between Paris and Washington eventually restored his freedom, if not his fortune. Charlie’s unexpected journey had brought him no tangible reward, and back in Reims, his firm sank into bankruptcy. Yet in 1863, the astonishing voyage of another individual, a U.S. missionary, gave Champagne Charlie cause to toast. The visitor carried a packet of deeds from the brother of Charles Heidsieck’s erstwhile U.S. agent granting the ruined winemaker title to a third of the land in Denver, Colo., where Champagne corks soon popped as silver mining and the Transcontinental Railroad transformed that outpost into one of the wealthiest boomtowns in North America.