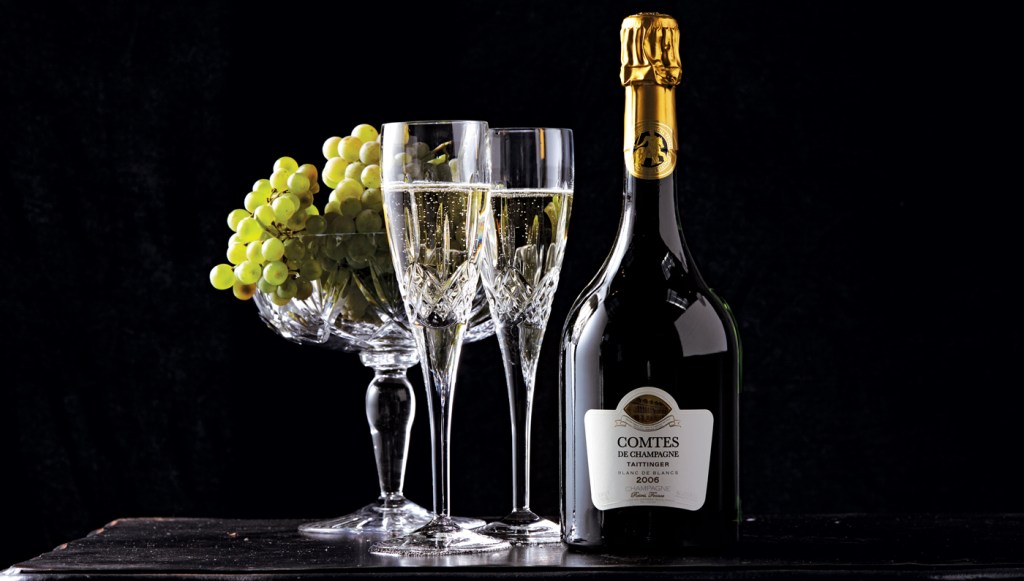 The 2006 Comtes de Champagne Blanc de Blancs is “an all-Chardonnay cuvée, in the style our ancestors created,” says Taittinger

The Champagne-house heir and classically trained artist reflects on risk and conviction.

The business of making fine wine is inherently risky. There is the unpredictability of weather to consider, of course, but for the most creative winemakers, much of the risk lies in deviating from accepted tastes and traditions. For Vitalie Taittinger, heir to and global ambassador for one of France’s great Champagne houses, such risk-taking is sown into the soil of her family’s estate in Reims. Champagne Taittinger pioneered the blanc de blancs style in the 1940s, and today it is one of the last family-owned houses in the Champagne region. The operation is an enormous one, producing about 6 million bottles each year from nearly 712 acres of vines. Taittinger, a former professional illustrator, spoke with Robb Report about bringing her own brand of creativity—and a little craziness—to the classic Champagne house.

What prompted your ancestors to take that first big risk?

At the beginning, my great-grandfather Pierre Taittinger had this vision for the Champagne, which was then usually made with Pinot Noir and Pinot Meunier. He thought the wine should be light, feminine to pair with food. That drinking it should be a conversation between a man and a woman—both have to work together with neither talking more than the other. The wine not overpowering the food, the food not talking over the wine. He added Chardonnay to the blend of wines in Champagne to achieve this lightness. It was a risk for the family then, but it had the conviction of the family behind it. That conviction made the brand’s identity.

Your family sold the business in 2005 to Starwood. How did your father come to buy it back?

Taittinger was a grand brand for the French at one point. Very recognizable. It was a hotel, a restaurant brand, not just wine, because our family was so big. When the family decided to sell the group, my father was so sad—it was the work of his life, and there was a bit of shame to letting it go for money. But he succeeded in buying it back in 2006, and we are lucky to be able to revitalize a brand. Our 2006 Comtes de Champagne Blanc de Blancs is a celebration of all of that—it is an all-Chardonnay cuvée, in the style our ancestors created, but it is also the year my father took over ownership. Now we are a team of three family members, so in making decisions we can move faster, be a little crazy, and do more. And it’s better to have to earn it sometimes rather than just inherit it. You work harder to deserve it.

In what ways are you being “a little crazy”?

We have been taking some parcels in an organic or a biodynamic direction. We can try it and see if it works. It’s a risk because Champagne is the most humid wine region in France, so it is difficult to go sustainable and organic; there is a real threat of mildew. It is also hard to be sustainable with such a vast property. But we make such decisions with the heart. It’s a bigger risk to do something without believing in it. You have to believe. We’d like to go as organic as possible, be the most responsible we can be. But we need the investment of the people who work with us. It’s more of a physical burden for them this way, but it is a huge tribute that they are willing to do it and are doing such a great job. They take the pain on their shoulders.

You trained and worked as an artist. Did you always plan to change careers and join the winemaking business?

At the beginning I wasn’t supposed to join the family business. My goal, and my parents’ wish for me, was to be happy. My grandmother and great-grandmother were artists, so I became familiar with art as a child. I gained a technical background for painting and drawing at school and then spent 6 years as an illustrator. When my father succeeded in buying the business back, I decided my career as an artist was less important, and wanted to follow him because he did it for the family. I recognized it was part of his identity, but also my own. I’ve never regretted that decision, and we get to spend a lot of time together.

Do you continue to pursue art?

I still draw, but mostly in meetings! One day I will get back to it. But I continue to be involved in art and work with the artists who are part of our Taittinger Collection series. It was my great-uncle’s inspiration to ask artists to create something and then print a wrap to put around a bottle. I have participated in two so far, most recently our 2008 Millésimé, designed by Brazilian photographer Sebastião Salgado, which features a black-and-white, silvery image of a leopard photographed in Damaraland in Namibia. It’s a haunting image of power and beauty. I’m now looking for the next artist.

Are you a collector of art?

I do regularly buy art, mostly from French artists. Recently I have become interested in the work of Alfred Courmes and Simon Hantaï. What I love to have on my wall are things with some mystery, that speak to me personally. Not purely representational art, but rather an image where behind it there is something more. I love when the work is not crying, it’s just chatting a bit. It’s not obvious. There are many ways to do something very beautiful. For me, I like when it’s a little bit harsh, when there is a dissonance.

What are your earliest memories of being part of a grand Champagne tradition?

When I was a child, it was rare for me to be in the Champagne house, so my earliest memories are of the harvests, going to the press house and tasting the juice. The smells, the impression of syrup as the juice stuck to the soil. I also recall when my father and my mother would have a dinner party, and I would sniff the glasses afterward. With the wine all warm, the scent was like a beautiful perfume.

What about the 2016 harvest—what can we expect from it?

It was a complicated year. We were worried. There was an early frost at the start of harvest. We also had a terrible cull early on, the humidity brought on mildew, and then very warm weather burned some of the grapes. We lost 5 hectares because of the weather. It was exceptional to see all of those extremes in one year. It yielded a small harvest, but also a very special one. We will make an appellation wine from it.