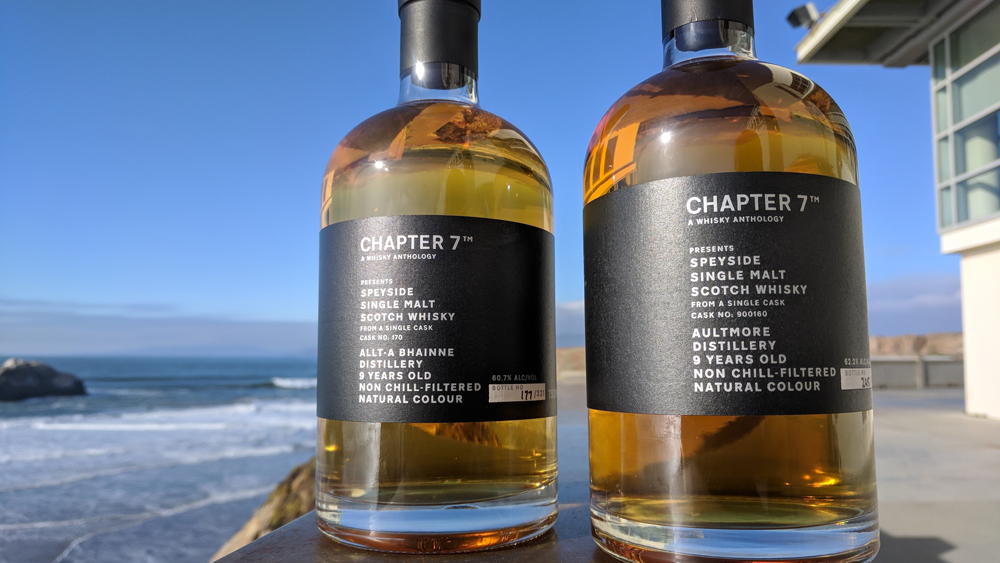 Since its inception in 2014, Swiss-based independent bottler Chapter 7 has amassed an impressive collection of unsung Scotch and Irish whiskies. While its true owner, Selim Evin, hasn’t lifted a finger to produce a single drop of fine brown liquor, he’s certainly proved adept at tracking down the good stuff. Evin credits his Scottish grandfather’s passion for whiskey as his main inspiration for launching Chapter 7 and has done his granddad proud with a portfolio that includes heretofore impossible-to-get whiskies from obscure/extinct distilleries such as Miltonduff, Tormore, and Cambus. Chapter 7 recently added two new “What’s that?” whiskies to the mix: Allt-a Bhainne 9 Years Old ($65) and Aultmore 9 Years Old ($70).

Located on the outskirts of Dufftown in Speyside, Allt-a Bhainne (pronounced “olt-er-vane”) was built by Seagram in 1975 for the primary purpose of supplying whiskey for its Chivas Brothers blends. A glut of supply led Chivas Brothers’ current owner, Pernod Ricard, to close the distillery in 2002, only to reopen it in 2005 because of a resurgence of interest in the brand. This independent bottling of Allt-a Bhainne 9 Years Old comes from a single cask filled in 2008, which yielded 321 bottles last April at a cask strength of about 120 proof. At such high proof, this is not a whiskey to mess with on its own. Cut it with a few drops of water, though, and it opens up, revealing light red berry and vanilla flavors, along with some salty, savory notes that add complexity. It finishes fast, with a fair degree of heat.

Aultmore is another Speyside distillery primarily used to supply a well-known blend—in this case Dewars. Aultmore was founded in 1896, and over the past century-plus, it has gone in and out of business a handful of times. Chapter 7’s special 9 Years Old bottling weighs in at a hefty 124 proof. It carries the weight well, striking a fine balance between sweetness and spice, with minimal alcohol burn. It boasts a creamy mouthfeel and a smoky finish that lingers and invites further exploration.