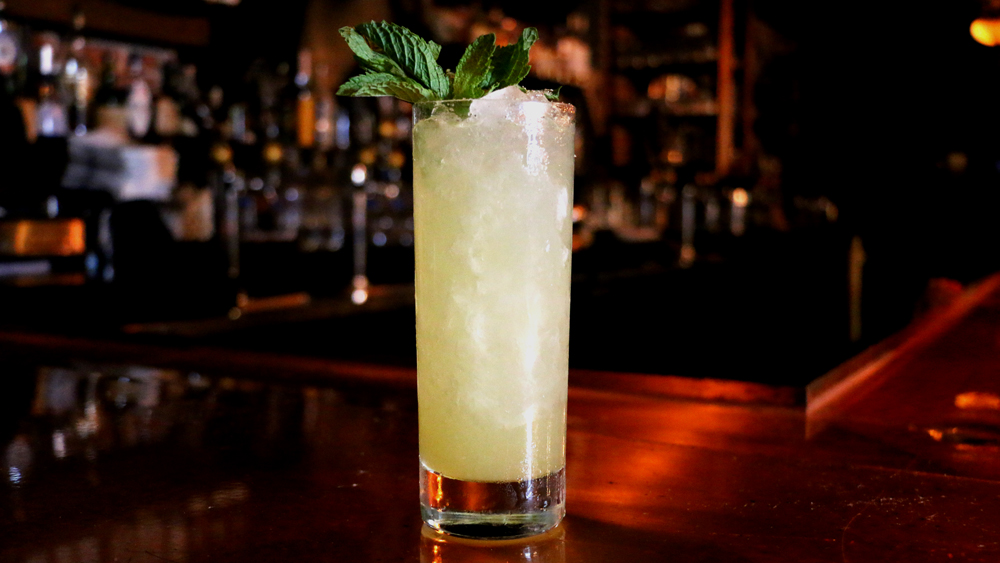 Sometimes great ideas are too early for their time. Arrested Development, one of the greatest TV comedies ever, debuted in 2003 and was cancelled in 2006. Leonard Cohen wrote the song “Hallelujah” in 1984, but it took 10 years and two covers for pretty much anyone to hear it. The British physicist Sir Roger Penrose won a Nobel Prize in October of last year for work that he did in 1965, a breezy 55 years earlier.

So it is with the Chartreuse Swizzle. If there were a Nobel Prize for cocktails, Marcovaldo Dionysis would win one for this. As a drink, it’s novel to the point of being avant-garde, yet brilliant in its simplicity. Some delicious cocktails are obvious—anyone can add strawberries to a Daiquiri or sub mezcal into a Negroni—but to take a 110 proof liqueur, made by a silent order of French monks from 132 different ingredients, and not only use it as the base spirit of a drink (already a crazy choice) and to spin that drink in a tropical direction (again, crazy), but to take something that unusual and turn it one of the most viscerally delicious cocktails in the pantheon of modern classics is worth a trip to Stockholm, to say the least. It’s way better than discovering an element. What has Einsteinium ever done for you?

Dionysis invented the drink in 2003 for a competition (which it won, and him a mountain bike in the process). He put it on his menus and it sold well enough, but it would be a bit of a journey to become the internationally famous cocktail it is today. The story goes like this: In 2008, he was tapped to be the opening bar manager of Clock Bar in San Francisco, part of celebrity chef Michael Mina’s restaurant group. Space was limited and some bottles needed to be cut from the back bar, and he decided he could get away with not carrying Grey Goose. He probably figured it wouldn’t matter too much. He wasn’t sold on the brand, and besides—this was the Bay Area in the late 2000s, the West Coast epicenter of the cocktail boom—who even drank Grey Goose anymore?

Opening night, and Michael Mina himself comes to the bar. Mina asks Dionysis how he’s doing. He says everything’s going great.  “Can I get you a drink?” Dionysis asks. “Sure, thanks,” Mina replies, “I’ll have a Grey Goose on the rocks.”

As it turns out, Grey Goose was Michael Mina’s go-to drink. Not terribly eager to get into a conversation with the boss’s boss’s boss about why he doesn’t carry the man’s favorite spirit, Dionysis pivots. “Michael,” he says, pointing at the list, “Can I—have you tried our cocktails? Let me make you a cocktail.” He makes a Chartreuse Swizzle (pretty much the polar opposite of a vodka rocks, mind you) and gives it to Mina. Mina takes a sip. He loves it. He gives it to the wine director, legendary sommelier Raj Parr, who also loves it. They give it to the corporate beverage manager, and he loves it. Soon after, the Chartreuse Swizzle starts getting featured at several Mina restaurants all over the country. Then it goes international, showing up on cocktail menus in places like Bangkok and Tel Aviv. By 2016, thirteen years after its invention, it finally earned write-ups in most all of the major drinks publications, and today, many if not most cocktail bartenders can make you one from memory.

The Cartusian monks, inventing Chartreuse in the snowy French Alps in 1737, had probably never even seen a pineapple, but nevertheless, pineapple juice and Chartreuse go fabulously together. The liqueur is sweet, despite its considerable strength, so adding lime is a natural choice, but it’s the Velvet Falernum that’s the genius move. Falernum is a liqueur from Barbados flavored with lime, almond and clove, and, as Dionysis points out, it’s the clove note “that helps to kind of pull the spices and herbs of the Chartreuse in a specific direction, making it a little bit more tropical.”

In hindsight, it seems pre-ordained that the Chartreuse Swizzle would become a modern classic. It was perhaps early for its time, but thankfully, it’s just right for ours.

Add ingredients to a tall glass. Add half full with crushed ice and stir or “swizzle,” which is to just agitate back and forth like a washing machine. Swizzle for about 7 to 10 seconds, until the glass starts to frost up, then top with more crushed ice. Garnish with a mint sprig and a grind of fresh nutmeg.

Green Chartreuse: Not only is Chartreuse an insane base spirit for a cocktail because of all the reasons I mentioned, but it’s also expensive—a bottle will run a bit north of $50 in most markets. All I can say about that is that it should probably cost more. It really is made by Cartusian Monks in the mountains of France, and there really are 130 ingredients. It is, in my humble opinion, the best liqueur ever made. There are no substitutes.

The only other thing to note is that there is another Chartreuse on the shelf, “Yellow” Chartreuse, which has (obviously) a more yellow color, a yellow label, and is either 80 or 86 proof, depending on when it was bottled. It’s delicious, but for this drink, you need the Green, which is (again obviously) greener and bottled at 110 proof.

Velvet Falernum: Falernum is a bigger shape-shifter than most liqueurs, in that different brands will differ wildly. Some are sweet, some are tart, some are N/A and therefore aren’t even liqueurs. You can also make your own if you have a mind to, and it’s not terribly difficult, but if it were me, I’d buy it—you’ll never use a ton of it, and if you make your own syrup you’ll probably end up throwing a bunch away in a week or two. As for brands, get the John D. Taylor Velvet Falernum, from Barbados. It’s what Dionysis uses and it’s not expensive.

Pineapple Juice: I’ve mentioned for other pineapple-heavy Tiki drinks that it’s not vital that you use fresh pineapple, and that the canned stuff, while it isn’t as good, technically works. I suppose that’s still true, but if there were any drink that demanded fresh pineapple juice, it would be the Chartreuse Swizzle. The Pina Colada and the Painkiller have coconut cream to distract the palate; here, there’s nowhere to hide. You need the brightness of fresh juice to make this drink its best self.

Lime Juice: needs to be fresh. As with the pineapple, brightness is important.

Crushed Ice: a “swizzle,” as a category, demands crushed ice, which adds extra dilution and keeps the drink icy cold ’til the last sip. It isn’t strictly speaking necessary—you can use regular ice and either shake (it’ll foam the pineapple juice and thin out the texture, which isn’t the way the drink is designed, but it’s not like it won’t taste good) or just add about a half ounce of extra ice-cold water. But you really should just crush some ice. Pulse some in a food processor or blender, or wrap some freezer cubes in a clean dish towel and hit it with something hard. If you prefer to buy, it’s available at ice companies, and they also sell bags at Sonic restaurants.