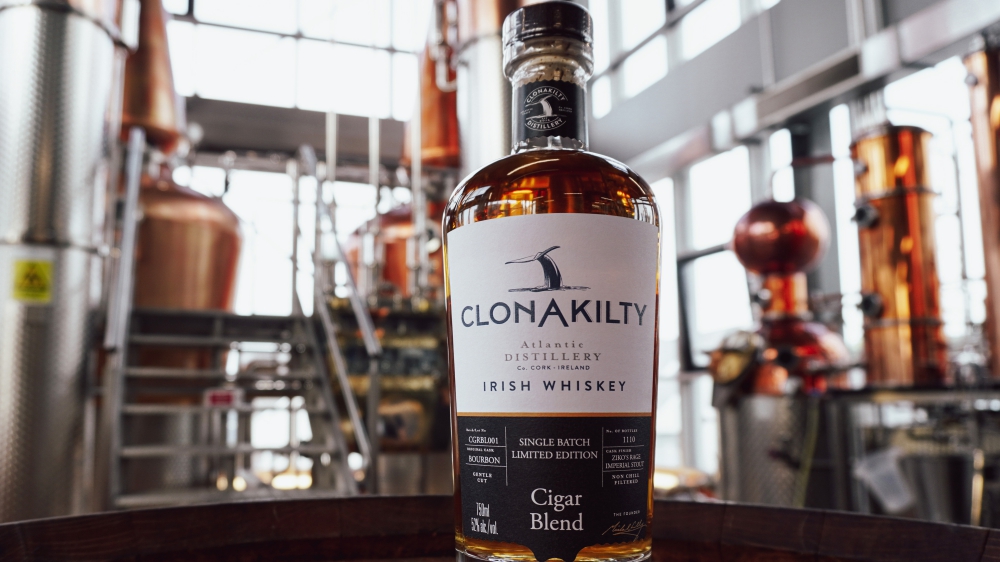 Let me start out by saying I’m not a cigar guy at all—on the contrary, I find them kind of disgusting. So when I got the chance to try this new Cigar Blend from Irish whiskey brand Clonakilty, I had some reservations. But the whiskey itself is actually quite good, and thankfully tastes nothing like a smoldering stogie.

It turns out that’s not even the point here. Instead, this whiskey was created to pair well with a cigar, which thankfully means you don’t have to smoke one while sipping. According to the brand, extensive research was done to find a flavor combination that would complement the notes that cigar smokers enjoy while puffing away. So what this distillery, located in County Cork (also the home of Midleton, the giant that makes Jameson and Redbreast), did was to create a special blend of double-distilled malt whiskey (see, not all Irish whiskey is triple distilled) and 10-year-old grain whiskey aged in ex-bourbon barrels. This was then given a secondary maturation period in “Ziko’s Rage” imperial stout barrels from South Florida’s 26 Degree Brewing, which the distillery christens “the spiritual home of cigar smoking in the USA.”

This isn’t the first time the distillery has collaborated with an American brewery, as it has at least five other special releases that are finished in beer barrels (Clonakilty and 26 Degree collaborated previously in 2020 on the IPA1A finish whiskey), but this is the first one with cigar smokers in mind. The whiskey was not actually distilled onsite, as the distillery only began production a few years ago, so this is sourced liquid—as common a practice in Ireland as it is here in the US. And it’s a pretty interesting sipping experience, with different types of chocolate shining through as the predominant note, no doubt from those imperial stout barrels. On the nose, there’s ripe fruit, espresso and, yes, chocolate. The palate opens with rich dark chocolate notes, followed by malted chocolate, milk chocolate, some hops, cherry syrup and a little bit of grapefruit and vanilla. The finish is smooth, even at 52 percent ABV, which was calculated by the distilling team to be high enough to cut through cigar notes without overpowering.

This is obviously an Irish whiskey that cigar smokers should consider, but don’t be put off by the name even if that’s not your thing. I could see this whiskey pairing just as well with cheese or chocolate or salami or just a quiet evening. And that’s really the best indicator of quality.