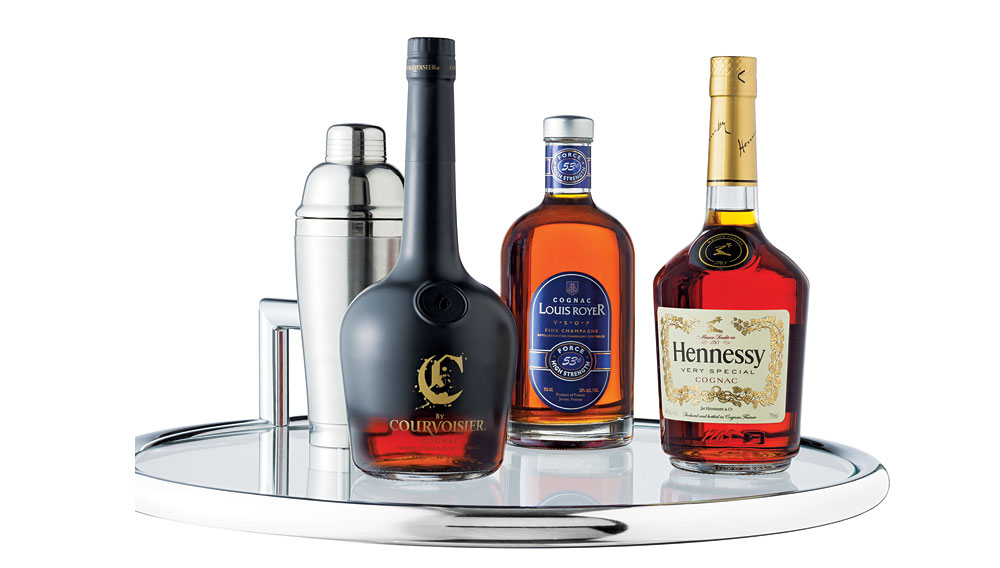 The simple but balanced sidecar, perhaps the best-known Cognac-based libation, is widely believed to have originated in early 20th-century Paris, at either Harry’s New York Bar or the Ritz Paris. Nearly a century later, gifted mixologists such as Josh Davis of Chicago are crafting exquisite modifications of the archetypal recipe. Davis’s Spoken Word combines bright fruit flavors with small-batch, double-barreled Cognac to spectacular effect. To make it, Davis shakes six parts C by Courvoisier with three parts DeKuyper Triple Sec, two parts maraschino liqueur, two parts fresh lemon juice, and two dashes of Angostura bitters. He pours the chilled mixture over fresh ice in a collins glass, tops it with club soda, and garnishes it with lemon peel.

The word Cognac evokes images of an amber spirit served neat in a snifter, grand in its pure form. But long before the arrival of the cosmopolitan, margarita, or mojito, Cognac served as the base for many of the world’s most popular mixed drinks. During the current cocktail renaissance, mixologists have rediscovered the versatility of Cognac and are using it to concoct new variations on the sidecar and other classics.

New York–based mixologist Orson Salicetti’s Saffron Sidecar is another tantalizing twist on the original. It calls for 2 ounces of 106-proof Louis Royer Force 53 VSOP Cognac (whose high proof helps the Cognac’s flavors hold up against other ingredients), 1 ounce of Combier orange liqueur, ½ ounce of lemon juice, ¼ ounce of port wine, and a few dashes of Salicetti’s saffron elixir, which is saffron-infused Cognac reduced for a few hours over low heat. The ingredients are shaken with ice, strained into a coupe, and garnished with orange zest.

Like the sidecar, the effervescent French 75 is a standard that Harry’s New York Bar often receives credit for introducing. Whatever its origin, the French 75, which first appeared around 1915, is the source for several exciting modern variants, including the Rémy Martin Reviver. Perhaps best suited to a spring cocktail menu, the Reviver calls for 1½ ounces of Rémy Martin V.S.O.P, ¾ ounce of fresh lemon juice, and ¾ ounce of fresh strawberry simple syrup. The ingredients are shaken with ice, strained into an ice-filled highball glass, topped with 3 ounces of Piper-Heidsieck Brut Champagne, and garnished with a sliced strawberry.

The elegant Vieux Carré was created not in France, but in the French Quarter, in New Orleans’s famed Hotel Monteleone in the 1930s. In Hennessy’s version—a close cousin of the original—¾ ounce of Hennessy V.S, ¾ ounce of rye whiskey, ¾ ounce of sweet vermouth, a splash of Bénédictine, and a dash each of Angostura and Peychaud’s bitters are stirred in an ice-filled mixing glass until chilled. The contents are then strained into a coupe and garnished with a cherry and a lemon twist. The cocktail’s complex, well-balanced character would please palates in any era.