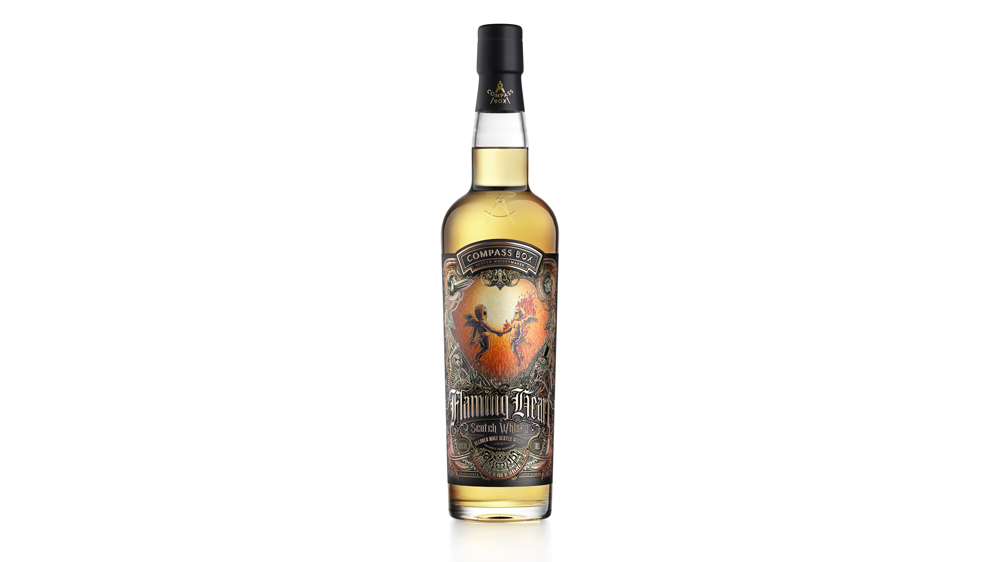 If you consider yourself to be strictly a single malt scotch drinker, perhaps you just haven’t tried any decent blends yet. A good place to get acquainted with the category is via independent bottler and producer Compass Box, which is launching two new high-end blends made using some of the finest malt whiskies out there, and can give any single malt a run for its money.

The first of this duo of whiskies is called Flaming Heart, the latest in a series that is named after a song by singer-songwriter (and one half of She & Him with Zooey Deschanel), M. Ward. The 2022 release is the seventh edition of this whisky, bottled at 48.9 percent ABV, non-chill filtered and no color added. According to Compass Box, the liquid is an interplay between a Highland malt aged in toasted French oak for five years and peat derived from malts from Laphroaig, Caol Ila and Talisker. According to the lead whiskymaker for this release, James Saxon, the flames aren’t just in the name. “Oak, smoke and fire reunite once again, fusing pyrotechnics with deliciousness,” he said in a statement. “As well as being the fruitiest Flaming Heart of recent years, we have brought in special remnant stocks of past releases for layers upon layers of smoke and French oak influence.”

The other new blend from Compass Box is called Ultramarine, part of a new series known as Extinct Blends Quartet. This expression is bottled at 51 percent ABV, and also non-chill filtered with no color added. The concept behind this was to explore how blends change over time—the whisky from the 1970s, for example, might be very different from that of the 1990s. So this series is an attempt to capture the spirit of four different types of historic blends, with the first inspired by the late ’80s. There are malts from Caol Ila and Glendullan included here, along with grain whiskies from Cameronbridge and Girvan and some mature blended stock. Peated and unpeated malts are in the mix, and all were aged in a variety of cask types. “Ultramarine and the whiskies that will come after it are not recreations,” said Saxon. “That isn’t possible. They are instead tributes, our way of reimagining the DNA of some great blends of the past.”