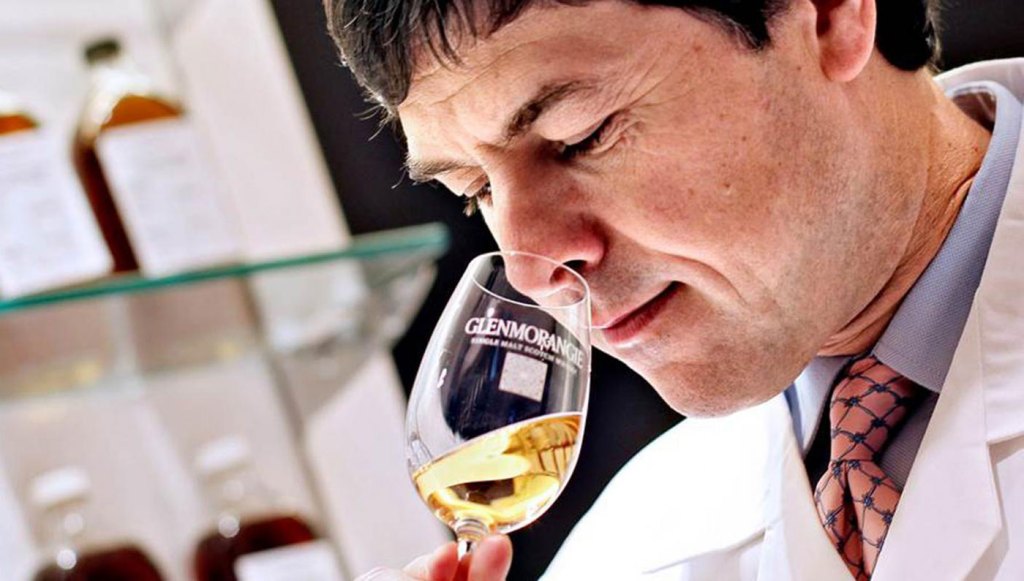 The latest offering from Glenmorangie is truly special: five excellent bottles from the 1970s—some the very last of their kind—recently rebottled and being sold as a set, appropriately called the 1970s Collection. Because these bottles are so rare, only 10 sets will ever be created; three will be available in the U.S. as it’s the brand’s largest market. While enjoying a very special opportunity to taste these excellent and extremely rare whiskys, we also seized the chance to chat with the venerable distillery’s director of distilling and whisky creation, Dr. Bill Lumsden.

Tell us about the first time you tasted Scotch.

Well, there’s two parts to it. And the first part is that my first-ever experience of Scotch whisky was not such a happy one, and it ended up with my friend and I getting a beating from his big brother because we drank a bottle of whisky and started messing around with his prized Gibson guitar and got blood all over the case. That’s a sordid story. That was when we were 17.

But in 1984, I was a student, and students by their very nature are quite experimental. A few of my friends were starting to talk to me about single malt Scotch whisky and I thought, Right, I know malt whisky is regarded as being higher-end, so I thought, I’m going to get into this. And at a party, someone offered me a glass and I thought, I have to try this. And it was just an incredible coincidence that it was Glenmorangie 10-year-old. Now the likelihood was, it was going to be either Glenmorangie or Glenfiddich or Glenlivet or something like that, but it was Glenmorangie. And I marveled at the softness and complexity of palate compared to the fairly rough blended Scotch whisky I’d tried before. After that, I started experimenting a lot, and there was a lovely old bar I used to go to, just off the Royal Mile in the Old Town in Edinburgh, called the Jolly Judge, and it did really carry a nice range of whiskys. So on my student grant I used to go there once a week or once a fortnight and try a different malt whisky and started to get a feel for all the different ones out there. So as I said, it was 1984 when I had my first taste of it, and that pretty much got me hooked. It also got me thinking that’s where my career path lay.

Was it a fairly straight line between that and where you are now?

So what’s your drink?

If I’m drinking the Glenmorangie range, I like the original—that’s probably my favorite. It’s the purest one. Apart from that, I’m fanatical about wine. I love wine; I’ve got a wine cellar at home. So whisky’s my life, but wine is my hobby.

What wine do you drink?

If I’m drinking white, I love white Burgundy, Mersault, Montrachet; I love Condrieu in the Rhone Valley; I like Alsace wines like Pinot Gris and Riesling. Gewürstraminer’s a little bit too perfumed and sweet for me. Red, oh, I just love Napa cabs. I love Sangiovese, Tuscan wines. I like Piedmonte; I love Ribiera del Duero from Spain; Bordeaux; Burgundy. I have very eclectic taste when it comes to red.

It sounds like it. So what’s the perfect situation in which to enjoy some Scotch?

That’s an almost impossible to question to answer, because there’s so many different ones. My favorite is either with some very close friends in my home, so I can open one of my very special bottles and treat them to it; or, after a long hard day at work, in my favorite wingback leather armchair with my favorite glass, just sitting, sipping, and contemplating things. So there’s a solitary moment and there’s a more convivial moment.

Other than at home, do you have a favorite place in the world to drink Scotch?

My favorite place in the world to visit is Tokyo, which I just find such an incredible, fascinating, beautiful, crazy city. So I like drinking whisky there, and I’m quite partial to a highball, and they just seem to make it so well in Japan. The bartender there is a very respected craftsman. A nice highball in Tokyo is just to die for.

Do you have a favorite bar or restaurant in Tokyo?

Too many to mention. My favorite style of restaurant is what they call an izakaya, where you can get just about anything, so I like a typical izakaya where I can get a bit of sushi, a bit of sashimi. The most memorable meal I’ve ever had in my life was at the teppanyaki restaurant at the top of the Imperial Hotel in Tokyo, which is a grand old dame, an old-fashioned hotel. And that night, my goodness, we had everything. We had fabulous sushi and sashimi, we had whole lobster, we had Kobe beef. We had huge big abalone as well, and the best wines and whiskys. And I reckon, for the six of us—and this is about 10 years ago—I’m sure the bill was way north of 10,000 pounds. But it was such a sublime experience.

I’m a complete shopaholic, and I buy ridiculous amounts of clothes. Missoni is one of my favorite brands, and I’ve got loads of Missoni scarves and ties and sweaters. One of my biggest regrets is that I was in Hong Kong about eight years ago and I visited the Missoni boutique in Lee Gardens, and they had this incredible overcoat. It was a dark gray wool overcoat, and when it turned in the light, woven within was the Missoni zig-zag pattern in multicolors. And it was fearsomely expensive. But I’m kicking myself that I didn’t buy it, because I’ve never seen anything like it in my life. So probably clothes.

How would you say that you’re living the good life?

I’m living the good life in that I’m working in something I absolutely love and adore, and it’s given me the opportunity to experience so many different things. And when I travel, I’ll always have at least one night off if I can, where I’ll go and have a nice meal. Last night I went to Babbo. I had lamb chops with pesto and mint. I was rather boring in my starter in that I chose the Babbo caprese, but I love caprese. It was the best mozzarella di bufala, and multicolored tomatoes—it was great.