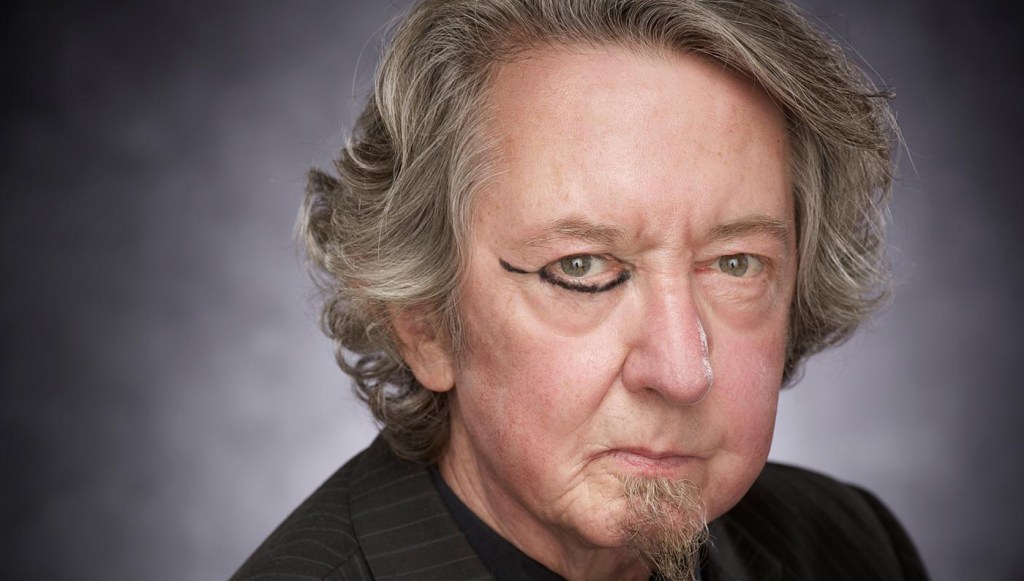 Some would say that Gaz Regan is kind of the Keith Richards of the cocktail world. He’s truly a booze-industry legend; he knows seemingly everyone and possibly even everything having to do with bartending. Among his accomplishments: He’s written more than a dozen books on cocktails (The Bartender’s Bible and The Joy of Mixologyamong them, and most recently, The Negroni: Drinking to La Dolce Vita, with Recipes & Lore). He’s also the founder and host of Cocktails in the Country, which originally ran between 2001 and 2007 and focused on drink-mixing skills; it was revived this past year and will continue next year as well, now teaching how to become a more “mindful” bartender. During it all, Regan has experienced some life: love, loss, cancer of the tongue. He’s also, he says, one of the happiest people on Earth.

He recently gave a talk to a few dozen bar-industry folk at NYC’s The Dead Rabbit, the inaugural NYC installment of The London Sessions. Afterward, he graciously spent a few minutes with us to give his Thoughts on Taste.

Okay, first off: What’s the story with the eyeliner?

Well, “bartender” is a “look at me” profession. So bartenders have handlebar mustaches, huge beards, tattoos. It’s all about “look at me.” So a few years ago, I was coming to an event in Manhattan, and I thought, I’ll do eyeliner. And that’s all it is.

How do people react?

Well said. What do you consider to be your biggest accomplishment so far—what are you most proud of?

You know that guy I mentioned, Quentin Crisp? You know the story I told about when he said, “I’m not going to do that because people wear funny clothes”? He wrote about that in one of his books. So I am in one of Quentin’s books, and that is my biggest accomplishment. [See below for the story.]

It is, it is. Quentin was like major, yeah.

God, that’s such a tough question. I think I’ve learned that everybody, every person, on the face of the earth, only wants one thing: Peace, a roof over their heads, a meal, a drink. That’s it. But that’s everybody. We are all exactly the same. And once you know that, you can key in to everybody, once you know that we’re all here, fighting the fight, getting through another lifetime, and making it work.

What would you say is your greatest indulgence?

And what would you make with it?

But a lot of people don’t like the idea of using such expensive products in cocktails. But I love it. As long as it’s free [for me], I’ll mix it.

And, finally, how would you define “The good life”? And if you think you’re living it, tell us about that.

It’s all about being happy. It’s about nothing else. This life is about love and being happy. And that is key. I am, I think, one of the happiest people you’ve ever met.

And why is that?

Because I know everything will be okay. When you get hit by things like my cancer, so what? I know that was sent to me for a purpose. I got cancer in order for me to wake up to a spiritual life, as far as I’m concerned.

And here’s that story about Quentin Crisp, as Regan recounted it during his talk:

I was hired as the general manager of the Market Diner and Spotty Dog Bar, on Eleventh Avenue at about 43rd Street. It’s a freestanding diner, and this group of investors bought it; they hired me as GM, and we spent six months putting it together. So there was this diner, a classic diner, and then on the side was the weirdest bar you ever saw. On the wall, there were murals of Dalmation dogs doing circus tricks—jumping through hoops and stuff. The bar was a W shape, very strange, and on the back of it was a cocktail lounge with a unisphere and lilac banquettes and everything. This is the only cocktail bar I’ve ever f**king worked at. This is it. So they said to me, ‘What are we going to do with this bar?’ And I looked at it and I said, ‘It’s the Spotty Dog Bar and Unisphere Cocktail Lounge.’ And I did this cocktail menu—this is 1992; we had monkey glands, we had sazeracs, and we had mint julep jelly shots made from scratch, mint julep with gelatin. We served Moscow mules. We had a Jekyll and Hyde cocktail that was made with dry ice. I think we were the only people in America using dry ice for cocktails in 1992. And, the best thing about this was… [long pause] It was a complete f**king failure. Complete. What happened was that some of the investors backed out like a month before we were due to open. So we opened with a completely untrained staff; didn’t even know the computer systems, and it was f**king mayhem. It was horrible.

So toward the end, when we were really close to running out of money, I had a bright idea. I said, ‘You know what? The Spotty Dog Bar, we’ll turn it into a gay bar! Maybe that will save us.’ So on Halloween of 1992, we reopened the Spotty Dog Bar as a gay bar and, as a special guest, I got Quentin Crisp to come. Quentin is one of my absolute heroes. He was an overtly gay guy from London who wrote a book called The Naked Civil Servant. They made a movie of it; it was with John Hurt playing Quentin. In his book, if you read it, you’ll find out that in the 1930s, Quentin Crisp, who was very effeminate, would put on makeup, put on feminine clothes, his hair was always pretty effeminate, and he would walk out into the streets of London and get the crap beaten out of him. Know what he did? He went home, fixed his makeup, and went back out again. Quentin taught me one of the finest things in life. Quentin always said, ‘I refuse to be anybody other than who I am.’

I’d met Quentin in my North Star Pub years, when we hired him to judge a competition. We had no money, so when I called him—and his name was in the White Pages—I said, ‘Listen. We’ve got no money; we’re looking for a celebrity judge.’ He said, ‘Well, you’d have to send a driver for me.’ I said, ‘Yep, that we can do.’ He said, ‘And you would have to buy me dinner.’ I said, ‘Yep, we can do that too.’ And he said, ‘And a few drinks, of course.’ I said, ‘Yeah, yeah, yeah.’ So the day of the event arrived, and I phoned him; I said, ‘Quentin! We’re sending a car for you. Where do we pick you up?’ He said, ‘I live on the street with the Angels.’ I said, ‘How’d you get that turn?’ He said, ‘I see the Harley Davidsons.’ And he lived next door to the Hell’s Angels headquarters on 12th Street. Every word out of his mouth was quotable. He said, ‘Tell your driver to look for men as tall as trees and twice as shady. And I shall be there.’ Every f**king word out of his mouth was quotable.

So, back to the Spotty Dog gay bar. I phoned Quentin, told him what was going on, I said, ‘We’re having a big party; turning it into a gay bar; we want you to be the guest of honor on Halloween next week.’ He said, ‘I don’t think so.’ I said, ‘Why not?’ because Quentin would go anywhere for a free meal. He said, ‘Well, on Halloween, people dress in strange clothes, and I’m not sure that I approve of that.’ And I said, ‘Quentin, you wear strange clothes every f**king day of the year.’ And there was silence, and he said, ‘Then I shall be there.’ So Quentin came, and we had a really fabulous night… and two weeks later, the whole f**king place closed. It was just too late.

Bonus: Read more stories Regan shared during his talk at The Dead Rabbit.