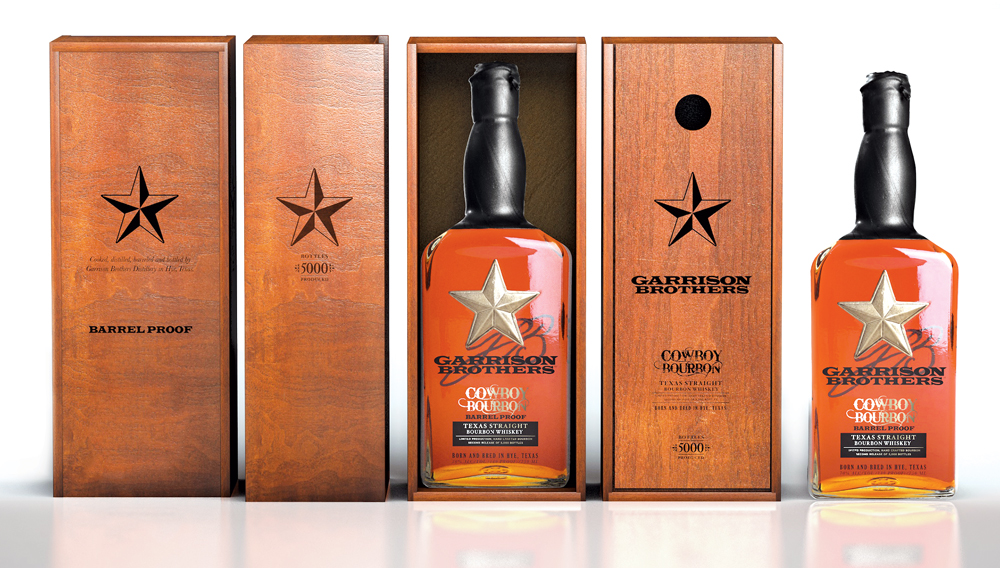 A sophisticated barrel-proof bourbon emerges from deep in the heart of Texas.

The initial batch of Cowboy Bourbon was released at 136 proof. It was blended from the 10 best-tasting straight whiskeys aging in barrels at the distillery, which is located in the town of Hye, about 50 miles west of Austin. At 135 proof, the 2015 release is equally potent, but thanks to a more elaborate ­recipe—“a strange mix of barrels and time,” says Garrison—it tastes nothing like its predecessor. “The original Cowboy had so much of the barrel flavor,” he says. “This one is much more refined and elegant.”

The 2015 Cowboy Bourbon was distilled from yellow dent corn grown on farms in Dallam County, in the northwest corner of the Texas Panhandle. The spirit was then aged in 15- and 30-gallon American white-oak barrels (charred to varying degrees) for slightly more than two years. It continued to mature in 60-gallon oak casks from France’s Limousin region, where Rémy Martin sources casks for aging its Cognac. “No one had finished bourbon in Limousin oak [before],” says Garrison. “They had used sherry casks or port casks, but we wanted to finish it in a lot of unique barrels, so no one could match the complexity.”

The bourbon’s complexity reveals itself right away. The nose bursts with notes of burned sugar, candied pecans, and molasses, belying the spirit’s potency. Garrison suggests a slow first sip, to adjust to the high alcohol content, which is somewhat mitigated by the spirit’s syrupy texture. Once your taste buds are indoctrinated, the vanilla and white-chocolate flavors become prominent, and they are followed by notes of maple syrup and brown sugar.

The first Cowboy Bourbon, which was limited to 600 bottles and priced at $150, sold out almost immediately. This second release is considerably larger (5,200 bottles) and is anticipated to sell for around $200 per bottle. Garrison Brothers bourbon is available in several states, including New York, California, and Florida, but it is distributed most widely in Texas—a courtesy to the local communities and establishments that supported the distillery in its early years. “Around here,” says Garrison, “you dance with the one who brung ya.”

Garrison plans to release the next batch of Cowboy Bourbon in 2017 and says that, like each of the first two releases, it will have a character all its own. “There’s so much room in the bourbon category for experimentation,” he says. “We have to continue striving to create a superior bourbon from the last one we made. We’re trying to top ourselves every time. If we don’t, we’re not doing our jobs.”