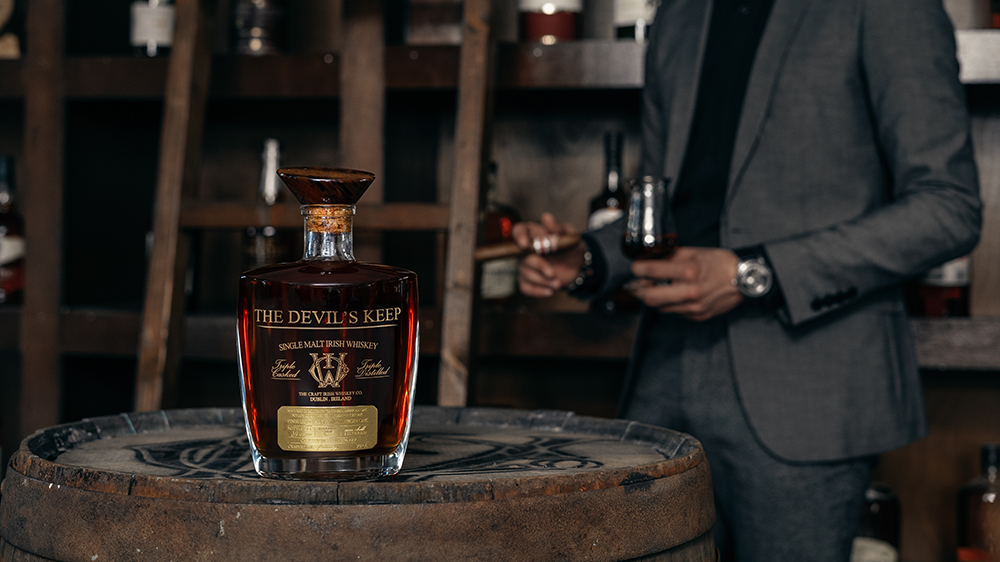 When it comes to the finer things in life, age is frequently a virtue. Which is why Craft Irish Whiskey Co. is launching with the oldest-ever triple-distilled whiskey at the end of the month.

The high-end brand’s inaugural release, the triple-distilled, 29-year-old single malt The Devil’s Keep, is scheduled to go on sale next Monday. But this isn’t any old launch spirit we’re talking about here, because the brand expects the limited-edition single-malt to go a long way towards restoring Ireland to its rightful place atop the global whiskey hierarchy.

Despite having invented the spirit all the way back in the 14th century, Ireland has watched its whiskey making reputation suffer greatly over the last two centuries, during which time Scotland’s has soared. Craft Irish Whiskey Co. has had enough of this, though, and plans to arrest this slide by taking aim at the luxury segment of the market.

Up first, is The Devil’s Keep, a single-malt whiskey that starts its journey in American oak casks previously used to store bourbon. From there, it is transferred to French oak barrels that used to house a viscous Tawny Port, before a final finish in virgin Hungarian oak. This “holy trinity” of maturation gives the spirit a smoky profile with hints of vanilla, caramel and toasted sugar.

Each bottle of Devil’s Keep comes stored in two custom-made cases secured by a bespoke Japanese-style lock. In addition to the Tiago Russo-designed bottle, the cases also hold a carafe of pure Irish spring water, an “Angel’s Share” atomizer, a jar of malted barley sourced from malting house as the single-malt, two custom-designed glasses and obsidian whiskey stones.

“For many years Scotland has dominated whiskey through the sheer breadth and depth of its offering. They’ve offered everything from lower-shelf, mass-produced blends to mid-shelf, higher-quality household names, as well as top-shelf brands. Yet, there has always been a gap in the market for ultra-luxury whiskeys,” founder Jay Bradley said in a statement. “Born from a conversation with my late father, The Craft Irish Whiskey Co. has a single mission: to create the finest whiskeys Ireland has ever made and to redefine global perceptions of luxury, while building a legacy.”

The Devil’s Keep’s age is not all that sets it apart from other Irish single-malts. At €10,000 (about $11,840) it’s also the most expensive first release in the history of whiskey. If all that sounds appealing to you, you can grab yourself a bottle on the Craft Irish Whiskey Co.’s website on Monday.