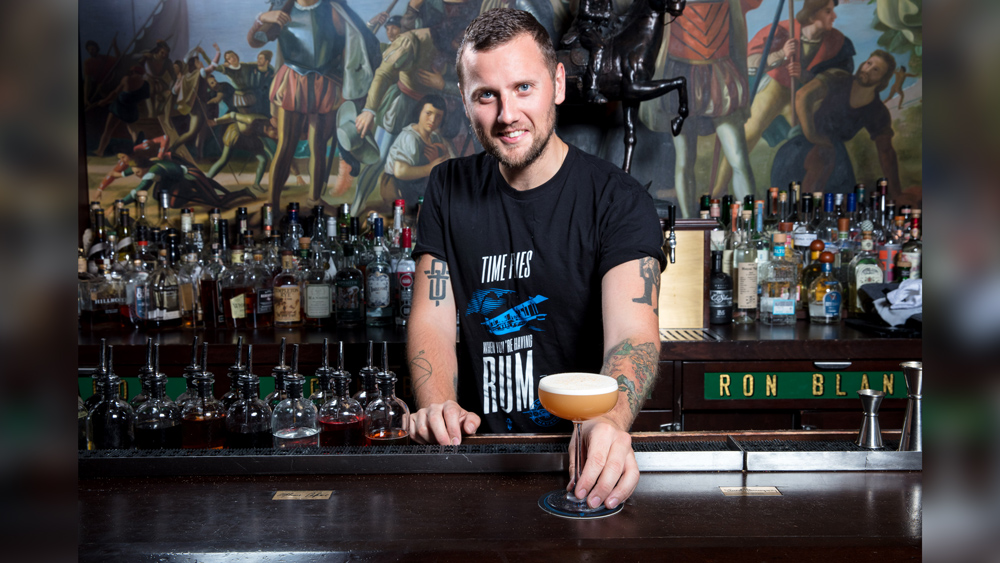 Jack McGarry was introduced to the basic principles of the bar business at the tender age of 15 in his hometown of Belfast, Northern Ireland. There, he eagerly assisted the seasoned pros behind the stick at a joint called The Hunting Lodge. It turns out McGarry was a very good learner. By 17, he had tended bar at The Northern Whig—where he met a chap by the name of Sean Muldoon—and at one of Belfast’s most renowned cocktail bars, Tatu Bar & Grill. Following a stint at Milk & Honey in London, Jack McGarry—then all of 21 years old—packed up his bar tools and headed to New York City.

Three years later, in 2013, he was onstage at the Tales of the Cocktail Spirited Awards (the Oscars of the spirits industry) accepting the award for World’s Best New Cocktail Bar. That’d be The Dead Rabbit Grocery and Grog, the gorgeous multilevel Lower Manhattan watering hole he and Muldoon founded. Since then, there’s nary a prestigious industry award The Dead Rabbit hasn’t won. In 2016, the bar ranked number one at the World’s 50 Best Bars event held in London.

Just last month, the latest McGarry-Muldoon collaboration, the Cuban-inspired BlackTail at Pier A in Manhattan, was honored as the Best New American Bar at the 2017 Spirited Awards.

RR: Do you prefer to be called a bartender, mixologist, or some other title?

JM: Bartender. Mixologist makes me think of doctors, and I hate going to the doctor.

RR: Growing up in Belfast, did you ever imagine coming to America and experiencing the level of success you’ve achieved thus far?

JM: I’ve always believed in my ability and my work ethic, and I’ve never really worried about the future because I knew I’d be taken care of if I worked hard and right. However, what we’ve done and achieved so far has gone well above my wildest aims.

RR: What are some keys to running a successful drinking establishment?

JM: Of course, amazing cocktails are a prerequisite. After that, it’s all about the details.  Hospitality starts when a guest begins interacting with your product, which is no longer confined to the four walls of your venue—although, of course, that’s still the most important element. Your website has to be cutting-edge, your social media strategy has to be sharp, your branding tone has to be coherent and consistent, you have to engage in your reviewing platforms and behave like a professional brand.

We pay close attention to every detail of every single aspect of our operations—from the bathroom experience to making sure the bar is always maintained and improved. Then our digestible product: The drinks and food go through intense research and development. Everything we do, we do to the absolute best of our ability.

RR: What’s your favorite base spirit for making cocktails and why?

JM: Well, I’m a huge advocate of Irish whiskey. Similar to Irish Pubs, Irish whiskey has been pigeonholed as an inferior product—a shooting spirit—which couldn’t be any further from the truth. It’s one of the most diverse and adaptable spirit categories in the world due to the range of Single Grains, Single Malts, Single Pot Stills, and Blends. At The Dead Rabbit, we’ve currently got over 200 Irish whiskey labels, and we’re actually in the process of writing a book about Irish whiskey that’ll be out next year.

RR: What’s the best advice anyone’s ever given you about running a bar?

JM: Jim Meehan—of the esteemed N.Y.C. speakeasy, PDT—once told me you have to “listen to the building.” He doesn’t mean press your ear to the bricks and mortar but always be listening, watching, and probing to improve the venue. I’ve seen many people open a bar and think the hard part is over. The hard part is only starting at that point. Your product constantly needs to innovate and evolve, and nothing is ever, ever perfect.

RR: What are the world’s five best drinking towns?

JM: New York is filled with bars with attitude and grit. London has so many great hotel bars and boozers. No city in the world has better pubs than Dublin. And I totally love Cuba and Cuban culture, so Havana makes the list—there’s nothing quite like being on the Malecón with a drink in hand. And lastly, Sydney, which has many large-venue cocktail bars and an overall easygoing, relaxed atmosphere everywhere you go.